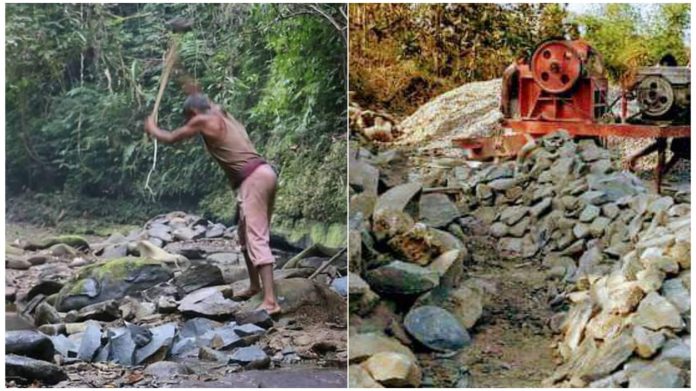 Hill Voice, 19 January 2022, Bandarban: It is difficult for those who know Matamuhuri, known for its strong currents in the recent past, to digest the news of the naval crisis in this river.

But this is the reality. Just a century and a half ago, the terrifying existence of the river was considered as a reflection of nature’s rudrarupa.

The Matamuhuri River originates from a remote hilly area in Alikadam upazila of Bandarban district and descends to the plains and falls into the Bay of Bengal over Cox’s Bazar district. The Matamuhuri is a mountain river exclusively. According to local elders, the locals are responsible for today’s fading condition of the river.

It has been seen on the ground that there are innumerable streams, canals and hills at the source of Matamuhuri river. There are protected Matamuhuri reserves on both the banks of the river Matamuhuri. Its area is 1 lakh 3 thousand acres. In terms of size, this reserve forest is the second largest reserve forest in Asia.

The extraction of stones from the various springs of the Matamuhuri Reserve at Alikadam in Bandarban does not seem to be stopping. And some local influential people have been accused of collaborating in this work. They also said that Nazrul Islam, Farid Alam, Md. Shaheen, Md. Yunus Mia, Md. Yunus and many other big stone eater syndicates are extracting stones in Chhoto Beti, Boro Beti, Shil Jhiri, Ward 7 of Matamuhuri Reserve area. The stones extracted from this reserve are used for government development.

Although the stone is being extracted from the reserve area freely every year, the administration does not have the information of those stone extractors. The sound of stone breaking machines is not heard in the administration and forest department, as a result of which the main culprits of illegal stone extraction have remained out of reach.

Meanwhile, as a result of free lifting of stones for a long time, the springs of the mountains are drying up. Agricultural cultivation is declining due to water crisis. Different ethnic groups of indigenous peoples living in remote hills including Mro, Tripura, Marma, Thanchangya, Chakma are facing water crisis.

According to the locals, at present, stones are being extracted freely from various fountain -springs of the reserve area including Shil Jhiri, Boro Beti and Chhoto Beti near Gorjon Karbari Para. About 30,000 cubic feet of boulder stone has been stored there.

Day after day and year after year, the rocks are being lifted from the various ridges of the hills, but they are getting across due to some unseen force.

On condition of anonymity, a local said that some influential people of Khuilla Mia Chairman Para area of the upazila and a huge syndicate of stone eaters were involved in stone quarrying.
Member of Ward No. 7 of Kurukpata Union said, “We have banned stone lifters several times.” However, the upazila administration and the locals are lifting stones by ignoring the restriction. We locals are helpless to them as the stone businessmen are influential.

Kurukpata UP chairman Kratpung Mro said, “I went to the area a few days ago to get the news of the quarrying. It is true that they are lifting stones, but I do not know who is lifting them. However, I have raised the issue in the monthly meeting Upazila Parishad.

A conscious citizen of Alikadam said on condition of anonymity, “I do not understand why they are not being brought under the law even though they have been removing stones and cutting down trees from areas like Matamuhuri Reserve for years.”

Aware citizen Men Ching Mro said the Forest Department and Matamuhuri Range conduct only nominal operations. If they had enforced the right law, no one would have dared to lift stones from the reserve. Officials at the Matamuhuri Range told the stone traders before leaving for the expedition and later conducted the expedition.

After the operation, it was seen that there were no stone throwers and workers, the officials of the forest department did not see any stone crushing machine. In this way the stone eaters get crossed again and again.

In this regard, Matamuhuri Forest Officer Mohammad Abul Qasim said, “The executive officer has instructed to investigate the extraction of stones from the reserve area and file a case against the persons involved.” We will go to that area very soon and start investigation.

It is to be mentioned that on December 25, 2021, when the representatives of various newspapers working in Alikadam Upazila went to collect the news of stone extraction, the stone throwers got together and attacked them, snatched their mobile cameras and beat the journalists. But the administration has not yet taken any action in this regard.