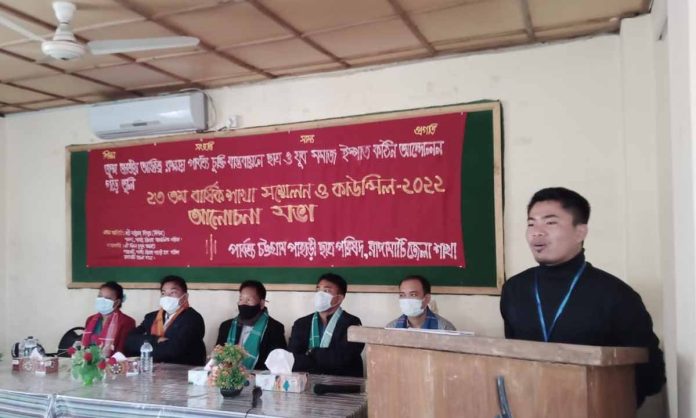 Hill Voice, 17 January 2022, Rangamati: The 23rd Annual Conference and Council of the Rangamati District Branch of Hill Students Council (PCP) has convened with the slogan ‘to build an united tougher movement by the students and youths to implement the Chittagong Hill Tracts Accord to protect Jumma national existence.’

Sadhuram Tripura (Milton), a member of the Chittagong Hill Tracts Regional Council, was present as the chief guest at the event which was presided over by Jagadish Chakma, General Secretary of the Farewell Committee and chaired by Milon Kusum Tanchanga.

Speaking as the chief guest at the conference and council, Sadhuram Tripura (Milton), also central member of the Parbatya Chattagram Jana Samhati Samiti (PCJSS), said that on December 2, 1997, the Jumma people of the Chittagong Hill Tracts reached the Chittagong Hill Tracts Accord with the government with high hopes and beliefs. But, sad but true is the fact that today the two eras of the Accord have come to an end.

Due to the imposition of the Operation Uttoron, the military authorities have been playing a decisive role in all the important issues of the CHT and have been obstructing the implementation of the CHT Accord in various ways.

As proof of this, false cases have been filed against the leaders and activists of PCJSS, which is working in favor of the CHT Accord, calling them extortionists, terrorists and separatists, followed by arresting them, sending them to jail, detaining them and torturing them.

He further said that Bangladesh is far away from the current trend of democracy as the politics of present day Bangladesh was supposed to be. M N Larma dreamed of a beautiful country with many cultures, many nations, many languages. This is evident from his parliamentary speech. Instead of that dream country of M N Larma, we see today in 50 years of independence, Islamic expansionism has been established in Bangladesh, extremist Bengali nationalism has developed.

As a result, more than 50 ethnic groups of indigenous peoples in the country are losing their culture, their customs, their language. Their existence is on the verge of disappearing today. He called upon the leaders and workers of today’s PCP to work door to door, man to man to implement the CHT Accord.

Speaking as the special guest, PCP central president Sumon Marma said, “PCJSS or PCP does not believe in words but in works.” The rights and freedoms of different nations of the world have come from the hands of this young student society. Thus, today’s young student society cannot shy away from its historic responsibility.

Today’s Jumma student society under the leadership of PCP is committed to strengthen movement for implementation of the CHT Accord. He urged the Jumma student community to build a united tougher movement to implement the Accord.

Sagar Tripura Nantu, assistant organizing secretary of the Rangamati district branch of the CHT Youth Association, said the Chittagong Hill Tracts was losing its status as a Jumma-inhabited area due to non-implementation of the Accord. Are we going to be annihilated or will survive, Jumma people are standing in such a reality today. Today’s young student society has to choose one.

Referring to the history of the Jumma people only losing history, he said that the Jumma people have always been oppressed, neglected and oppressed in Bangladesh from the British period to the present. In order to overcome this, the Jumma student community needs to be prepared to shoulder its historic responsibility, he said.

Mranu Sing Marma, central organizing secretary of the Hill Women’s Federation, said that the conspiracy to destroy the Jumma people of the CHT by building the Kaptai Dam in 1960 was still going on. We have to build resistance of our youth against that conspiracy.
At the beginning of the conference, a minute of silence was observed in memory of all the martyrs who sacrificed their lives in the struggle for self-determination of the Jumma people of CHT.