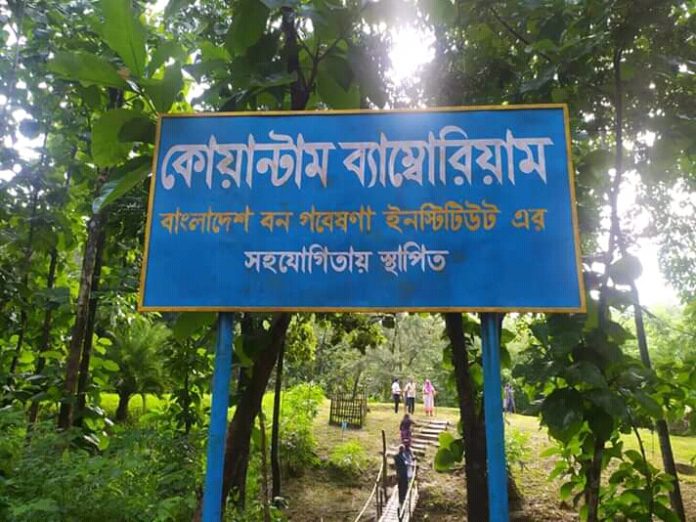 Hill Voice, 11 October 2020, Bandarban: It is alleged that the Quantum Foundation has forcibly occupied an area of ​​approximately 2,000 acres of indigenous Mro people and permanent Bengali residents since 2001 to date in Doluchari, Lulein and Bumu mouzas in Sorai Union under Lama Upazila of Bandarban district. Not only the indigenous Jumma people but also the permanent Bengali residents and settler Bengalis have been the victims of the Quantum Foundation’s land grab. One of the victims of the Quantum ‘s land grabbing is a Bengali farmer named Abdur Rashid.

The Quantum Foundation has once again been accused of occupying a farmer’s arable farmland in Lama. Aggrieved farmer Rafiqul Islam, son of Abdur Rashid and locals said that the Quantum Foundation was occupying the land of one villager after another. there is no remedy even after complaining against them as the Foundation has money, power and manpower. Those who speak out against them are harassed with numerous lawsuits. Quantum is a name of terror to the people of this area.

The victim Rafiqul Islam said, “My father Abdur Rashid owns 4.50 acres of land in Lambakhola area of ​​No. 303 Daluchhari mouza of Sorai union of Lama upazila. There is 1.0 acre of land in the Holding No. 49 owned by my uncle Tamiz Uddin. He lives in Jhenaidah. He sold the 1.0 acre of land to the Quantum Foundation. But Quantum, in an attempt to occupy my uncle’s 1.0 acre of land, forcibly cordoned off 4.50 acres of land owned by my father with R/625 Holding and 0.80 acre of khas land on the bank of the canal. I have filed a case in the Lama Senior Judicial Magistrate’s Court which is CR Case No. 49, dated 18 March 2020.

He further added, “My father and I sell 4 acres of land with R/437, 3.50 acres of with R/445 and 3.50 acres of land with R/446 to the Quantum Foundation on the north side of this land in the same area. Even there, Quantum has taken over 14 acres instead of 11 acres. The people of this area have become helpless to them. We are seeking the intervention of the government and law enforcement forces.”

Md. Khalilur Rahman, an elderly man from Lambakhola area, said that on 10 October 2020 Saturday, a villager named Bazal Ahmed was detained by Quantum people on his way back from his land in Dhenkichhara area. Later, the police from the police outpost rescued him. Abul Hashem, in-charge (police inspector) of Sarai police outpost, said, “I went and brought Bazal Ahmed myself when I heard that there was trouble.” He was later advised to go to his land after informing the police.

Md. Ashraf Ali, UP member of the ward, said that the locals were outraged by the unjust oppression of Quantum Foundation. They are doing whatever they want because they have money, power and manpower. The anger of the people of the area is increasing day by day. They can clash with the people at any time. They have hundreds of people. They can occupy land overnight brining and gathering people within a moment. Quantum has occupied the land owned by Rafiqul Islam’s father with people day and night. At that time the people of Quantum beaten up and injured Rafiqul Islam, his mother and sister. They did not even get justice.

When the Quantum Foundation called Ariful Islam of the organization on his mobile phone, it was not possible to give a statement as he did not receive the call. Sorai Union Parishad chairman Farid-ul-Alam said, “We are ordinary people. The Quantum has the relationship with all the great people of the country including ruling section of people and state forces. They will not listen to us.”

It is to be noted that in 2001, some 2000 acres of lands was forcibly occupied by ‘Quantum Foundation’ in the areas of Doluchhari, Lulaing and Bomu Mouzas under Soroi Union of Lama Upazila – the vast lands so occupied were under possession of the indigenous Mro people. In addition, due to forcible occupation of lands by the ‘Quantum Foundation’, 250 Mro families are being deprived from practicing the Jum cultivation. Consequently, their lives and livelihood have been threatened thereby.

The Quantum Foundation continues to occupy the lands of indigenous people with the help of some local influential persons in exchange of money under certain technique to avoid legal problem. It is known that the organization arranges some persons to purchase lands and then transfer the ownership in donation to Quantum Foundation. It is also learnt that more amount of lands is occupied forcibly than the lands actually purchased through illegal manner. For instance, disputes have arisen with many others including 3.0 acres of lands of one Mro family having common boundaries. Allegation has arisen that in all the cases involving purchasing and transferring of ownership, the legal obligations to take prior approval from the Hill District Council authority have not been complied as per the law. The matter does not end up here, the allegation also adds that the organization encourages the influential and rich people coming from Dhaka to purchase lands in and around the Quantum-run school and college. Thus, how silently the eviction process of the Mro ethnic people from their lands is getting escalated.