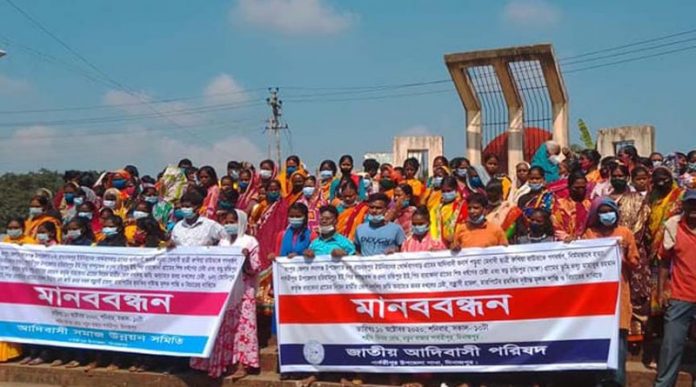 Hill Voice, 10 October 2020, Rangpur: A human chain and demonstration was held by Jatiya Adivasi Parishad and Adivasi Samaj Unnoyon Samity at the premises of Parbatipur Shaheed Minar demanding rapists and murderers of Rukhia Raut, an indigenous college girl of Mushar people in Badarganj sub-district of Rangpur district and land grabbers who attacked indigenous villagers at Chandipur village of Parbatipur in Dinajpur.

Speakers said that recently Rukhia Raut, a meritorious honours girl of indigenous Mushahar people in Khordda Bagbar village of Ramnathpur union of Badarganj upazila of Rangpur district was brutally killed and another one was attempted to rape in Barkona village of Parbatipur upazila, and the land grabbers tried to occupy the land occupied by Niren Mardi and carried out terrorist attacks.

The speakers demanded speedy trial of all these incidents. The speakers also demanded the formation of a separate Land Commission for the indigenous people of plain lands and the returning of lands of indigenous people back by setting up special tribunals in the districts. More than 300 men and women from Parbatipur Upazila participated in this human chain.