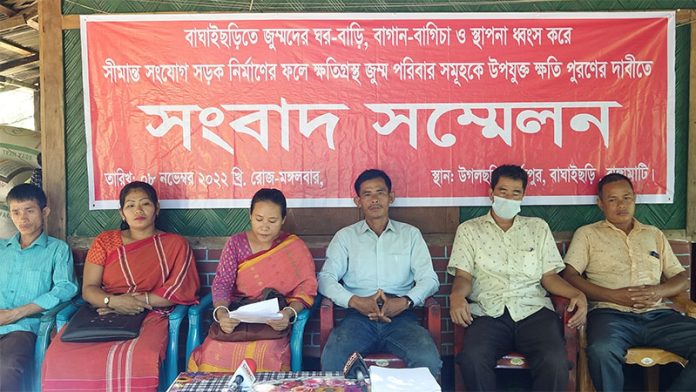 Hill Voice, 8 November 2022, Rangamati: The 188 affected Jumma families held a press conference to demand compensation for their loss due to damage by Border link road construction work in Baghaichhari upazila in Rangamati district.

Today (Tuesday, November 8) morning, Rashika Chakma, a reserved woman UP member of Baghaichari union read out a written statement on behalf of the affected Jumma families in Ugalchari Arjapur village under Baghaichari Union.

While reading out the statement, Rashika Chakma said that due to the construction of the border link road in Baghaichari and Sarboyatali union of the upazila, the houses, plantations, and shops of the local Jumma families have been massively damaged. But, no compensation has been given to the affected families yet. For this we have submitted a memorandum to the Prime Minister through the Deputy Commissioner. Still we have not received any compensation till now. Hence we demand the adequate compensation. The houses, shops and plantations of 11.54 acres land of two unions in the upazila have been destroyed.

In addition, Rashika Chakma said while reading out it, the people of these village are economically marginalized and deprived too. In 1997, the Chittagong Hill Tracts Accord was signed and the Land Commission was formed to settle the land disputes in the Chittagong Hill Tracts (CHT). Since the Accord contains provisions for the rehabilitation of the internally displaced persons we have had high hopes. But in the last 25 years, we have lived in great anxiety and despair as the land dispute is still unresolved and the internal displaced people have still been unrehabilitated due to the non-implementation of the CHT Accord.

She added that we are deeply disappointed and worried, the construction of the border link road has been taken up ignoring and trampling our views, interests and rights. We feel that our constitutional, civil and fundamental human rights are being violated in this regard.

Nirupam Chakma, a former UP member of Baghaichari Union, said, ‘Due to the prevailing situation in CHT, the people from Longudu, Kaukhali, Barkal, Naniarchar of Rangamati district and Dighinala upazila of Khagrachari district have taken refuge and settled in these areas. They have made a living by making various orchards and plantations in the area.

He also said that 188 families in the two unions have been affected due to the construction of the border link road, but they have not been given any compensation yet. Local villagers have held protests demanding compensation but no visible initiative from the government has been taken yet. We are poor people, we want compensations.’

In the press conference, the concerned authorities including the Prime Minister have been urged to fulfil the following demands immediately-

1. To provide due compensation to the affected families for the construction of the said road immediately;
2. To settle the land disputes in CHT immediately through Land Commission;
3. To immediately implement the CHT Accord fully.

It should be noted that on 31 July 2022, Zone Commander of 27 BGB Marishya Zone, Lt. Col. Md. Shariful Abed (SGP) inaugurated the construction of this 30 feet wide border link road, 4 km from Ugalchari Aryapur to Kojoicharimukh and 15 km from Kojoicharimukh to Majhipara of Baghaichhari and Sarwatli Unions. Immediately after this, in his presence, the members of the 20 Engineering Construction Battalion of the army started the construction of the border road by forcibly destroying the shops and valuable trees of the indigenous Jumma villagers with bulldozers and tractors at the place of Aryapur Banabihar.

When the construction work of the border link road was started without any kind of discussion and their consent with the concerned local people, and considering their own losses, the affected localities first demanded the cancellation of the construction work from the road construction authority and later demanded compensation to the affected families. But even though the construction work of this road has been continued for the past three months and there has been extensive damage to the land of the concerned residents including various fruits and forest plantations, no compensation has been provided to the affected families. In this regard, a memorandum was submitted to the Prime Minister along with various local authorities, but no action was taken.