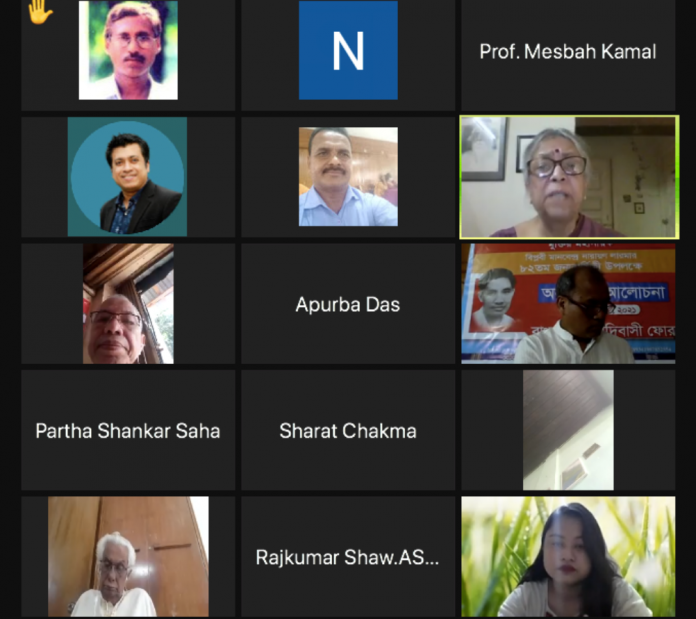 Hill Voice, 15 September 2021, Special Correspondent: In a virtual discussion organized on the occasion of the 82nd birth anniversary of the great leader and revolutionary Manabendra Narayan Larma, eminent citizens of the country have said that Manabendra Narayan Larma has fought against all hegemony. He was the voice of the oppressed people. He inspired the entire Bengali society of the country, side by side of the entire Jumma nation for struggle. He not only spoke of the rights of the Jumma people, but also all nationalities.

This virtual discussion was organized today (15 September 2021) at 11:00 am by the Bangladesh Indigenous Peoples Forum (BIPF). The program was streamed live from the Facebook page of Bangladesh Adivasi Forum. A press release signed by Dhananjay Chakma of Secretariat of BIPF was issued informing about the program.

During the discussion, Professor Mesbah Kamal said that the whole world is passing 500 years of modernity. The world’s major powers are denying the diversity of ethnic minorities. Denying the rights and diversity of indigenous peoples in particular is a curse to large states. That is also quite noticeable in the case of Bangladesh. As a result, the hopes and aspirations with which the indigenous peoples of this country participated in the war of liberation have been completely ignored.

Sohrab Hasan said that Manabendra Narayan Larma was a leader of a unique nature. He not only spoke of the rights of the Jumma people, he spoke of all nationalities. MN Larma has struggled to build an egalitarian Bangladesh, as well as fought against hegemony.

Sultana Kamal said that the young generation should be more inspired by the ideals of Manabendra Narayan Larma. MN Larma was the voice of the oppressed people. Demanding constitutional recognition of the indigenous peoples, he added that the indigenous peoples are the most backward section of the people in the country. Therefore, it is very important to give them constitutional recognition. That is why, Manabendra Narayan Larma loudly demanded the inclusion of all hardworking people in the constitution.

Pankaj Bhattacharya said MN Larma was an exceptional national leader. He inspired the entire Jumma nation to struggle as well as the entire Bengali society of the country. He has formed the Parbatya Chattagram Mohila Samiti by inspiring women to struggle.

Ushatan Talukder said that this short-lived great person born in a progressive family was rebellious, courageous, revolutionary, determined, prudent and talented leader. As he was a defendant, he was the first to be able to wage a united struggle against the Kaptai Dam. Due to which he was arrested by the government of Pakistan. As a result of the Kaptai Dam, 54,000 acres of paddy land have been submerged, about 60,000 Jumma evacuees have been living without citizenship in neighboring Arunachal Pradesh of India, which has not yet recognized them as citizens of that country. There is frustration and anxiety among the indigenous Jumma peoples as the CHT Accord of 1997 has not yet been fully implemented. He therefore urged the Hon’ble Prime Minister for full implementation of the CHT Accord.

Rana Dasgupta, General Secretary of Bangladesh Hindu Buddhist Christian Unity Parishad, said that MN Larma will be with us as long as the fight for human rights in this country continues.

Shamsul Huda said, this country is a diverse country of many languages, many castes, many races and many cultures. Even in the 50 years of independence, the rights of the indigenous peoples have not been recognized in this country. That is why MN Larma has demanded that the rights of all people be enshrined in the constitution during it is drafted.

It may be mentioned that MN Larma was born on 15 September 1939 in the famous village of Mahapuram or Mawrum in Burighat mouza of Nanyarchar upazila under Rangamati hill district. The village, along with many other villages, was submerged in the Kaptai Lake, which was created by the Kaptai Dam in the 1960s. His father Chitta Kishore Chakma was an extraordinary teacher, philanthropist and patriot and his mother Subhashini Dewan was a patient and pious woman. His uncle Krishna Kishore Chakma was a very meritorious student and a forerunner in the movement for the expansion of education in the CHT. In fact, the revolutionary and leadership role of MN Larma’s family in the movement for the spread of modern education, development of Jumma national consciousness and establishment of self-determination in the CHT was undisputed.

All of Larma’s two brothers and the only eldest sister actively participated in the movement for self-determination of the indigenous Jumma people of the CHT and set an example of unparalleled sacrifice. His elder brother Shuvendu Prabhas Larma was martyred in the same incident with him in 1983. On the other hand, his younger brother Jyotirindra Bodhipriya Larma (Santu Larma) emerged as his competent successor in his death. Jyotirindra Bodhipriya Larma (Santu Larma) is currently the President of the PCJSS and BIPF and the Chairman of the CHT Regional Council. Her only elder sister Jyoti Prabha Larma Minu was the president of the Parbatya Chattagram Mohila Samity, a women’s wing of the PCJSS.

He was elected a member of the East Pakistan Provincial Council in 1970. On 15 February 1972, under his leadership, a four-point demand for regional autonomy of CHT was submitted to then Prime Minister Sheikh Mujibur Rahman. He boycotted the Constituent Assembly session on 31 October 1972 in protest of the first constitution of Bangladesh as it termed the Jumma people as ‘Bengalis’. In 1972, the PCJSS was formed under his leadership and he was the founding general secretary. In 1973 he was elected a member of the Bangladesh Jatiya Sangsad (National Parliament) and in the same year became the President of the PCJSS.

As a member of the Constituent Assembly and an MP, he played an important role in Parliament and delivered important speeches. In Parliament, he spoke strongly for the rights of the Jumma nation as well as the rights of the oppressed, exploited, deprived and working people of the country. In Parliament, she was the first to make strong demands for women’s rights and to ensure equal rights for men and women. In his parliamentary address, he spoke of the dream of a beautiful Bangladesh, free from exploitation, non-sectarian, secular, which is equally significant today.

After the assassination of Sheikh Mujibur Rahman and his family on 15 August 1975 and when all democratic paths were blocked, he went underground. Then the armed resistance movement of the Jana Sanghati Samiti led by him and his brother Santu Larma started. While in hiding, he was elected successive president at the first national conference of the PCJSS in 1977 and at the second national conference in 1982.

On the morning of November 10, 1973, he was brutally killed along with eight co-fighters in a surprise heinous attack by the dissident clique of Giri-Prakash-Deben-Palash at Khedarchara Thum in Panchhari upazila of Khagrachhari Hill District.