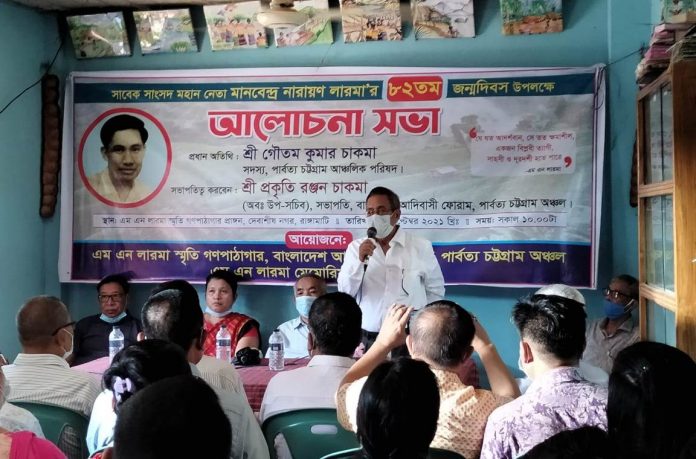 Hill Voice, 15 September 2021, Rangamati: On the occasion of the 82nd birth anniversary of Manabendra Narayan Larma (MN Larma), the speakers at a discussion meeting organized at Devashishnagar in Rangamati district said, MN Larma is a soldier of the revolutionary ideology who loves the liberation of hardworking people all over the world and is a true patriot. He did not just talk about the rights of the hill tribes, but he was vocal in raising the issue of the rights of all the workers, peasants and hardworking people of the country in a fearless voice in Parliament and the streets.

Speakers at the meeting also said that a difficult situation exists in the CHT region now. In order to overcome this situation, the student-youth of the CHT must move forward and play the most pioneering role, adhering to the principles of MN Larma.

The speakers said the CHT Accord was signed in 1997 to solve the problems of the CHT through political and peaceful means. But even though it is 24 years since the agreement was signed, the Accord is not being implemented yet. There is no alternative to full implementation of the CHT Accord to ensure peace, harmony and development in the region.

The speakers urged the government to implement the CHT Accord expeditiously and fully.