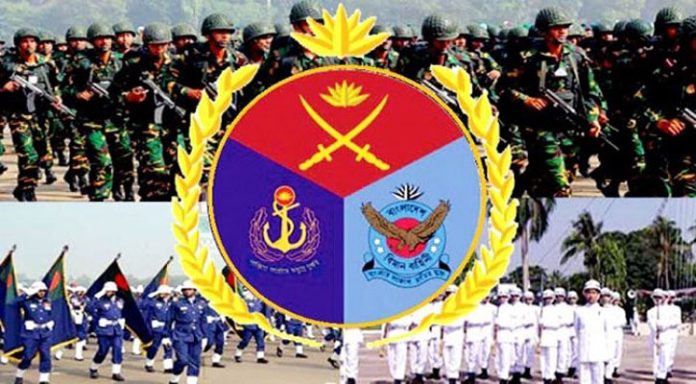 Hill Voice, 20 November 2021, Special Correspondent: It is alleged that the Armed Forces Division of the Prime Minister’s Office has directed to take immediate steps to increase strict surveillance and discourage the cultivation of turmeric and ginger in the hilly areas of the Chittagong Hill Tracts (CHT).

On August 29, 2021, in a directive signed by Major HM Mohaimin Billah Chowdhury on behalf of the Principal Staff Officer of the Armed Forces Division, titled “the issue of destruction of biodiversity and natural balance in the hill areas through arson for commercial cultivation of Jum (turmeric / ginger)” the Secretaries of the Ministry of Chittagong Hill Tracts Affairs and the Ministry of Environment, Forests and Climate Change were informed to take such action.

That directive says that “People of the hill communities living in the hills traditionally prepare land by setting fire to the hills for ‘Jum’ cultivation in the dry season every year for their traditional way of life, which is a casual matter. But with the introduction of large-scale Jum farming on a commercial basis, there is an extreme and far-reaching adverse effect on biodiversity and nature in the hilly areas.”

Four description on the subject and four opinions / recommendations were put in the directive. 6 pictures titled ‘Photography of fires in the hills for Jum (turmeric / ginger) cultivation’ were attached with the directive. Out 6 photographs, there are two pictures of ‘forest fires by hill tribes for Jum farming’ and 4 still images of ‘forest burning by hill tribes for Jum cultivation and subsequent deforestation’.

A. Regular intensive supervision by the representative of the concerned area of the forest department can be ensured so that the hill is not destroyed by cutting down / setting fire to large trees by the permanent hill tribes during Jum cultivation.

B. Strict vigilance of turmeric / ginger cultivation in hilly areas should be increased and a specific policy can be formulated in this regard. To discourage the cultivation of turmeric and ginger on a commercial basis, immediate steps may be taken to stop commercial marketing of related products and expert opinion on alternative cultivation may be sought.

C. Necessary steps need to be taken to protect the Reserve Forest and a more effective role of the Forests and Environment Department in this regard.

D. Meetings, seminars, etc. can be organized by the people’s representatives of the area and the local people in coordination with the civil administration of the area responsible for raising public awareness about environmental disasters.

Human rights activist Priti Bindu Chakma said the directive of the Armed Forces Division of the Prime Minister’s Office was against the public interest, racist and hateful to the Jumma people. He expressed outrage that the hill people had been blamed for extreme and far-reaching adverse effects on biodiversity and nature in the hilly areas, sidelining other root causes for the same.

He said it would never be desirable for any department of Prime Minister Sheikh Hasina’s office to issue such anti-development directive. Prime Minister Sheikh Hasina has to bear the responsibility of this racist attitude. Priti Bindu Chakma opined that the implementation of the directive would have a serious negative impact on the livelihoods of the helpless poor indigenous hill people who are most of the internally displaced persons and are still awaiting rehabilitation as per the CHT Accord.

Priti Bindu Chakma, executive editor of the Hill Voice, added that traditional farming of indigenous peoples (known as Jum farming in South Asia) has never been a serious threat to biodiversity and the natural environment. That is why the Convention No. 107 of the ILO on Indigenous and Tribal Population, which was ratified by Bangladesh, recognizes traditional farming as a right of indigenous peoples.

It is worth mentioning that Iftekhar Mahmud’s column titled “Enemies of wild animals vs. small ethnic groups” published in the Prothom Alo on November 19 also said that “40 percent of the world’s forests and wild animals are protected by people of small nationalities, those are called indigenous or indigenous communities in Western countries. The people of this small ethnic groups protect environment and wildlife as part of their culture, religion and customs.”

Sajib Chakma, Assistant Information and Publicity Secretary of the Parbatya Chattagram Jana Samhati Samiti (PCJSS), said that among the state and non-state actors, the army deployed in the CHT is one of the factor destruction of forest resources and harming the biodiversity and natural balance in the country. There are more than four hundred temporary army camps on the top of the hills in the CHT. Extensive destruction of trees and cutting of jungles have taken place around these camps, resulting in simultaneous destruction of forest resources and accelerating land erosion in the hills. But the army did not attach any pictures of such misdeed to the directive, he mentioned.