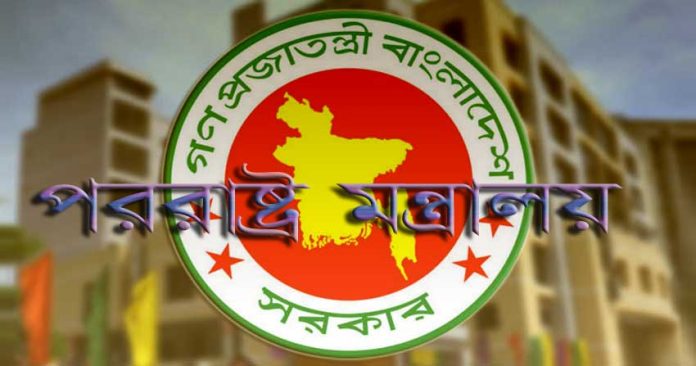 Hill Voice, 21 November 2021, Special Correspondent: During the visit of the Danish Ambassador to Dhaka, Ms. Winnie Istrup Petersen, to Rangamati and Chittagong on 24-25 October, the Foreign Ministry gave a ridiculous, conspiratorial and politically motivated advice to the two Deputy Commissioners of concerned districts.

The advice was given to the Deputy Commissioners of Rangamati and Chittagong district in a directive signed by Assistant Secretary of the Foreign Ministry Rehana Parveen on October 21. 9 suggestions have been given in the said instructions of the Foreign Ministry. Of these, the following two suggestions in sequence (g) and (h) appear to be ridiculous, conspiratorial and politically motivated. They are-

“(g) In recent times, armed members of PCJSS (Santu) from Rabetang (border of India) area of Harina Union in Barkal upazila of Rangamati district have infiltrated various places of Rangamati Sadar for the purpose of sabotage. Besides, JSS (MN Larma) and PCJSS (Santu) groups are stationed at Subalong Bazar in Barkal Upazila. In this case, it is recommended to ensure adequate police security in accordance with the specific itinerary.”

“(h) It is mentioned that the delegates mentioned in the itinerary will have a courtesy meeting with Chakma Circle Chief Barrister Devasish Roy and will have breakfast at his office. At present, Barrister Devasish Roy has been carrying out clandestine activities at national and international level demanding the establishment of an independent Jumland and recognition of the small ethnic groups as indigenous peoples. Therefore, as the matter is sensitive for the government and the country, under the policy formulated by the Government of Bangladesh, it was recommended that the delegates should have a courtesy call and breakfast at Sabarang restaurant instead of the Chakma Circle Chief’s office.”

In the directive (e), the racist attitude has been maintained that the meeting with the leaders of different local communities is very sensitive in the reality of Chittagong Hill Tracts.

Suborno Chakma, General Secretary of the Rangamati district committee of the PCJSS, said the foreign ministry’s suggestion was ridiculous and politically motivated. The then government led by Prime Minister Sheikh Hasina signed the historic CHT Accord with the PCJSS led by Santu Larma in 1997. PCJSS re-entered democratic politics in 1997 following the CHT Accord. Therefore, the question of having armed members of the PCJSS with which Sheikh Hasina’s government had made an agreement is fully irrelevant.

He further said that immediately after the signing of the CHT Accord, the Sheikh Hasina-led government did not implement the Accord properly even after holding the state power for almost four years and 13 consecutive years since 2009. This has caused great anger at home and abroad against the present government led by Sheikh Hasina. In order to cover up the government’s failure to implement the Accord, the government often propagates at home and abroad labeling the members of the PCJSS and supporters of the Accord as ‘terrorists’, ‘extortionists’, ‘armed miscreants’ and so on. Santu Larma, President of PCJSS, is now Chairman of CHT Regional Council (State Minister). Such a statement by the Foreign Ministry against a person with the status of Minister of State was not in line with diplomatic etiquette, Mr. Chakma opined.

Suborno Chakma also added that the JSS (MN Larma) known as Reformist was created under the patronage and support of the local leadership of the ruling Awami League and the army. Reformist and UPDF armed members have been deployed by the army and the Awami League in various places including Subalong, Tintila of Longadu, Babuchara of Dighinala, Jibtali in Rangamati and Mog Party terrorists in Powaitu Para in Rajasthali. Under the direction of the army and the Awami League, they are carrying out terrorist activities like killing, abduction, ransom etc. on the common people including the members of PCJSS and the supporters of the Accord. However, under the shelter of the army and the government, those armed terrorist groups including the JSS (MN Larma) are carrying out terrorist activities, but by displaying those armed terrorists, foreign diplomats are being intimidated, he said.

Supriya Chakma, assistant editor of the Hill Voice, said that the allegations of secret activities against Barrister Devasish Roy regarding establishment of an independent Jumland and recognition of small ethnic groups as indigenous peoples at the national and international levels were nothing but conspiratorial. He has been openly raising the demand for recognition of peoples concerned as indigenous peoples. The demand for recognition as indigenous peoples is a democratic right. He has been democratically demanding that. On the other hand, he never raises demand for establishment of an independent Jumland anywhere. It is nothing more than a politically motivated and fabricated allegation. Such untrue, fabricated and conspiratorial statements can never be expected from an important ministry like the Foreign Ministry. Giving such irresponsible opinions against the eminent personalities of the country would question the image of the ministry and the country in the international arena, said Mr. Chakma.