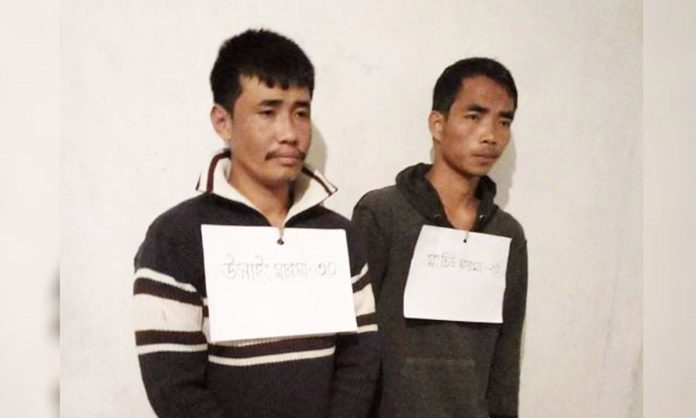 Hill Voice, 19 November 2021, Rangamati: It has been alleged that two Jumma villagers were arrested from Bangalhalia Jouta Khamar area of Bangalhalia union in Rajsthali upazila of Rangamati district and handed over to the police.

At around 2:00 pm on Wednesday (November 17), a group of amy led by Hafiz Faisal, warrant officer at the Bangalhaliya army camp, arrested the two Jummas from their homes and took them to the camp. Later, the army handed over to the Chandraghona police station putting arm with them.

According to local sources, the detainees were once associated with an army-backed Mog party. At that time, in patronization of the army, they used to carry out extortion, kidnapping and harassment on the villagers in the localities.

After leaving the Mog Party, they used to carry out unruly activities in the area. He used to drink drugs and steal various things including chickens from the neighbors. Even if the elders of the society forbade them, they would not care about anyone.

8/9 months ago, the in-charge SI of Bangalhalia police outpost under Chandraghona police station arrested the said persons and took them to Rangamati court for getting drunk and quarreling with others in Bangalhalia Bazar. After three months in jail, they were released on bail.

Even after being released on bail, they did not stop their misdeeds. As a result, some villagers including Karbari (head of the neighborhood) Mongsuiu Marma, put a complaint against them at the army camp, and on the basis of that allegation, the villagers were reportedly detained.

Although the detainees were not involved in any activities of the Parbatya Chattagram Jana Samhati Samiti (PCJSS), the army and the local Awami League leadership campaigned for political gain, alleging that the detainees were ‘terrorists’ of the PCJSS.

A villager, who did not want to be named, said that the army had spread false propaganda that weapons were recovered from the detainees to show that PCJSS was involved in terrorist activities.

In this case, Although Dr. Renin Soye did not blame anyone, by quoting Dr. Renin Soye’s statement, the army propagated that PCJSS terrorists could have carried out the attack. However, a neighbor who did not want to be named confirmed that Renin Soye had not spoken to anyone about the matter.