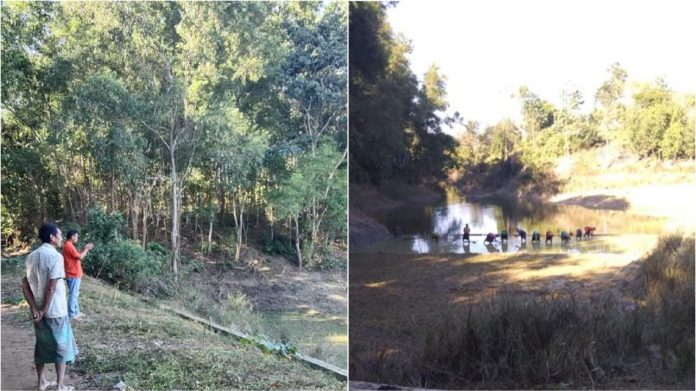 Hill Voice, 17 January 2022, Rangamati: An indigenous villager was allegedly prevented from cultivating his own land by an outsider Muslim settler in collaboration with the army-BGB at Perachara village in Sarboatli of Baghaichari upazila of Rangamati district.

The real owner of the land is Columbus Chakma (35), son of Satyaban Chakma (55), No. 7 Naba Perachara of Sarboatuli Union under Baghaichhari Upazila. Columbus Chakma has been cultivating the land for more than two decades.

Yesterday, January 17, 2022, the outsider Muslim settler Md. Belal Hossain (30), son of Md. Kashem of Amtali villager of Amtali Union under Baghaichari, claimed that the land belonged to him and forcibly prevented Columbus Chakma from cultivating it.

It may be mentioned that Churakhali BGP Camp Commander Subedar (new posting) Ananda Mohan under Rajanagar 37 BGP Battalion yesterday threatened land owner Columbus Chakma that “if you take away the land, what can you do for my job?”

It is learnt that the settlers including the army-BGB have been carrying out various conspiracies and activities since last year to occupy this land.

As a result, Columbus Chakma, the real owner of the land, has been living in fear of losing the land he has been cultivating for two centuries, and tensions are reported in the area.