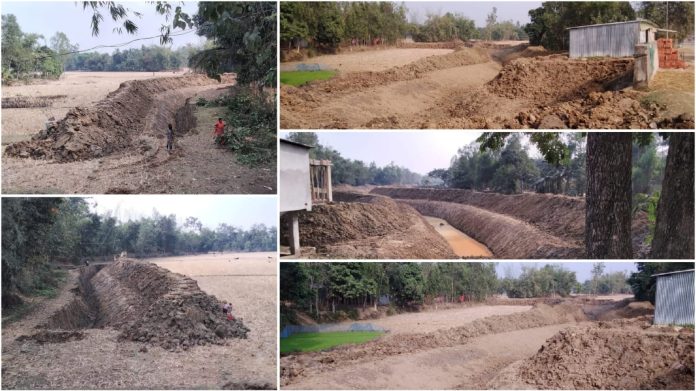 Hill Voice, 15 January 2022, Sherpur: It has been alleged that a canal is being dug in Nalitabari upazila of Sherpur district by occupying the lands of indigenous Garo and local Bengali villagers with about 20 acres of land belonging to 15 Garo tribal families.

According to local sources, in the village of Tarini and Kalakuma on the banks of Bhogai River in Ramchandramura Mandliapara Union of Nalitabari in Sherpur district bordering Garo Hills, without any discussion with the indigenous peoples, forcibly occupying agricultural land with CS record of indigenous Garo people.

The petition states that excavation work has started from Kalakuma Boishali Bazar to the banks of Bhogai river north of Tarani village. There was no canal in that place before. In fact, the canal is being dug on the record land of the indigenous villagers as there is no khas land in that village for digging the canal. Excavation of these canals will cause severe damage to their cultivable lands and settlements and will reduce the fertility of the land.

The petition further states that the indigenous people of the area are extremely poor and own very little amount of land. They will suffer irreparable loss as their land is used for canal digging. Moreover, the canal has no need in their area and homesteads are being destroyed by dumping the soil of the canal. On the other hand, it is mentioned in the application that as a result of excavation of canal along settlement, the homesteads land will be broken by the flow of water and will fall into the canal.

The petition alleges that the contractor’s people threatened the indigenous villagers in various ways while the contractor was prevented from digging the canal till the settlement. In this case, it is mentioned in the application for taking necessary measures to protect the minimum crop land and homestead lands.