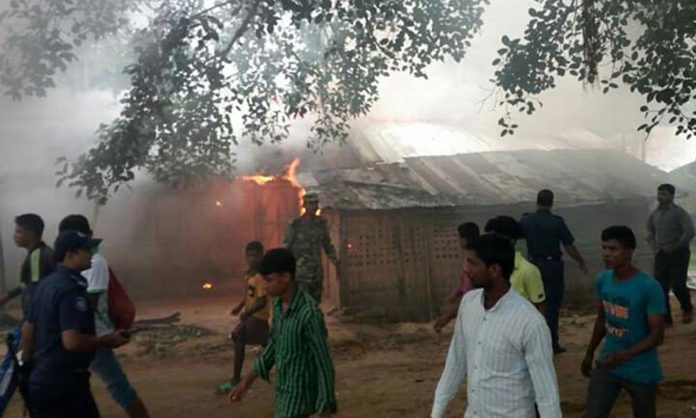 But the question arises: where the conflicts and violence in the hills have ended through the CHT Accord, why this kind of conflict and violence appear again? What is the reason behind this? Who is responsible? From the state authorities, it is often claimed that the Jana Samhati Samiti, one of the signatories of CHT Accord, is responsible for this violent situation. But in reality, how true is that complaint? Or does it exist deep conspiracy and underlying reasons behind this situation? How much is responsible for such circumstances not being implemented properly and full of the CHT Accord that was signed aiming at resolving the crisis politically and peacefully? Or the government is responsible for the prevailing situation in the country?

In fact, as it has been earlier, at present, anti-humanity drive is being conducted upon the Jumma people by making arbitrary arrests, searching operations, carrying out extra-judicial killings, waking up the innocent villagers at wee hours and beating them up and handing them over to police after entangling in false cases. Even after the Accord, the Jumma people have not yet been spared from atrocities of the state force. Rather, the gravity of suppression and oppression is increasingly taking ugly shape with the passage of days. Land-dispute-centric conflicts between the hill people and Bengali settlers or under indulgence of the state machineries, organized communal attacks upon the Jumma people are taking place every now and then. Even after the Accord, the Jumma people are being ceaselessly evicted from their lands. The post-Accord era has witnessed eviction of 30 Jumma villages. Continuous illegal occupation of lands and homesteads from the Jumma people is being perpetrated by both the state and non-state authorities. Even after signing the Accord, violence upon the women has not declined at all. Violence upon the hill women has got escalated as weapon of illegal land occupation and ethnic cleansing.

The ultra-communal and ultra-national forces including the settlers and fundamentalist groups are being incited against the Jumma people and CHT Accord. In 2019, a single organization named: ‘Parbatya Chattagram Nagorik Parishad’ was gotten organized while having dissolved all the organizations of settlers, ultra-nationalists and ultra-communal groups. As soon as getting formed, the CHT Land Commission meetings held in Rangamati and Bandarban in December 2019 and in February 2020 respectively were encircled under initiative of this organization. All those communal attacks of fanatic groups were perpetrated under patronization of the state authority with a view to illegally occupying the lands of the Jumma people and evict them from their ancestral lands. As to this day, the perpetrators responsible for even single event of those brutal attacks have been brought to trial and jurisdiction of exemplary punishment.

It is clear to everyone that the implementation process of the Accord is being obstructed by creating stooge elements from among the Jumma people. An anarchism has been created through allowing conflicts, fighting, killing, kidnapping, realizing ransom, etc. terrorist activities by sheltering and indulging the Anti-Accord elements and fundamentalist groups including the UPDF, JSS (M N Larma) known as Reformists, UPDF (Democratic) and Mog Party of local origin. On the one hand, such armed groups are being provoked in conflict and violence by providing shelter and patronization in hills,and on the other hand, if the shelter claims that due to conflict and violence, it is hampered to implement the CHT Accord, then what the matter is standing does not need to explain it.

Needless to say that in consequence to non-implementation of the Accord for the years together, discontent and dissatisfaction have been created among the Jumma people. In this case, if there appear conflicts and fighting, then it is nothing else but the non-implementation of the Accord can be held responsible for such situation. On the other hand, let some specific quarter of certain community, get involved in whatever conflicts and violence for the vested interest, but there cannot be any question of creation of obstruction in ensuring rights, returning lands, acceding to right to self-determination and giving employment, in accordance with the Accord. Such argument can be regarded as nothing but a plea to evade implementation of the Accord.

Needless to be mentioned, the CHT Accord was signed in 1997 between the government and PCJSS vowing to resolve the CHT crisis by political and peaceful means. To that end, the provisions that were brought in the Accord include: preservation of tribal-inhabited feature of CHT; introduction of Special Administrative System comprising of Regional Council and three Hill District Councils and devolvement of political, administrative and economic powers including general administration, law & order, police, land & land management, forest & environment, tourism, development of communication system, etc. to these councils; preparation of voter list with the permanent residents to hold elections in the councils; withdrawal of all temporary camps including the military rule named: ‘Operation Uttoron’; resolution of land disputes through Land Commission; rehabilitation of India-returnee refugees and internally displaced Jumma persons in their respective lands properly having returned their respective lands to the owners; cancellation of leases of lands given to the non-residents; appointment of the permanent residents in all jobs available in CHT prioritizing the Jumma people; bringing amendment to all laws and regulations existent and applicable to CHT in consonance with the Accord; and over all, rehabilitation of the settler Bengali people outside CHT with dignity, etc.

But it is fact that none of these issues of the Accord has been properly and fully implemented so far. It is due to these core issues of the Accord for not having properly implemented, the political and peaceful solution to the CHT crisis has not been attained. Same is the case with proper establishment of the Special Administrative System incorporating the CHT Regional Council and three Hill District Councils. In place of devolving the authority of political and administrative functions to the Regional Council and Hill District Councils, such as, general administration, law & order, police, land & land management, forest & environment, tourism, development of communication system, etc., as it used to be earlier, are being directed by the district and upazila level bureaucrats including the deputy commissioners, police supers and state special forces. Administration of this kind has been set upon the Jumma people like a heavy stone.

Needless to say, if certain national community is given commitment assuring of: giving right to self-government; returning of land right and the lands illegally occupied; establishing public-represented democratic governance through demilitarization; introducing self-determined development genre to determine our own development; proper rehabilitation of refugees and the displaced persons in their respective lands; rehabilitation of political migrants (settlers) outside CHT with dignity and so on, and if the commitment so assured is not respected, as such, it is quite natural that certainly, there will appear anger, discontentment and despair among the very ethnic groups who have been bluffed and betrayed so brazenly.

The Accord-signatory government, which was in power for nearly 4 years following signing of the Accord and later on, it is the same government, which even though being in the state power for 13 years at a stretch, does not march forward in implementing the Accord; naturally, non-confidence and distrust will certainly crop up among the victimized community people. It is the PCJSS as well Jumma people who have been waiting for 24 years in the hope for implementation of the Accord, but let alone implementation of the Accord or paying respect to the commitment given to that people; in addition, if the Accord-signatory government resort to one after another conspiring designs counter-productive to the Accord and interest of the Jumma people, as such, the suffering community will, for sure, compel to switch over to different thought.

Instead of solving the CHT crisis through implementation of the Accord by political and peaceful means, if following the policy of fore-gone dictatorial rulers, adapts the policy to resolve the crisis through fascist suppression and oppression, it is for certain, the resistance spirit will get grown in that community people. Because, where there prevail oppression and suppression, inevitably, there springs up resistance. This is inherent nature of mankind. When there remains no space to step back, any individual or ethnic group gets obliged to go for defensive resistance. Even though waging the movement demanding for implementation of the Accord through democratic means during the last two decades; if the ruling quarter does not count the democratic movement at all; and rather opt for fascist suppression and oppression policy, as such, very rationally, it is none else but the quarter in the power shall be held responsible for the conflicting and delicate situation so created as consequence.

Today, if the Accord had been properly implemented; if the permanent residents including the Jumma people of CHT had become possessor of the special administrative system through implementation of the Accord; if the Regional Council and three Hill District Councils had been in a position to control all the entrusted subjects including general administration, law & order, police, land & land management, forest & environment and tourism etc. through implementation of the Accord; if the dispossessed lands and villages had been returned to the owners; if the displaced people had been rehabilitated in their respective lands and homesteads; if there had been made democratic governance available through withdrawal of military rule and all the temporary camps; if the permanent residents of CHT had been appointed in all jobs available in CHT with priority given to the hill people; If the settlers had been removed from the lands belonged to the Jumma people and honorably relocated them outside CHT; as such, it can be said for a certain that the anger, dissatisfaction and despair would have never appeared among the Jumma people; and as such, they would have never given the thought for defensive resistance that might involve bloody conflict. The Jumma people as the suffering peoples, if their hope for the rights as envisaged in the Accord had only been met, as such, they would have become too contented to be expressed and it can safely be said that the existing fragile situation would have never created in CHT.