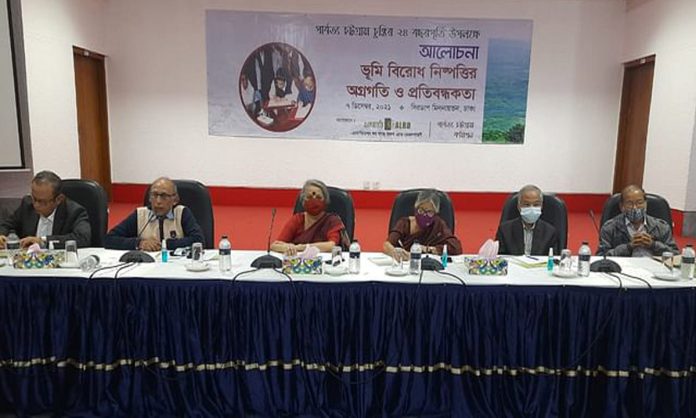 Hill Voice, 8 December 2021, Special Correspondent: Due to the lack of sincerity of the government, the Chittagong Hill Tracts (CHT) Accord is not being fully implemented. A section inside the government is obstructing the implementation of the CHT Accord. Attempts are also being made to deny the civil rights given to the indigenous hillmen in the Accord.

In his keynote paper, Goutam Dewan demanded constitutional recognition of the CHT Regional Council Act and the three Hill District Council Acts for the implementation of the CHT Accord. He also demanded immediate elections to the three Hill District Councils and Regional Council for the purpose of establishing representative local bodies and amendment of all the laws applicable in the CHT.

Mr. Dewan further said that instead of resolving the land problem in the CHT, new land issues are being created in the hills in the name of continuous development and tourism. At present thousands of Jum lands are being leased to the outsiders for tourism and commercial purposes in the hills. He demanded the full implementation of the CHT Accord immediately.

Former Member of Parliament and Vice President of the Parbatya Chattagam Jana Samhati Samiti (PCJSS), Ushatan Talukder, has said that the CHT Accord is not being fully implemented due to lack of sincerity of the government. He said, ‘The government or those who think, the indigenous hillmen are now divided into different groups. They have become weak. No need to worry about them. So, they can be evicted from there.’ However, he warned saying that “The government would be wrong to think so. Jumma people want rights. They know how to fight in the face of adversity.”

As chair of the event, Sultana Kamal, a human rights activist and co-chairperson of the CHT Commission, said, “The purpose of the CHT Accord was to establish lasting peace there. But we have moved far away from that place. In the current situation in the CHT region, we do not see any hint of peace. The demography has changed there. Various complications have been created. Partisanship and biased administration are prevailing there. As a result, the possibility of implementing the CHT Accord is becoming increasingly difficult.

Sultana Kamal commented that although the Awami League government signed the Accord in 1997, now they are reluctant to implement the agreement. She said, “Many of us are of the opinion that the Prime Minister is not clarifying his actions on the basis of misinformation. We hope that she will disprove our assumptions, just as she had shown interest in signing the CHT Accord, will also clarify his steps in implementing the agreement.”

Khushi Kabir, a member of the CHT Commission and coordinator of the non-governmental organization Nijera Kori, said the CHT Accord was signed 24 years ago. At that time the PCJSS had made this agreement with the state. But the governance system, land system and civil rights mentioned in the agreement were not implemented. In particular, there was no solution to the land problem. At present the indigenous hillmen are being evicted from their ancestral lands in the name of tourism in the hills which is tantamount to deliberately violating the CHT Accord. She said the CHT region has become profitable for some people. Tourism resorts are being set up there. But statistics from across the country show that poverty is much higher in the hills than the national one.

Executive Director of ALRD Shamsul Huda said, “Although Bangladesh has achieved a lot in the 50 years of independence, but peace has not been established in the last 50 years in the CHT. One of the purposes of the Accord is to resolve the land issue. But sad, it is the fact that the Land Commission is currently an obstacle in the implementation of the agreement. Because the Commission has no fund, no manpower, even its Rules has not been formulated yet. Although the contradictory provisions of CHT Land Dispute Resolution Commission Act 2001 were amended in 2016 for the purpose of resolving land disputes in the hills, the Rules of the Commission was not enacted even in that year. Although many laws or rules have been enacted in a very short time, the Rules of the CHT Land Commission has not been approved in the last 6 years. She further said that there are some quarters within the government who are obstructing the implementation of the agreement. She sought the intervention of the Prime Minister in this regard.

Nirupa Dewan, a former member of the National Human Rights Commission, said, “We are constantly facing military rule in the hills. Freedom of speech and freedom of movement are being interfered with. The hill people are not given a chance to talk to those who are interested in cooperating in the implementation of the Accord. On the contrary, attempts are being made to establish the security forces in the hills under the pretext of security, separatism and so on.

Professor Mong Sanoo Chowdhury, a member of the CHT Citizens’ Committee, said, Today, those who have signed the Accord and are demanding the implementation of the agreement are being called separatists. We don’t want any more bloodshed in CHT. The multi-dimensional problem of CHT needs to be solved immediately through implementation of the Accord.

Lelung Khumi, a development worker, said: ‘As land acquisition and occupation in the hills continues in the name of tourism expansion and development, we are constantly living in fear of eviction from the land. All in all, a culture of fear is remained active in the hills. The crisis needs to be resolved politically. For this, the intervention of the Prime Minister is very necessary.

General Secretary of CHT Jumma Refugee Welfare Association Santoshita Chakma Bakul, who is an India-returnee, called for the return of homesteads and land to the India-returnee Jumma refugees and internally displaced persons.