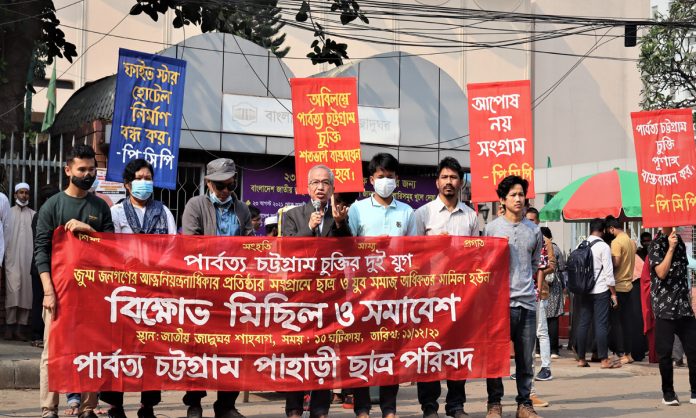 Hill Voice, 11 December 2021, Dhaka: On the occasion of the completion of two eras of the Chittagong Hill Tracts Agreement, a protest procession and assembly has been organized on the initiative of Pahari Chhatra Parishad demanding immediate implementation of the agreement.

In her welcome speech, Babilon Chakma, Central Co-Organizing Secretary of Pahari Chhatra Parishad, said that two eras of signing the Hill Tracts Agreement are passing today. The main purpose of the agreement was to establish the rights of the oppressed indugenous people and to resolve the hill problems peacefully. But despite having this written document of the agreement, the government is still making excuses in various means. If the agreement is not implemented, the government will have to take responsibility for all the unwanted situation in the hill in the future.

Claiming that the non-implementation of the agreement was a fraud, Ushatan Talukder, vice-president of Jana Sanghati Samiti and former MP, said that the present government has been in power for many years. And today is the twenty-fourth year of the agreement.

Is it less time? The government agreed that the hill problem was not just a regional problem but a national one. And that is why the people of the whole country have to think about this problem. “We have gained freedom in exchange for the sacrifices of three million martyrs and two million mothers and sisters,” he added. But even after the agreement, how can a region of the country (hilly region) remain oppressed and neglected? He also questioned why there would be propaganda about the agreement. Bangladesh is moving forward , will move forward. But why the Chittagong Hill Tracts has been kept in such a state of garbage?

The government says we (the hill people) are divided. we have become weak. But this former MP wants to know who creating this division and faction from whose money and from whose pocket. The Hill Tracts Agreement is not just an agreement signed by Santu Larma and Abul Hasnat Abdullah, it is aimed at resolving the hill issue. Therefore, the leader of Jana Sanghati Samiti also demanded the full implementation of the Hill Accords immediately to solve the problem of the hills.

At the rally, Dhaka University Professor Robayet Ferdous said the Bengalis have been the victims of ethnic and linguistic persecution in Pakistan for 24 years; the Bengalis are now persecuting the indigenous peole in the Chittagong Hill Tracts. What is going on in the mountains is desolate military rule.

But the tribals have not got that electricity yet. Today, one lakh Chakmas have been deported and live in Arunachal Pradesh, India. Therefore, this teacher demanded immediate implementation of the Hill Accords to solve the hill problems. Speaking on the occasion, Jana Sanghati Samiti staff member and women leader Chanchana Chakma said that the Hill Accords had been signed but there is no sign of implementation of the agreement till date. Military rule has been going on in the Chittagong Hill Tracts for almost 52 years.

This military rule has continued from the time of Pakistan till today. On the other hand, the constitution has made the hill people Bengalis. The woman leader also claimed that the indigenous people were being wiped out through various deceptions and oppressions. Meanwhile, Nippon Tripura, central general secretary of Pahari Chhatra Parishad, said the agreement was signed for development, peace and harmony in the Chittagong Hill Tracts.

Instead, the Parbatya Nagarik Parishad, an organization of rehabilitated settler Bengalis, is being patronized in various ways and various groups are being formed with the help of a group isolated from the Jumma people. The student leader also warned that the student community in the hills would not hesitate to decide what to do if these were not stopped Meanwhile, Reng Young Mro, president of the gathering and central information dissemination and publication secretary of Pahari Chhatra Parishad, said in his speech, “We have seen the best examples of fraud and deception in the last two decades.”

The student leader also alleged that the law and order situation was deteriorating due to those who went to the hills in the name of maintaining law and order. He also demanded immediate implementation of the Hill Tracts.