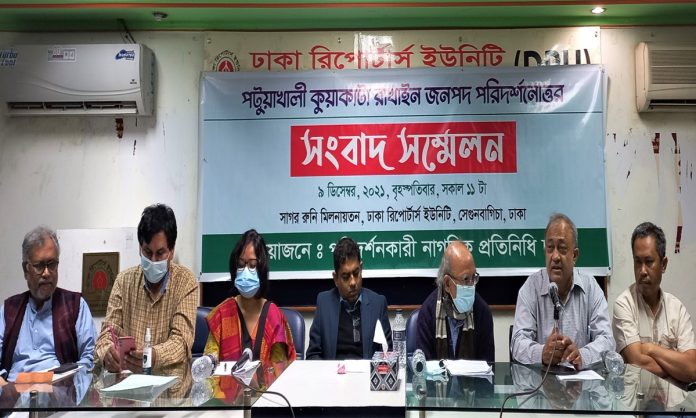 Hill Voice, 9 December 2021, Special Correspondent: Indigenous Rakhine must have land rights protected. The restoration and return of forcibly occupied lands, places of worship and cremation ground of Rakhine people have to be ensured. Not only becoming minority, the Rakhine people of Patuakhali are going to be totally evicted. A delegation of on-the-spot investigators made the demands at a press conference on Thursday (December 9).

A 14-member civic rights delegation visited several area of Rakhine villages from November 26 to 28, 2021 to observe the deprivation and crisis of the Rakhine people living in Patuakhali district. Members of the citizen delegation visited several villages in Kalapara upazila of Patuakhali and talked to members of local Rakhine families and others. The villages visied bt the delegation include Choyanipara and Choyapara of Tiakhali Union, Tulatalipara and Madhupara of Mithaganj Union, Keranipara of Kuakata Municipal Area and Misripara of Latachapli Union. A press conference was organised on Thursday to share the experience of the delegation.

In a written statement, Rebayet Ferdous said, “Indigenous people all over the country are living in various forms of exploitation, deprivation, land grabbing and fear. We know this, but the situation of Rakhine people in Patuakhali region is miserable. The Rakhine first dug a well (Kua) in the area, hence the place had been named as Kuakata. Most Rakhines today left the country, they are in endangered; Not only are they a minority but they are also going to be outnumbered.”

He added that where millions of Rakhine people lived a few decades ago, their number has now dropped to just two and a half thousand. In 1948, there were 144 Rakhine villages in Patuakhali and 93 in Barguna district. The last Rakhine village to be wiped out this year is Choyani Para. The Rakhine village has become extinct due to acquisition for Payra Port.

Claiming that all the festivals of the indigenous Rakhine people were land-centric, he added that the Rakhine were leaving their lands and moving elsewhere as their lands, ponds and crematoriums were being occupied. They are constantly losing their land due to land grabbing through fraud, politically influential and self-interested brokers and the inactivity of the state apparatus. If the process of evicting Rakhine from their land continues, the existence of Rakhine in the region will be wiped out. We want a Rakhine village not to be wiped out. He also demanded that the evicted Rakhine families be rehabilitated in a place that is appropriate to their lifestyle and culture.

At the press conference, Zakir Hossain, executive director of the Nagarik Udyog, said, “If you don’t go there, you don’t understand how terrible the situation is. How many festivals are being celebrated there on the golden jubilee of independence. But today the indigenous Rakhine people are being wiped out. The pond is being stolen there during the day and at noon. Installations have been made by obstructing the way to the Buddhist temple. The theme of SDG is that no one can be left behind. But we are doing everything leaving them (indigenous people) behind. This is happening at the tip of the nose of administration so the administration cannot avoid this responsibility either. He shared his experience that a shop was built by occupying land with paper typed in a street shop. He also called on the journalists to report on the incident.

Human rights activist Nur Khan Liton said that If you look into, you will see that the lands of the indigenous peoples and minorities who were there after independence are now occupied. Their properties have been looted and women have been abused. They can’t talk, they do not have rights to talk about their rights. A commission is needed to look into this. At different times, different groups have occupied the lands of the indigenous people and minorities and oppressed them. This human rights activist also thinks that if democracy was strong then these tortures and oppressions would be reduced in many cases.

Speaking in the press meet, Executive Director of ALRD Shamsul Huda said, “The actual situation may not be described in writing. We are celebrating the golden jubilee of independence. We have won the independence. But we have a lot of shame despite the victory. In reality Bangladesh is a land of plunder. Many lands have been occupied under the patranization of administrations. On the one hand, the corruption of the land administration, with their help many people are occupying the land by making fake papers. Factories for making fake documents have been set up in all the district level administration of Bangladesh. He also alleged that a group in the administration was helping the land plunders.

He also claimed that the Rakhine people are such an integral part of everything including civilization, agriculture and economy of the greater Barisal region. If the Rakhine people cannot be saved, the blood of the freedom fighters of 1971 will be betrayed. We have moved far away from the aspirations of the liberation war. Now is the time to bring everyone back to the front. But those who are behind are being pushed further back.