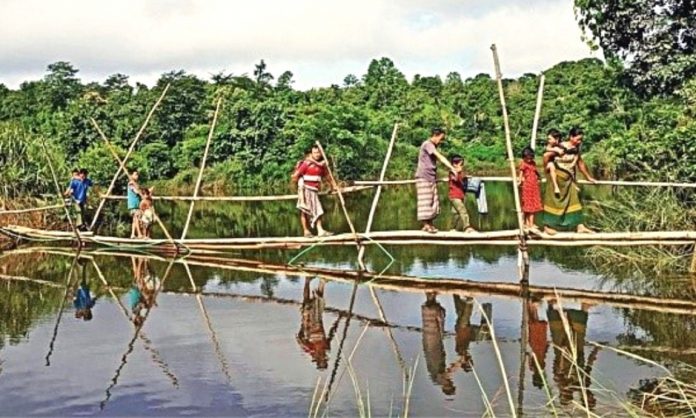 Hill Voice, 18 September 2019, Rangamati:  Thousands of people of five villages in Barkal upazila of the district are suffering immensely for years for want of a permanent bridge over a canal.

As a makeshift arrangement, villagers make a bamboo bridge over the canal at Uttar Bhushon Chara in the upazila every year.

Locals said the 120-foot-long bridge is damaged due to the overflowing stream during the rainy season every year, causing immense sufferings to its users.

People of 250 families use the shaky bamboo bridge amid risk of accident every day, said the villagers, adding that especially school children are the worst suffers.

During a recent visit to the area, this correspondent found villagers using the 120-foot-long bridge to go to their destinations, including different educational institutions and markets.

Nilo Kumar Chakma, a resident of Uttar Bhushon Chara village, said they face trouble while crossing the bridge, especially during the rainy season.

Every year a number of villagers sustained injuries after falling down from the bamboo bridge, he said.

Rozina Chakma, a student of Uttor Vushanchhara Primary School, said she had to attend her school, which is about five to six kilometer from the home, using the bridge every day.

He suffering doubles during every rainy season, he said.

Vushanchhara Union Parishad (UP) Chairman Muhammad Mamunur Rashid said he heard about the matter and will submit a letter to the higher authorities in this regard soon.