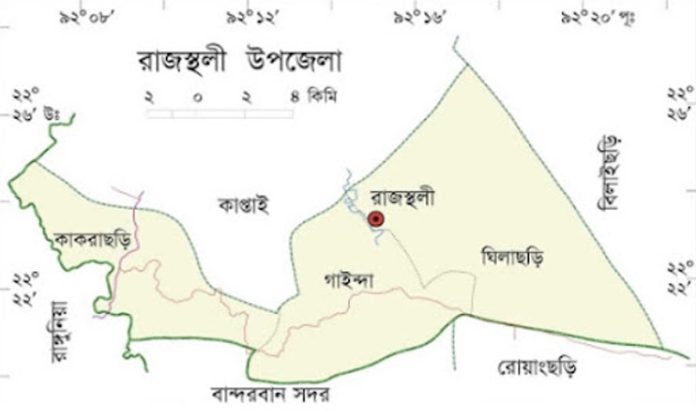 Hill Voice, 25 October 2021, Rangamati: It has been reported that the two chairman candidates captured by the army and the Mog Party have been handed over to the police in Rajasthali of Rangamati.

It may be mentioned that two independent chairman candidates of Ghilachari Union and Gaindya Union under Rajasthali Upazila, Ujjwal Tanchangya (38) and Kalamong Marma (40) respectively were picked up from their homes by the army and Mog Party between 12 noon and 2 pm last night (October 25).

After being picked up, they were reportedly kept in Rajasthali army camp. There they were brutally beaten by the army.

According to local sources, the army tried to hand over Ujjwal Tanchangya and Kalamong Marma to the police on Monday morning. But as a result of inhuman beatings by the army, their physical condition was very weak. As a result, the police did not accept them.

The army then took the victims to the hospital for treatment. After the treatment, the army handed over the chairman candidates to the Rajasthali police station at around 10 am.

It is learnt that Ujjwal Tanchanga, an independent chairman candidate of Ghilachari Union, has been entangled in a case filed in connection with the murder of Md. Jalal Uddin Ripon, a fish trader in Rajsthali Bazar Para which was taken in October 2020. Ujjwal Tanchangya was implicated in the case as an unknown person.

An elder of the village, who did not want to be named, said that opposition candidate Ujjwal Tanchangya was jailed on false charges in order to win vice president of the Awami League’s Rajasthali Upazila Committee and chairman candidate of the Awami League in No. 1 Ghilachari Union, Robert Tripura, for the chairmanship in the forthcoming Union Parishad elections.

On the other hand, Kalamong Marma has been implicated in the murder case of army soldier Md. Nasim. On 16 August 2019, Md. Nasim, an army soldier, was killed in an armed attack by the Mog Party.

The elder also said that Kalamong Marma is preparing to contest for the post of chairman of No. 2 Gaindya Union in the upcoming Union Parishad elections. In this situation, the rebel candidate Kalamong Marma has also been picked up and sent to jail implicating in a false case to win over the Awami League chairman candidate of the union, Puchimong Marma.