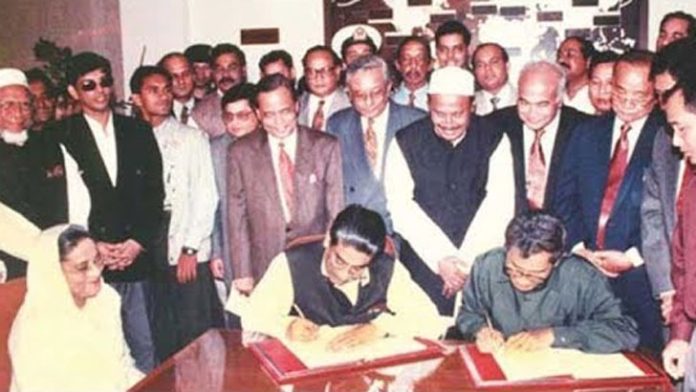 Hill Voice, 01 December 2021, Special Correspondent: Tomorrow, 2 December is the 24th anniversar yof the Chittagong Hill Tracts (CHT) Accord. This agreement was signed between the Government of Bangladesh and the Parbatya Chattagram Jana Samhati Samiti (PCJSS) 24 years ago on 2 December 1997 with the aim of resolving CHT problem through political and peaceful means.

As a result of the signing of this agreement, the democratic, non-communal and progressive forces of the country including the Jumma people hoped that this time there would be a lasting political solution to the CHT problem. The persecution, exploitation, neglect and deprivation of the Jumma people for centuries is going to an end. And the Jumma people are going to get their lost rights to self-government.

But as the days go by after the Accord is signed, that hope turns to dust. Far from being a political solution to the CHT problem and from regaining Jumma’s lost rights to self-government, the Jumma people continue to be subjected to more and more oppression and exploitation.

Amid contradictory statements and skepticism of these two parties, the Government and the PCJSS, the government side is going to celebrate the 24th anniversary of the Accord with great enthusiasm and rejoicing this time too. On the contrary, PCJSS has also taken various programs on the occasion of the day through anger, dissatisfaction and frustration.

On the occasion of the 24th anniversary of the Accord, the PCJSS has published reports and leaflets on the implementation of the CHT Accord, supplements in the national daily, posters, etc. Besides, PCJSS and various organizations have undertaken the following programs: