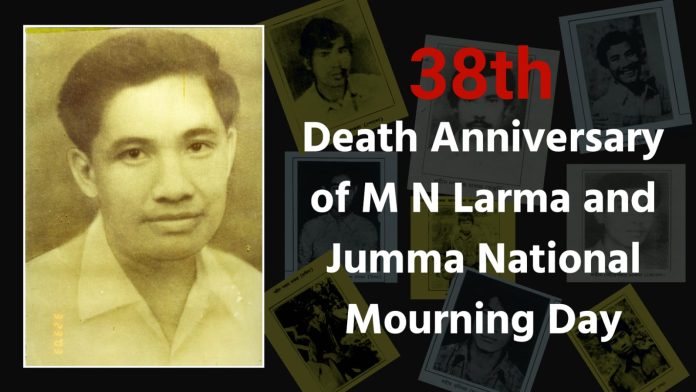 Today is the 10th day of November 2021. This day is the 38th Death Anniversary of Manabendra Narayan Larma (M N Larma), the pioneer of Jumma national awakening, founder of Parbatya Chattagram Jana Samhati Samiti (PCJSS) and also former Member of Parliament of Bangladesh and also the National Mourning Day of the Jumma people. The day bears the mark of being a day of deep sadness and significance to the bereaved indigenous Jumma peoples of the Chittagong Hill Tracts (CHT) and above all, to all the oppressed people of the country and nations of the world.

On this day in 1983, Manbendra Narayan Larma, the great revolutionary leader and the beloved frontrunner of the Jumma peoples, embraced martyrdom at bullet-hitting along with 8 co-fighters at the wee hours during a treacherous armed attack perpetrated by the ‘Giri-Prakash-Deben-Palash’ clique – an opportunist, ambitious and power-hunger gang hiding in the party.

Having initiated with the spirit of freedom and progressive Jumma Nationalism, he united the Jumma people right at the point when the national existence and entity of birth land of the multi-lingual Jumma nation of CHT were heading towards the ultimate extinction in the face of brutal and barbaric exploitation and suppression of the foreign rulers that appeared one after another. It was under his wise and dynamic leadership, PCJSS, for the first time and the sole revolutionary political party was established.

Alongside the Jumma peoples, M N Larma fought an uncompromising fight for interest of the peasants, wage earners, workers, fishermen, ferry-boat-men and neglected and deprived people of the society both inside and outside the national parliament of Bangladesh. He was a strong advocate of women’s rights. So, in true sense of the term, he was a humanist and a great leader.

Today, he is no more amidst us. But his revolutionary spirit and thought and the paradigms of his work to be followed are our invaluable asset today; and will continue to be the source of inspiration along the path of revolutionary struggle of the freedom-loving oppressed peoples of the world including the Jumma peoples.

Hundreds of party workers and heroes sacrificed their precious lives in the armed struggle lasted for two and a half decades while facing instant adversity under leadership of the PCJSS. Alongside the armed movement, thousands of freedom-loving people bravely hugged the martyrdom by participating in the organized democratic movement. After signing of the CHT Accord between the government and the PCJSS in 1997, many revolutionaries and rights activists were brutally killed in the attacks by the armed terrorist groups backed by the army and the ruling class. Today, on this great day of national mourning, the Hill Voice remembered the invaluable contribution and immortal self-sacrifice of the great heroic martyrs including the great leader M N Larma with deep respect.

The CHT Accord was signed in 1997 with an aim at resolving the CHT crisis through political and peaceful means – a result of the Jumma people’s movement for self-determination, organized by M N Larma. Following signing of the Accord, although some sections of the CHT Accord have been implemented, yet two-thirds of the sections have been left unimplemented as to this day.

The present Hasina-led Awami League government, the state power, which signed the CHT Accord together with the PCJSS in 1997, as though being in the power for more than a decade since 2009, unfortunately, has not come forward to implement the spinal provisions of the Accord. Consequently, the crisis is getting more and more complicated, let alone attaining the desired solution during the last 24 years.

The present Hasina-led government has intensified propaganda and conspiring activities to criminalize the individuals and organizations including the PCJSS members and supporters who are vocal in demanding the implementation of the CHT Accord, as ‘terrorists’, ‘extortionists’ and ‘armed miscreants’. Anti-humanitarian activities, including military raids, searching houses, arbitrary arrests, extra-judicial killings in the name of crossfire, and filing of fabricated cases, etc. anti-humanity programs have been intensified in every corner of the CHT region.

In such a situation, there is no alternative but to carry forward the ongoing greater movement of the Jumma peoples at irresistible manner imbibing with the revolutionary ideology and zeal set forth by the great leader M N Larma. The blood of the great revolutionary M N Larma and hundreds of great martyrs cannot go in vain. That the just movement of the freedom-loving Jumma people will yield in victory – for a certain.