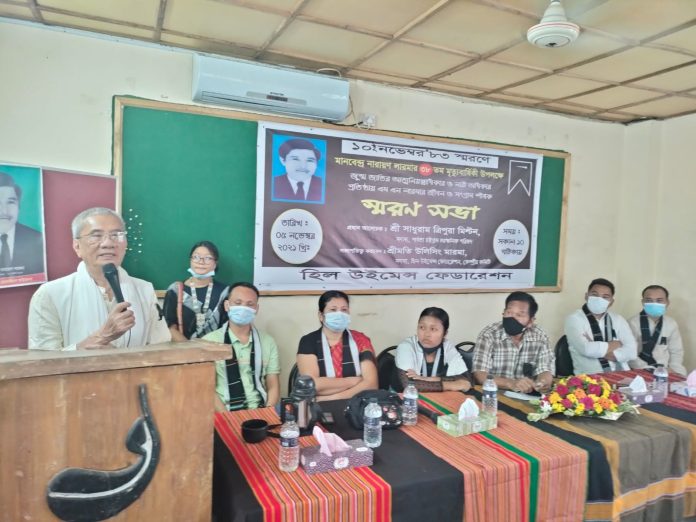 Hill Voice, 5 November 2021, Rangamati: Students, youth and women must come forward to sustain a nation. This student-youth and women society has to take historical responsibility. This was stated by Jyotirindra Bodhipriya Larma (Santu Larma) at a memorial meeting organized by Hill Women’s Federation on the occasion of the 38th death anniversary of revolutionary leader M N Larma.

Today, Friday (November 5), on the occasion of the 38th death anniversary of revolutionary leader Manabendra Narayan Larma, a memorial meeting titled “MN Larma’s Life and Struggle for Establishment of Self-Determination and Women’s Rights of Jumma Nation” was organised by Hill Women’s Federation. Sadhuram Tripura Milton, a central member of the Parbatya Chattagram Jana Samhati Samiti (PCJSS), was present as the chief guest at the memorial discussion that was presided over by Ulising Marma and conducted by Shantidevi Tanchangya.

Jyotirindra Bodhipriya Larma, chairman of the Chittagong Hill Tracts Regional Council, said the student society had tried to organize under the leadership of M N Larma in the sixties. In the light of that role of M N Larma, the position of Jumma student-youth society should be considered. As long as a classless and democratic society is not established in the Chittagong Hill Tracts (CHT), rule and exploitation of the Jumma people will continue.

He said that today the educated society has forgotten that the youth named M N Larma had sacrificed his youth for the movement for the self-determination of the Jumma people. They are awake but practically asleep. They still do not understand where and how they are going to be eliminated and what situation they are living in.

He further said that although the CHT Accord was signed with the aim of resolving the CHT problem politically and peacefully, but the government has not shown any willingness to implement the Accord for the last 24 years. Not only that, the CHT region has been under military rule for 51 years. Even after signing of the CHT Accord, the military rule has been enforced by issuing “Operation Uttoron”. The situation in the CHT is now going back to pre-Accord conditions.

Mr. Larma further said that the Jumma Student Society of the CHT had started a movement in the seventies against the Jumma-destructive Kaptai Dam constructed by the then Government of Pakistan. Even after becoming independent Bangladesh, Jumma people are still deprived of their rights. If a nation is to survive, the student-youth and women’s society must come forward to safe the people. This student-youth and women’s society has to take historical responsibility. The movement for the implementation of the CHT Accord should be taken moving forward  to establish the self-determination and women’s rights of the Jumma people.

Sadhuram Tripura Milton said that a leader cannot be born, but a leader is formed by being equipped with the right principles and ideology. He called upon the students and youth to follow the ideology of M N Larma in establishing the self-determination and women’s rights of the Jumma people.

Recalling the struggling life of the great leader, Intumani Chakma, general secretary of the MN Larma Memorial Foundation, said the role that MN Larma has played since his student days is certainly exemplary for present student society. He said that it was important to transform the life struggle of the great leader to the people of all walks of life.

Sonarita Chakma said M N Larma has fought for the self-determination and women’s rights of the Jumma people all his life. M N Larma’s thoughts need to be captured and nurtured for the emancipation of Jumma women in the CHT region.

Milon Kusum Tanchangya said, today we are observing the mourning day of the Jumma people because the revolutionary leader M N Larma is no more with us. The movement for the implementation of the CHT Accord must be taken forward by using mourning as a force, not frustration.