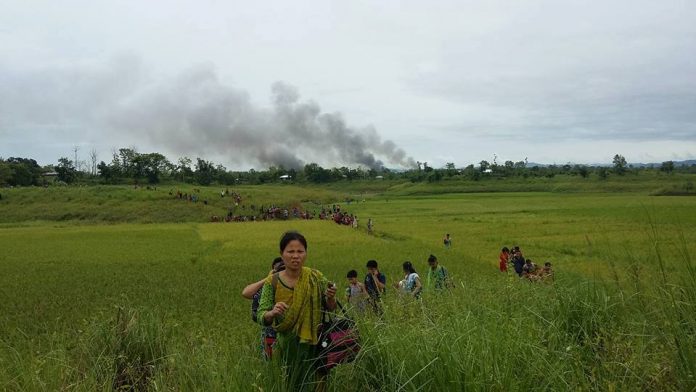 Hill Voice, 2 June 2020, Rangamati:  Today marks the third anniversary of the Longadu communal attack. This day on 2 June 2017 the Muslim settlers led by the local Awami League-Juba League perpetrated an organized attack involving arson and plundering the houses of indigenous Jumma people in Tintila of Longadu Upazila Sadar and in the adjacent Manikjorchara and Batya Para with active support of the army-police forces.

Around 250 houses were burnt to ashes during the arson attack. Of them, there were 94 houses and shops in Tintila of Longadu Sadar, 88 houses in Manikjorchara and 42 houses in Batya Para.

During the incident, one Gunemala Chakma (75) died inside a burning house for not being able to flee and three innocent Jumma villagers were also subjected to beating of Bengali settlers.

During the attack, initially the Jumma villagers tried to resist the arson-attacking Bengali settlers. But they had to march back as the army went ahead of the Bengali settlers and threatened the Jummas with consequence of shooting.

As the field became clear, the Bengali settlers went on looting and setting fire to houses and shops of the Jumma peoples with free hand. The witnesses have alleged that the army and police forces remained standing in silence and provided full security coverage to the perpetrators.

The plunderers looted valuable goods and articles including cattle and other livestock while leaving the pigs dead. None of the 250 families of Tintila, Manikjorchara and Batya Para villages could save their family properties and could somehow manage to escape death with a single cloth only.

After recovery of dead body of abducted Nurul Islam Nayan, a hired motorcycle driver, at four miles of Khagrachhari-Dighinala road on 01 June 2017, this communal attack was carried out on the pretext of blaming the Jummas.

The settlers first looted Jumma’s homes and shops. Then they pour petrol and kerosene and set it on fire one by one. Even the rice in the house was set on fire by spraying from a gas bottle.

The government has taken steps to rebuild the houses of 176 affected families. Reconstruction work of the burnt houses has already been completed under the supervision of the concerned authorities and most of the families are reported to be staying in their respective homes.

However, even though three years have passed since the incident of communal attack, the main culprits involved in the attack and arson have not been identified yet and proper justice has not been ensured.

Though some perpetrators were arrested after the filing two cases by SI Dulal Hossain on behalf of the Longadu police and Kishore Chakma on behalf of the victims, but all of them have been released on bail due to negligence of the police and the administration.

On the other hand, most of the accused persons in the incident are not arrested or remained out of law and they are roaming around in public. On the other hand, two separate false cases filed by two Muslim settlers namely Md. Mahbub Mian and Md. Marfat Ali against the Jumma people for harassment and conspiracy have not been withdrawn yet.

After the signing of the Chittagong Hill Tracts Accord in 1997, there have been 20 communal attacks including 15 attacks during the Sheikh Hasina-led Awami League government on Jumma people by the organized army-BGB-police-settlers.

But none of the settler Muslims involved in the communal attacks, members of the armed forces and law enforcement, and members of communal organizations were given exemplary punishment.

The government as well as the state have indiscriminately acquitted all of them. Thus, due to the lack of justice, one after another communal attacks and arson attacks on the Jumma people have been on the rise.