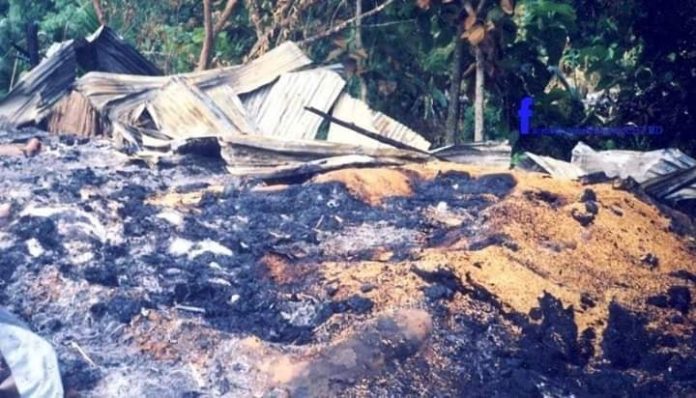 Hill Voice, 26 August 2020, Khagrachari: Today is the 17th year of the tragic and barbaric Mahalchhari communal attack. On 26 August 2003, a total of 14 Jumma villages of 5 mouzas in Mahalchhari upazila of Khagrachhari hill district were attacked by Bengali settlers and more than three hundred houses were completely burnt down and looted. A 80-year old Jumma, along with an eight-month-old baby, was killed. 10 Jumma women were raped. 4 Buddhist temples were destroyed, a government primary school and a few shops belonging to Jumma people. Hundreds of Jummas were injured.

Beginning of the incident:

On 24 August 2003 a businessman and army spy named Rupon Mahajan (30) went missing from Singinala field. The family alleged that UPDF workers abducted him and demanded a ransom of Tk. 5 lakh. Following this incident, settlers led by Ratan Member and Yusuf Member blocked the Khagrachhari-Mahalchhari road at around 4:00 pm demanding release of the abductee. A protest rally was held in the Mahalchari bazar under the banner of Bangali Samannay Parishad (Bengali Coordination Council). Speakers at the rally publicly instigated the settlers with provocative communal rhetoric against the Jumma people. The role of army and police is seen as biased. According to eyewitnesses around the rally, the speakers went on to say, “The administration is on our side, the army are on our side, the police are also in favour of us, so what is the fear of? If the abducted person is not released by tomorrow, we will start burning. While Chairman of Sindukchhari Union Parishad Suinuprue Chowdhury went to the bazar to know about the abduction and blockade, he was detained at a shop for whole night and tortured by settlers. His motorcycle was vandalized.

The day was a market day. When the Jumma people wanted to enter the Bazar to sell raw vegetables, the settlers obstructed them up. Later, when the Jumma people started to sell their vegetables sitting on the side of the road adjacent to Babupara, the settlers also came there and vandalized the vegetables. At around 9:00 am in the morning, the settlers suddenly attacked the Jumma people with a procession. Later, army came and took part in the attack. Elder Binode Bihari Khisa was dragged out of a shop near Sluicegate by army-settlers and hit to dead with the rifles. At that time, the army of 21 EBR supplied petrol and kerosene to the settlers to set fire on Jumma houses by boat.

The widespread protests at home and abroad, including in the Chittagong Hill Tracts were took place against the communal attack. Many progressive individuals, organizations and institutions of the country condemned and protested the incident.