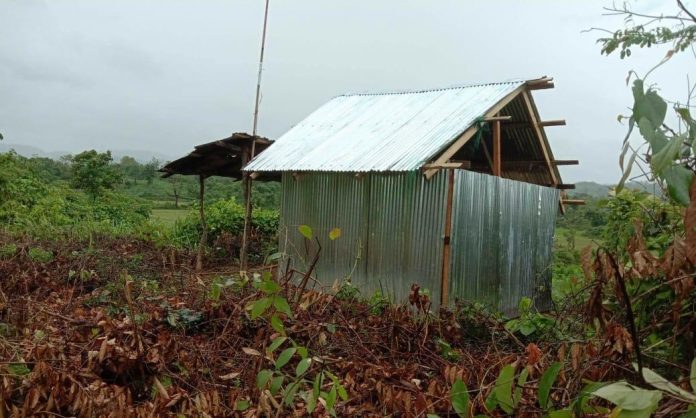 Hill Voice, 26 August 2020, Rangamati: It has been reported that two land grabbers in Bagachatar area of ​​Longadu upazila in Rangamati district have filed a case against the two land owners in the court against the decision of the Longadu Upazila Land Administration.

However, soon after that, the upazila administration arrested the two land grabbers, Md. Abdullah and Md. Al Amin, and removed their illegally built house on the land owned by Nabinchan Chakma.

Later, the upazila administration released them with a written bond from Md. Abdullah and Md. Al Amin.

According to local sources, a Muslim settler from Rangipara Majnu Sarkar’s two sons, Md. Abdullah and Md. Al Amin, recently built a house illegally on Nabinchan Chakma’s land, despite a ban by the upazila administration.

When Nabinchan Chakma informed the administration about the matter, the administration ordered the removal of the illegally constructed house by 20 August 2020. But Bengali settlers did not remove the house and rather filed a case with Rangamati District Judge Court against Nabinchan Chakma, the owner of the land, and his successor Debendra Chakma.

However, on 25 August 2020, at around 11.00 am, Assistant Commissioner (Land) Kyawthowaiprue Marma, Surveyor Md. Khorshed Alam along with police went to the spot and removed the illegally constructed house and arrested Md. Abdullah and Md. Al Amin.

After the same day, the police released them on bail promising to withdraw the case filed against Nabinchan Chakma and Debendra Chakma on the conditions that they would not do anything that would destroy communal harmony including construction of any other type of facility in the disputed land.

It may be mentioned that for some time, the Bengali Muslim settlers of Rangipara of Bagachatar Union of Longadu Upazila have been trying to occupy the 3.0 acres of land settled in the name of Nabinchan Chakma.

As part of this, on the night of 4 June 2020, two Bengali settlers named Md. Ali Ahmed Chowdhury and Abdul Alim Sarkar of Rangipara built a house on the land in the dark of night.

Later, on the request of Nabinchan Chakma, on 22 June 2020, the Assistant Commissioner (Land) along with the police force, surveyors, dignitaries of the area and all the plaintiffs and defendants visited the land and instructed not to carry out any activities in the land till further orders.

But on 24 June 2020, the Bengali settlers again cleared the jungle in the land owned by Nabinchan Chakma and made holes for planting saplings.

The Assistant Commissioner (Land) then asked all the plaintiffs and defendants to meet him at his office on 25 June 2020 with the documents. Although Nabinchan Chakma was able to show all the record documents at the meeting, it is learnt that the settlers could show nothing but a document on the white paper of land purchase.