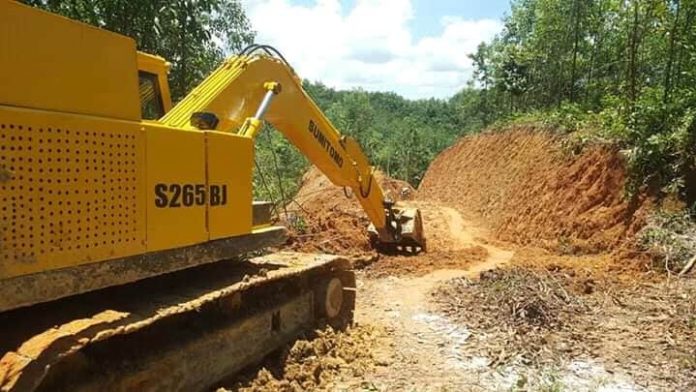 Hill Voice, 28 July 2020, Bandarban:  Road is being constructed by cutting the hills openly with the excavator at a place called Five Mile (Kumari) on the side of Lama-Chakaria road in Lama upazila of Bandarban district. For the past month, a company called “Homeland Planters” has cut down the hills, but no one in the administration has claimed responsibility. It can be said that the adminsutration is playing a silent role.

Locals have complained that not only in Lama Upazila, but also in Alikadam and Naikhyongchhari Upazila, rubber plantation companies and outside influential people have been cutting down hills for construction of roads for a long time to facilitate the transportation of goods.

According to the Bangladesh Environment Conversation Act 1995, it is allowed for government and non-government, and privately owned work to cut hills or alter landforms in any other way. Private 7/8 hills are being cut in the name of making roads.

On 25 July 2020 Saturday afternoon, it was seen that violating this law, a company called ‘Homeland Planters’ was cutting 6/7 hills in the name of making a road for plantation with excavators.

Already 6/7 of the hills have been cut in half. At that time 20/25 workers including excavators were cutting the hills and filling the soil in pickup. Talking to the workers working on the hill cutting, it was learnt that in addition to the 6/7 hills cut, 2/3 more hills will be cut. 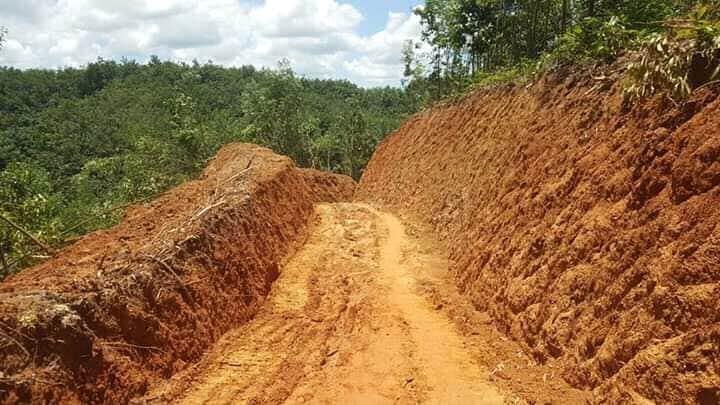 Lama Upazila administration officials used to come and go through Lama-Chakaria main road every day. While they pass through the main road, they can see the hill cut. Most of the huge hills have been cut down if they go to the side of the road.

Caretaker of Homeland Planters, Saiful said, ‘Everyone knows the matter. Managing everyone, we started cutting down the hills. The owner of the garden, Tariq Ahmed, lives in America. From there he manages everything.

Mr. Sujit is in charge of the garden. Asked for a number to contact Sujit, Saiful added that his number could not be given. If you want to know something, talk to the top officials of the Lama.

Officer-in-Charge Lama police station Mohammad Mizanur Rahman said, ‘He doesn’t know anything about cutting down hills. We have to find out. I will go to the scene and look into the matter.

President of Lama Upazila Environmental Protection Council, Tayyab Ali said cutting down hills should be stopped immediately to maintain the balance of biodiversity and nature. Those who are cutting down the hills need to be prosecuted under criminal law. Then the issue in the area will remain as an example.

When asked, Lama Upazila Executive Officer Nur-e Jannat Rumi said, “I did not know the matter. I am leaving Lama Upazila on Sunday due to transfer. I will tell the matter to new UNO, Reza Rashid, to take legal action against those who have cut down the hills.

Samiul Alam Kursi, Assistant Director of Bandarban district of the environment department, said, “Action will be taken to find out.”

Locals said that not only in Lama Upazila, but also in Alikadam and Naikhyongchhari Upazila, various rubber plantation companies and influential outsider leaseholders have been cutting down hills for construction of roads for a long time to facilitate the transportation of goods.

One of the examples of this is the construction of a road from Baishari Headman Chak Para to Longadu Chakpara in a rural and uninhabited area by showing a fake project by PHP Rubber Company in Naikhyongchhari Upazila with the funding of Chittagong Hill Tracts Development Board.

On plea of tourism and by illegally occupying 1000 acres of land, in March 2020, Md. Shafiullah, Chairman Naikhyongchari Upazila Parishad and also President of Naikhyongchari Upazila Awami League Branch, a project was undertaken with the funding worth of BDT 12 million from the Bandarban Hill District Council for construction of roads and dam in those illegally occupied areas.  For this purpose, 8 kilometers mud road has been made by flattening 15 hills while destroying the natural environment prevailing there. The streamlet is being filled up to construct the dam.

Bricks road has been built by cutting down hills and damaging the environment at Baishari in Naikhyongchari upazila with LGED funding to facilitate the transportation of garden goods of Rubber Garden of Professor Nizam Uddin.

On the other, the 16 Construction Battalion (18 ECB) of the Bangladesh army is working on the construction of Alikadam-Kurukpata-Poyamuhuri road from Alikadam Upazila in Bandarban by cutting huge hills that resulted damages of environment and biodiversity and also villages of the local indigenous Jumma people.

Thus, many companies, influential leaseholders, ruling leaders and outsider land grabbers are cutting down hills for building roads in the name of rubber plantations, horticulture and setting up tourism centers with the funding of the Chittagong Hill Tracts Development Board and Bandarban Hill Tracts District Council. The administration and the police are playing a silent role by pretending not to see.