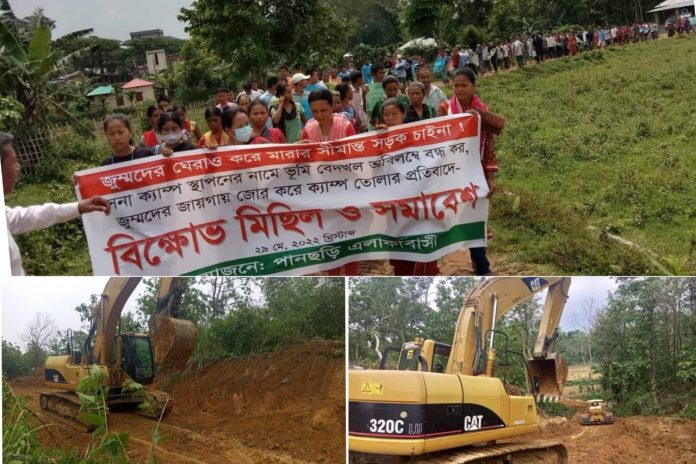 Hill Voice, 29 May 2022, Khagrachari: Residents of Panchari area of Panchari upazila of Khagrachari have staged a protest procession and demonstration against the occupation of lands of Jumma peoples by army in the name of construction of border road and setting up of army camp in Natun Shankhola and Ghilatli Para villages bordering India.

It is learnt that the road will connect Tanakka Para of Matiranga in the south and Dighinala-Sajek in the north. The construction of the road is likely to damage the plantations, crops and houses of many Jumma people along the road. The local people will suffer huge losses.

It is learnt that the procession and demonstration was held at 10:00 am on Sunday (May 29, 2022) to protest against the occupation of land in the name of construction of the border road and setting up of camp in No.2 Chengi Union area of Panchari upazila.

Tarun Jyoti Karbari from Bharatbarsha Para, presided over the demonstration after the procession with the slogan ‘No border road to destroy Jumma people by besieging’, ‘Stop land occupation immediately in the name of setting up army camps’.

Land owner Jamini Kanta Chakma said army personnel were forcibly setting up camp in my plantation. As a result, I have to lose about 25 acres of land, including my plantation. I don’t want any army camp there.

The speakers also demanded to stop construction of border roads by occupying lands of Jumma people and destroying forests and hills and setting up of camp forcefully on the land of Jumma people in Shankhola Para.

According to local sources, a group of BGB members came from Dhudhukchara and obstructed the demonstration.

In it, the army and the BGB commanders talked about their development activities in the CHT and the various facilities if the border road is constructed. Army’s 20 ECB Commander Lt. Colonel Riazat said the army have been constructing border roads in the CHT since 2019 under the direction of the Prime Minister. In the first phase, 317 km road construction work is underway, of which some works have been completed and some work is in progress, he added.

However, the meeting promised to provide adequate compensation in case of damage to houses, plantations, lands and crops during road construction. But due to ongoing border road construction work from Sajek, Harina and Ramgarh to Matiranga’s Tanakka Para, those whose houses have been evicted and their plantations and crops have been damaged have not been properly compensated.

Then on 26 May 2022 road construction materials including bulldozers were taken to Shankhola Para area and land cutting work has been started from 28 May. It has been alleged that an army ECB base camp is being set up in the land of Jumma people in the area to facilitate road construction.