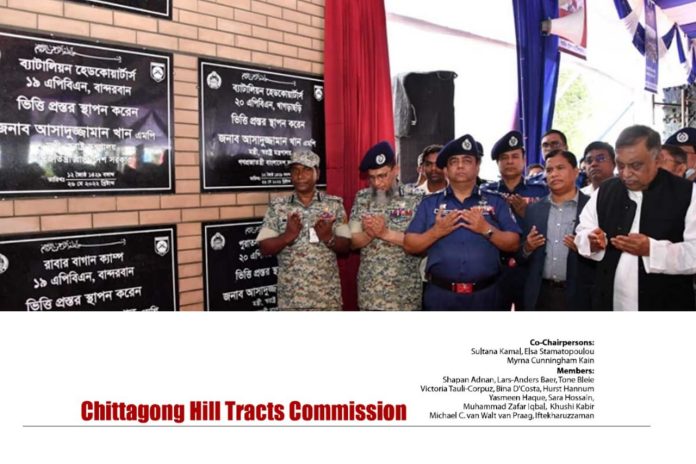 Hill Voice, 28 May 2022, International Desk: The International Chittagong Hill Tracts Commission (CHTC) is deeply concerned to learn about the government introducing a new unit of the Armed Police Battalion (APBN) to replace the vacant army camps in Chittagong Hill Tracts (CHT). The Commission believes this is a direct violation of the CHT Accord, which stipulates that temporary military camps will be withdrawn, but does not mention anything about the camps being replaced by APBN.

CHTC expressed the concern in a press relaese issued by its three Co-Chairs, Sultana Kamal, Elsa Stamatopoulou and Myrna Cunningham Kain on 28 May 2022.

In the press release, the Commission said that as reported by various print and electronic media, on 26 May 2022, Honourable Home Minister Asaduzzaman Khan Kamal laid the foundation stone for four to be established units of APBn in the three districts of the CHT. The event was preceded by a decision of the government to deploy APBn at the vacant army camps in the CHT. According to a recent government circular (Memo No- APB:H: Q:/Intelligence-2022/2306, dated 13 April 2022), signed by Mosa: Sadira Khatun, Police Super (Intelligence), on behalf of the additional IGP of APBn Headquarter– the government will deploy APBn in 240 withdrawn army camps in CHT. APBn will be deployed in 30 such abandoned camps in the first phase.

The Commission is surprised by this decision of the government. Instead of withdrawing the rest of the temporary army camps from CHT, deploying APBn in place of the abandoned ones is a direct violation of the letter and spirit of the Accord. The Commission is also worried about the threatening speeches made by the Inspector General of Police (IGP) Dr. Benazir Ahmed, and GOC of the 24th Infantry Division of the Bangladesh Army, Major General Md. Saiful Abedin, at the event.

For instance, according to a quote from Major General Md. Saiful Abedin’s speech against the so-called terrorist in CHT, “If you want to wage war…. let’s choose a place! We will destroy you in 30 minutes”.

The Commission finds this kind of speech from a high-level official undemocratic, unprofessional, and threatening. It is hostile towards the Jumma peoples and is racist and discriminatory. It indicates that the government wants to deal with the CHT issue with muscle and violence instead of handling it politically and peacefully.

The Commission is also worried about how the security forces continue to label the organizations and individuals engaged in the movement demanding implementation of the CHT Accord and for the rights of the Jumma people as ‘terrorists,’ whereas there are allegations that the security forces supporting certain armed vigilante groups in CHT who are carrying out extrajudicial killings, enforced disappearances, torture, harassment, and intimidating the activists of the two leading political parties in CHT, the Parbatya Chattagram Jana Samhati Samity (PCJSS) and the United People’s Democratic Front (UPDF). Both political groups have been reporting such activities since 2017.

There are also allegations of continued widespread human rights violations by the security forces in CHT that needs to be investigated impartially.

The Commission calls on the government to withdraw the de facto military rule ‘Operation Uttaran’ (Operation Upliftment) and all the temporary camps from the CHT as expressly laid down in the Accord.

The Commission also urges the government to discuss with the relevant and concerned groups such as the CHT Regional Council, regional political parties, traditional institutions, and the Civil Society Groups before making any important decision related to the CHT, such as deploying APBn at the abandoned army camps or elsewhere.

Prompt and independent investigation of allegations of human rights violations and bringing to account those responsible; ensuring protection for indigenous rights activists from extrajudicial killings, harassment, intimidation, and arbitrary arrests; and declaration of a roadmap and time frame for implementation of the 1997 CHT Accord fully and without any further delay were also included in the appeal of the CHTC.