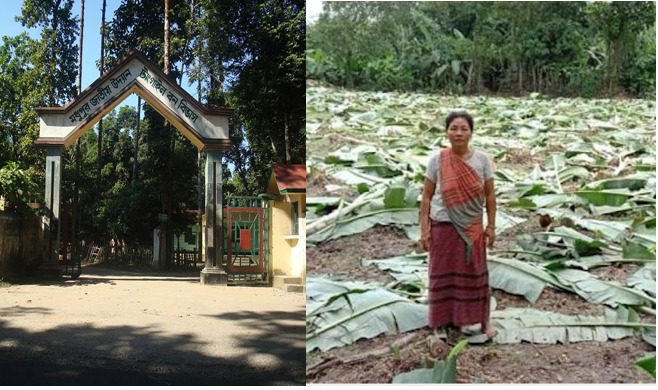 A group of Garo young women walk along every vein of the Shalban (Shal Forest). When it comes to reviewing the discussions about the Garo people of Madhupur, the first names that come to mind are Shal forest, Piren, Chalesh. On the contrary, the state protectionist ecosystem comes before us in a new way. In order to analyze the character of the state, we have to go back to the eco-park project centered on the Shal forest of the Forest Department funded by the World Bank and the Asian Development Bank in 2000.

The settlements Garo, Koch, Banai and Burman people have been established for hundreds of years around the 478 sq km Shal forest of Madhupur in Tangail district. Those whose economy depends mainly on this forest. But the government plans to set up an ecopark project where 10 picnic spots in the middle of the forest, 8 barracks and boundary walls will be built around it. However, the state structure and administration continue with this project without the knowledge of the Garo, Koch, Banai and Burman people who have been living for ages.

Where the main message of the state was to protect the vast forest area of ​​Madhupur. But when we review the history, we come across some issues, some parts of the state’s reactionary protectionist policy where Garo villages from 103.5 acres of the land during the rule of Zia government in 1979, and then 211.9 acres of the land in 1984 were evicted. Air force firing range is created on these lands. Again, from 1989-95, the Forest Department started the social forestry project on 7 thousand acres of lands and rubber plantation project on 8 thousand acres of lands with the aim of destroying the naturally generated Shal forest as well as eviction of indigenous people from their ancestral lands.

In contrast, the state’s conservation policy has repeatedly come to a point where on September 14, the forest department cut down 0.40 acre of the banana plantation of a Garo woman in Madhupur in the name of forest protection, using Reserve Forest, Eco-Tourism as weapon. As a result, conservationist ecosystems are becoming more and more active in the name of protecting the forest of the state structure in the Shalban of Madhupur, the main purpose of which is to evict the indigenous people and to destroy their livelihood. In such a situation, the Garo, Koch, Banai and Burman indigenous peoples who have been living for centuries there are walking on the path of extinction.