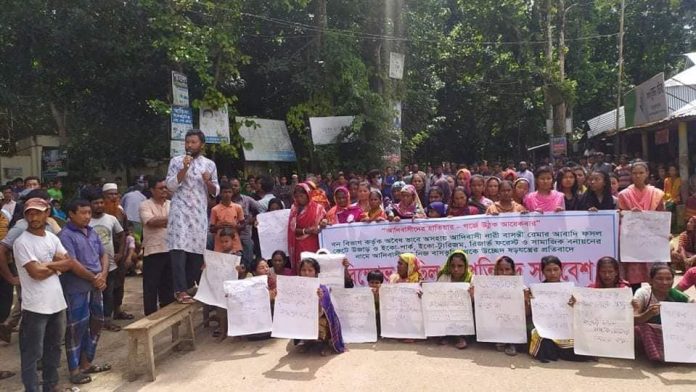 Hill Voice, 18 September 2020, Tangail: a seven-day ultimatum has been issued by indigenous Garo people demanding to stop the conspiracy and seeking remedy of eviction of indigenous people from their ancestral land and homesteads in the name of eco-park-eco-tourism, reserve forest and social afforestation in Madhupur region including the justice for cutting of banana plantation of Basanti Rema.

At a rally held in Madhupar on 18 September 2020 Wednesday, the agitated Garo people warned that otherwise a strict program including highway blockade would be announced.

According to the pre announcement, a protest procession started from Garo Bazar (Bhutia Bazar) junction on Wednesday at 10:30 am and went around the Dokhla Range Office, but was stopped by the police while the agitated people started to surrounding the Dokhla Forest Office. At that time, the officials of the forest department informed that due to special reasons, the date for the settlement has been changed to September 24 instead of today. At that time, outraged Garo people held a protest rally there.

Indigenous leader Ajay a Mree at the rally said “It is a pity we have been struggling here since 1962 for the rights to our land and livelihood.” He again said, we have this right. Putting the question, this indigenous leader said, in what year is the forest department coming here? The Forest Act was passed in 1927 but the Indigenous peoples have been living here for hundreds of years. So who came to this region before the forest department or before the Indigenous peoples? Then why are you suppressing us that much?

Chairman of Sholakuri Union Parishad Akhter Hossain expressed solidarity with the protest rally and requested indigenous people not to do anything before the next 24th September. Attempts will be made to resolve the issue on the 24th September. If no solution is reached, I will stay with you and cooperate with the program that you will announce.

If the conspiracy of the eviction of the Indigenous peoples from their homesteads and the cutting down of Basanti remar banana plantation by the forest department in the name of eco-park-eco-tourism, reserve forest and social forestry in Madhupur valley is not resolved by 24 September, the indigenous Garo people will throw a tougher program including blockade of Tangail-Mymensingh highway.