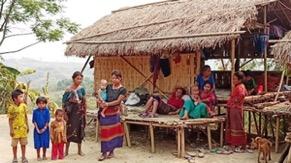 Hill Voice, Baghaichhari, 1 April 2020: The measles outbreak in Sajek has claimed further death of 1 child and fresh infection of 9 more villages in Udolchhari Chakma village of Sajek Union under Baghaichhari Upazilla of Rangamati Hill District. The adolescent child aged 15 died at dawn on 31 March 2020. With this, the death toll of children has risen up to 10 in Baghaichhari of Rangamati hill district, Dighinala of Khagrachhari hill district and in Lama and Ruma of Bandarban hill district – in all the 4 Upazillas,

Besides, it has been learnt that the children are getting freshly infected with measles in the villages of Boroitali Para, Chip Para, Sat Nong Para, Ujanchhari Para, Shilchhari Para, Kojoichhari Para, Bhuachhari Para, Lambak Para and Betbunia under Sajek Union.

It is to be mentioned that towards later in February 2020, more than 250 cases of measles infection were with the remote indigenous Jumma villages of Arun Para, Lunthian Para, Tarun Tripura Para, Kamalapur Chakma Para, Newthang/Natun Para and Haichya Para of Sajek Union. Of them, most patients were children.

Since February 2020 onward, 8 children died of measles infection in the aforesaid villages of Sajek Union. Besides, 1 child belonging to the indigenous Mro community of Lalya Para under Lama Upazilla and another 1 child of Tripura indigenous community of Chandra Tripura Para under Merung Union of Dighinala Upazilla under Khagrachari hill district died of measles infection.

It is learnt that the children of these measles infected areas have never been vaccinated earlier. Even no physician has ever visited those places. The Jumma people of these areas are dependent upon Jum cultivation – the only means of livelihood. Out of Jum cultivation, they can grow food grains for a period as best as 3 to 6 months in a year. For the rest months of the year, they have either to pass half-fed or in starvation. As a result, most of the children suffer from malnutrition in those areas.