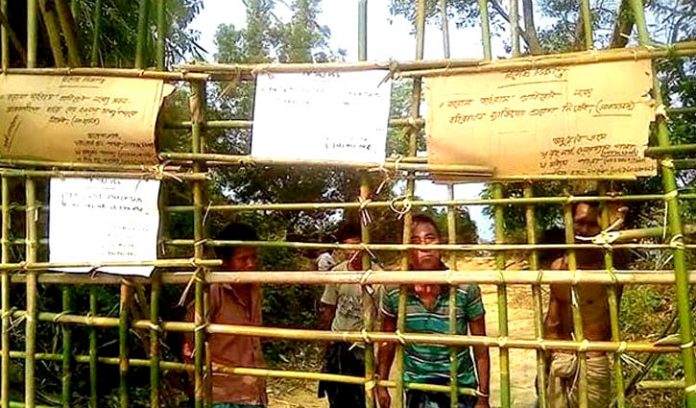 Also in the remote villages of indigenous Mro community living in Bandarban Hill District of Chittagong Hill Tracts region in Bangladesh, there has erupted the fright of pandemic corona.

Though the Bangladesh government is yet to declare lockdown throughout the country, the Mro community of Bandarban has put the ‘lockdown’ in place following their own traditional method at own initiative to prevent the globally surging infection of corona virus spread in their villages.

They have barred all the entrances to their villages with the fence made of bamboos and wood voluntarily collected from the natural forests of their territories so that no outsider should enter their villages. Basically, such a measure is taken up for a certain period of time to prevent or get control over any epidemic disease, when it breaks out. Such prohibitional blockade at the entrance or otherwise called lockdown is an indigenous traditional practice of the Mro community society during the situation of outbreak of any epidemic desease – an exercise of faith called ‘Khasur’. They continue this self confinement with strong zeal and strictness until the epidemic gets over.

Though being dwelt in an environment largely affected with backward road communication system, extensively lagging behind in institutional education, lacking of modern information technology & mass-communication facilities and various socio-economic and socio-political sufferings, this indigenous practice of the Mro community in beating the coronavirus infection has been able to draw attention of various sections of people. While there has cropped up a grave concern over possible prevention of corona spreading due to unconsciousness and non-compliance of directives despite declaration of shutting down and leaving of different institutions, directives and announcement including prohibitions on mobility and staying in home-quarantine issued by the government and administration, in such circumstance, the step that has been taken up by the Mro community is being considered as an illustration of inspiration and a learning for all. This indigenous and unique social measure has illuminated the society at large with a new light by the graceful articulation of various social media like face-book and different national dailies.

It is learnt that this lockdown measure has been taken in most villages populated by the Mrocommunity living in Bandarban hill district to prevent the coronavirus infection and also measles, which has already become an epidemic throughout the CHT. The indigenous Mro villagers have declared lockdown to be observed in traditional way in 20 villages located in the east and west of Bandarban district town including 30 more villages on the east of Chimbuk Hill, in 17 villages of Tonkaboti union of Bandarban Sadar upazila and in most of the villages in different areas of Alikadam, Ruma and Lama upazila of Bandarban Hill District.

As the self-arranged lockdown continues, any relief or aid materials brought for them by the government and non-government various authorities, they are requested to leave them at outside of the locked entrance or closed gate.

In every Mro village, during locked down, there is an independent house constructed outside the entrance as an arrangement for relaxation of strangers or staying, in case if any relative or guest of some villager happens to come there for any need.

Not only this, printed leaflets in Mro language for awareness about coronavirusis being articulated among the people who cannot read and understand Bengali. Written notices along with various directives have been put in front of the closed gate of every village. Many term this system of the indigenous Mro people as a ‘unique’ arrangement.

It is needless to say that the Mros, one of the fourteenth indigenous peoples of CHT, are also a backward community of the region. They are ever ignored, deprived and oppressed in many ways. Most of the time, they fall prey to eviction from their own lands; sometimes they are compelled to stay in fear of eviction because of government and non-government aggression on pleas of various development programs.

Recently, measles infection has gripped all the three hill districts of CHT claiming 10 children’s lives while several hundreds infected. The indigenous Mro community living in Bandarban hill district has got also severely affected by this epidemic desease. In the mean time, 1 Mro child aged 4 years has died and around 42 persons have got infected. Of them at least 33 are children. Lalyapara village of Lama Upazilla under Bandarban is one of the severely infected dwellings mostly populated by the Mro community. On the other, at least 6 more Mro children from different villages of Ruma Sadar, Galengya and Tindu union of Ruma upazila and Sadar union of Bandarban Sadar upazila of Bandarban Hill District have been admitted to the Ruma Hospital for being infected with measles. On top, the corona virus infection is a new threat to the Mro indigenous community, which is all set to combat it by keeping the villages in absolute isolation, otherwise, in modern words, locked down.

Besides, the Mros are also facing serious water crisis emanating from uninterrupted stone extraction by different outsider business-men from the natural streams, springs and streamlets in the areas inhabited by the Mros. They have been alleging of getting the natural water reservoirs dried off and that the bio-diversity and natural environment are at catastrophe in their areas. There is an allegation of illegal extraction of natural stones and by some outsider business-men and their local agents and at the same time, the road construction project being conducted by the army, the programs of which are the responsible for such disasterous situation in their areas.

On the other hand, the life and livelihood of many indigenous Mro people have been endangered as a result of setting up of tourism centers by various influential quarters and government authorities. This initiative has caused forceful eviction, land grabbing, destruction of lands and natural resources by the outsider companies and land plunderers alongside the damage being done by the government authorities.