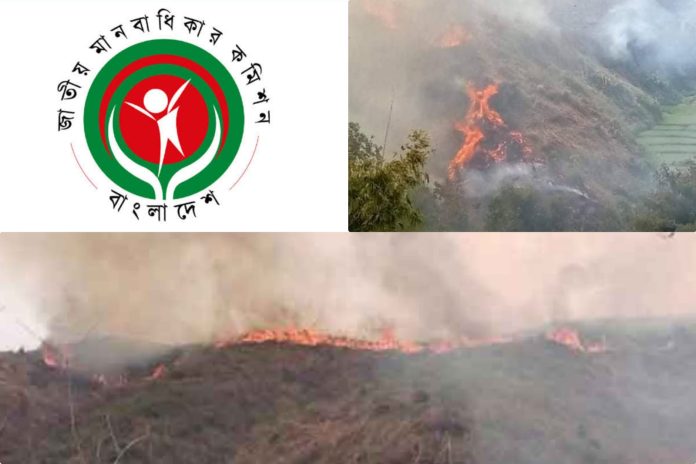 Hill Voice, 12 May 2022, Bandarban: The National Human Rights Commission (NHRC) of Bangladesh has found the primary truth of the attempt to evict the local Mro and Tripura indigenous people by burning about three hundred and fifty acres of Jum farm and natural forest and destroying water springs in Lama upazila of Bandarban. This information was given in a press note signed by the public relation officer of the NHRC, Farhana Sayeed, on Wednesday (May 11, 2022).

In addition, the press note said that the Commission has drawn attention to the plight of the people of three villages due to lack of food and potable water. Following the incident, a delegation from the NHRC recently visited the scene.

During the visit, they got to know the initial truth of the incident by talking to the local people and the victims. Later, the Commission also announced four specific initiatives in this regard as effective steps.

According to the press note of the NHRC, about 350 acres of Jum cultivation and natural forest in Langkom Karbari Para, Rengen Karbari Para and Joychandra Tripura Karbari Para of Lama Upazila was burnt and water springs were destroyed on April 26. Subsequently, the Commission drew attention to the information received from various human rights organizations and stakeholders on the plight of the people of the three villages due to lack of food and drinking water.

It is also known that due to the food crisis, some people of the local community have been living on forest leaves and herbs. The report said that Lama Rubber Industries Limited had been trying to evict the Mro and Tripura people in the area for long ago. It is also mentioned that there is an attempt to compel the locals to leave the country by filing cases against them at different times. As per collected information, NHRC has found primary truths of the allegation.

The Commission is of the opinions that it is urgent to take immediate action to protect human rights. The Commission has recommended the following initiatives in this regard-