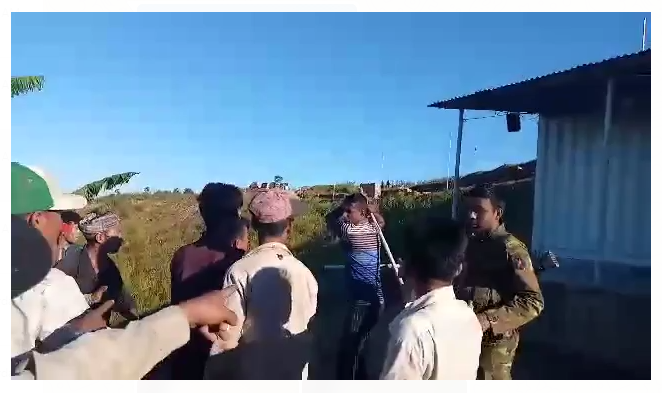 Hill Voice, 7 January 2021, Bandarban: Army personnel stationed at the construction site of a five-star hotel and tourist facility in the heart of Chimbuk hill in Bandarban district have allegedly threatened to kill the indigenous Mro people of Dolapara and prevented them from collecting wild broom (Ful Jharu) in the forest. The incident took place on January 5 and 6, 2021 for two consecutive days.

According to local sources, on January 5, 2021, when the indigenous Mro people of Dolapara village went to cut plants of wild broom in their traditionally owned and used area of the Naitangpara hill, the army personnel who were already engaged in the construction of five star hotels and tourist establishments there stopped and drive away them.

In protest of this incident, on the morning of January 6, 2021, the villagers all went to cut the plants of wild broom. As usual, they were prevented up even that day. There, plain-clothed army personnel and people of the Sikdar group tried to beat some Mro villagers with sticks. When the villagers protested, they were abused and threatened to kill.

Dolapara villagers spread the video footage of abusing them in obscene language through social media. In the captured video footage, Mro people are protesting and saying ‘our land, our land, our ancestral property. We have been living here for many years. We will die here. Here’s our land. Birth and death are all ours here. We don’t care about death. We want to live together if we live. We want to die together.’

At that time, a member of the army in white clothes said, today I will bury the whole land in your ass, your birth and death will be here today.

It is learnt that after the incident, the people of army and Sikder Group called the local people’s representatives and gave strict instructions not to organise protest against the incident in the future.

It is worth-mentioning that though 62 prominent citizens of the country including Jumma people of all walks of life in CHT, various political, social and environmental organizations and various national and international human rights organizations have demanded to stop the construction of this five star hotel and tourist facility, the army and Sikder group still continue their construction work.

The army and the Sikder group have not yet shown respect to the demands of the aggrieved people, prominent citizens of the country and human rights organizations. On the contrary, they have been obstructing the movement of the local indigenous Mro people and showing extreme contempt at the protest.

It is to be noted that recently the army and the R&R Holding Limited, a subsidiary of Sikder Group jointly have taken initiative to build a five-star installation named ‘Marriott Hotels & Resorts and amusement park’ in Kapru Para, Dola Para and Shong Nam Hung areas on the Chimbuk-Thanchi road in Bandarban district of CHT. The five-star hotel and amusement park will be built using about 800 to 1,000 acres of land.

It has already been started to cut down the hills for the need of this installation. It has a large area of common forest of indigenous Mro people, Jum hills, villages, forests and orchards, crematoriums, hills, forests and water sources. Similarly, villagers of Markinpara, Longbaitangpara, Mensingpara, Riyamanaipara and Menringpara will be evicted.