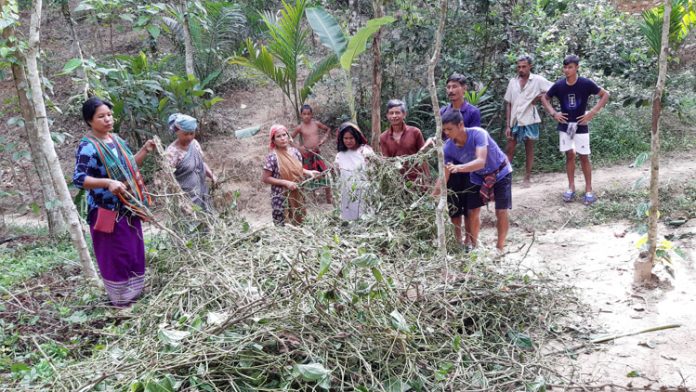 Hill Voice, 6 August 2020, Moulvibazar: After being caught stealing betel tree saplings in Singur Punji of Baramchal Union in Kulaura Upazila of Moulvibazar and beingreleased on bond, a local Bengalinamed Fakhrul Ali and his gang have cut down saplings of different species of trees, including more than 800 betel trees, in three betel Jums of Khasi peopleover night.

According to local sources, on 4 August 2020Tuesday at the evening, Fakhrul Ali, son of Samir Ali, a resident of West Singur Greasing area of ​​Baramchal Union, stole 250 betel tree saplings from the betel Panju of Jaspal Patam,a resident of Singur Punji. At that time, the Khasi people, including Jaspal Patam, a resident of the Khasi punji, caught him in red handed and brought him to the Punji.

Then an arbitration was held with the people of Singur Punji and area of Fakhrul Ali to resolve the issue. At the meeting, he was released in the custody of his family, including locals Ruhel Mian, Jahed Ali, Nanu Mian, Islam Uddin and Fazal Mian, on the condition that he would not commit such thefts in the future.

At that time, Fakhrul Ali publicly threatened, “Even if you take a bond from me a hundred times, you will not be abl 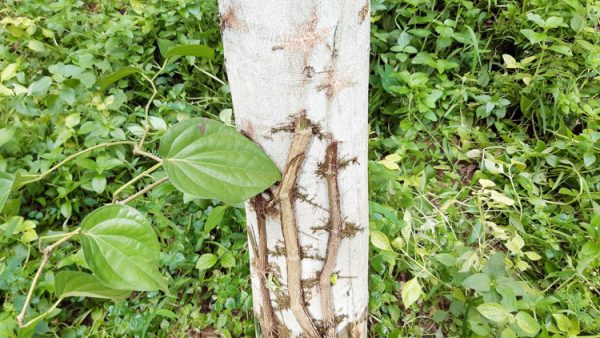 e to do anything to me, I will harm your capital.”On that day, the people of Punji kept vigil till 2am to protect the betel Jum for fear of attack by Fakhrul Ali.

At one stage, when they returned to the Punj, in the middle of the night, the identified thief Fakhrul and his men cut down around 250-350 betel leaves from the betel Jum of Dalim Khangshtia, a resident of the Punj, and 200-250 betel, agar and betel trees from the betel punji of Lipton Marak. Sub-Inspector (SI) of Kulaura police stationRafiqul Islam visited the spot.

Singur punji’s Montree (Head of punji) Binet Manar said, “There are 50-60 Khasi families living in our punj. Everyone makes a living by cultivating betel.In the middle of the night on Tuesday, the identifiedthief Fakhrul and his associates cut down various species of trees, including betel trees, in our punj. This damagedour property worth approximately 5 lakh.

Dalim Khangshtia, a resident of Punji, filed a case accusing the two persons involved.Indigenous leader Flora Babli Talang, General Secretary of the inter-punj development organization ‘Kubraj’, said the miscreants cut down various species of saplings, including betel trees, from the betel Jum of indigenous people not onlyin Singur punji, butalso in different punjees of Kulaura upazila.Due to which the betel growers face considerable financial loss. We are always in panic now. I have informed the matter to the administration more than once.

Kulaura police station SI Rafiqul Islam said that after inspecting the spot, it was found that different species of trees including betel trees were cut down from the betel Jum. A case has been filed in this regard. Necessary legal action will now be taken against those involved in the investigation.