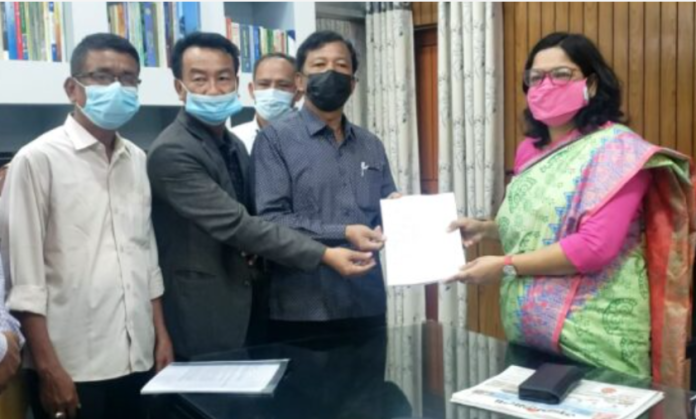 Hill Voice, 2 March 2022, Rangamati: The Headmen (Mouza Heads) of the Chittagong Hill Tracts (CHT) have demanded the intervention of the Prime Minister to uphold the CHT Regulation of 1900 enacted by the British. The headmen of the CHT made the demand in a memorandum sent to the Prime Minister through Rangamati Deputy Commissioner Mizanur Rahman and Bandarban Deputy Commissioner Isachmin Parveen Tibriji on Wednesday (2 March).

The leaders of Headman Association submitted a memorandum to the Prime Minister through the Rangamati Deputy Commissioner.

In 2003, during the BNP government, this law was declared dead in a case of the High Court Division. During the tenure of the present government, in 2017, the Appellate Division rejected this judgment and declared the CHT Regulation 1900 as a valid and effective law. On October 25, 2021, a person named Abdul Aziz again challenged the judgement of the Appellate Division and applied for review. The issue, which has already been settled, has been raised again, hence the headmen of the CHT region have been expressing concern over it.

The memorandum further said that the purpose of this review sought by the vested interest was to undermine Bangabandhu’s non-communal, secular, pluralistic progressive character. It is unconstitutional to undermine the distinct existence, identity, uniqueness, tradition, way of life and fundamental rights of the different hill tribes of the CHT which is unconstitutional.

Meanwhile, the President of Bandarban Headman-Karbari Association Hlathowai Hri, General Secretary Unihla and others were present while handing over the memorandum to Bandarban Deputy Commissioner. In the memorandum, 60 headmen of Bandarban gave their signatures and expressed their concern.