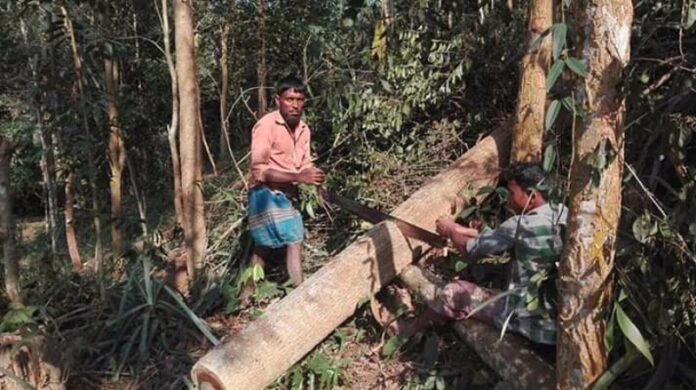 Hill Voice, 27 December 2020, Bandarban, Own Correspondent: In the last two months, centuries-old trees have been cut down in the remote reserve forests and sanctuaries in Alikadam and Thanchi areas of Bandarban. According to satellite images, about 100 acres of forest land have been completely cleared in the last few years.

Witnesses and locals in Thanchi alleged that a syndicate led by timber traders from Bandarban town and Chittagong had been cutting down trees from the hilly forest during the winter for the past few years.

However, the forest department never took action against it. They have always said that they are not able to guard the protected forests due to lack of manpower.

There are also allegations of direct and indirect involvement of forest officials in the looting of forest trees.

The total area of ​​Sangu Reserve forest is 82,080 acres. From the satellite images taken on November 30, 2016 and November 29 this year, the daily star has clearly seen that the forest has been deforested for the last few years.

Satellite images taken and analyzed by the Bangladesh Space Research and Remote Sensing Organization (SPARSO) shows that the trees are being cut down from at least 24 spots from the large forest areas.

Dr. Md. Mahmudur Rahman, Sparso Chief Scientific Officer, has analyzed a picture of an area of ​​867 hectares (more than two thousand acres) in Sangu reserve forest of which all the trees of at least 40 hectares (about 100 acres) have been cut down.

Mahmudur said, looking at the pictures taken in 2016, 2019 and 2020, it is clear that the forest is being cleared every year by cutting down the trees. Local people said that deforestation is being done every day in the hilly protected forests. None of them are interested in revealing their names.

An eyewitness who recently visited the Andarmanik and Narisha Jhiri areas said he saw people cutting down trees. They originally came from Chakaria in Cox’s Bazar.

He said, ‘they have set up tents in Narisha Jhiri and are arbitrarily cutting down hundred-year-old trees with petrol-powered electric saws from the Sangu reserve forest. If this going on, one day the forest will be completely destroyed.’

Sangu is being destroyed.

Nu Mong Pru, a local resident of Thanchi, said last month, ‘Trees have been cut down indiscriminately from the Sangu reserve for the past few months. After publishing the report in the daily star, they stopped cutting down trees for several weeks.

Cha Sa Thowai Marma, Vice Chairman of Thanchi Upazila Parishad said, ‘In the last few months, smugglers have cut down about 30,000 feet of trees from the Sangu reserve forest.

He got this information from someone who had seen the cutting down of these trees illegally. He added, ‘The trees are being cut down and taken to Bandarban town through Sangu river. After arriving in Bandarban, they are being sent to Dhaka and Chittagong.

In most cases, locals claim that forest officials directly or indirectly help to smuggle timber from the reserve forests in exchange for large bribes.

Abul Bashar, president of the Bandarban District Timber Businessmen’s Association, said, “About seven or eight unscrupulous traders are cutting down trees in the forest. Most of them are from Chittagong.”

A local resident of Thanchi upazila, speaking on condition of anonymity, said he took about Tk. 14 lakh to Tk. 15 lakh in cash from a timber trader named Jamal to supply timber from the Sangu reserve forest.

According to local sources, Chittagong resident Md. Jamal Uddin is one of the timber smugglers in this forest.

When contacted Md. Jamal denied the allegations, saying, “I have nothing to do with cutting down trees in the Sangu reserve forest. I bought these from those who send these woods from Bandarban to Chittagong and Dhaka.’

Bandarban Divisional Forest Officer Farid Mia denied that trees are cut down from this forest. He said, “We have sent letters to Balipara BGB and Alikadam BGB to assist us in protecting the reserve forest. Following the recent news, we have also formed a five-member inspection team led by the ACF (Assistant Forest Conservator).

Chief Conservator of Forests Amir Hossain Chowdhury said, “We have heard about the cutting of trees in the Sangu reserve forest and we have formed a three-member inquiry committee to look into the matter.” We will take action after receiving the report of the committee. ‘

In 1880, Sangu was declared as a reserve forest. There are 36 species of mammals, 48 ​​species of reptiles, 19 species of amphibians and 11 species of rare birds.

Botanist Farid Uddin Ahmed, Executive Director of the Aranyok Foundation, said the forest has many rare species of old trees.

The most important tree species in the Matamahuri and Sangu reserve forests are Gamar, Gorjan, Chapalish, Tun, Goda, Gutgutia, Champa, Civit and Shimul.

Dr. Reza Khan, currently wildlife expert at the Dubai Zoo, said he went to the Sangu reserve forest last year and saw trees were being cut down.

He said, ‘Actually all the government officials in Bandarban know about the cutting down of the trees. It is not possible for anyone to continue cutting down trees without the knowledge of law enforcement or the administration and forest officials.’

Other protected forests in Bandarban are at risk

The district has three main protected forests. They are Matamuhuri of Alikadam, Bamu Bilchhari of Lama and Sangu of Thanchi upazila.

Two top forest officials in Bandarban, who did not want to be named, said that many areas of these forests have become vacant and barren due to indiscriminate felling of trees.

An official from the Lama Forest Department said about two-thirds of the Matamuhuri and Bamu reserve forests have been destroyed due to the cutting down of most valuable mother trees.

Lama Divisional Forest Officer SM Kaiser said, “It is really difficult to protect 104,881 acres of land with only 14 workers in Matamuhuri and Bamu forests.”