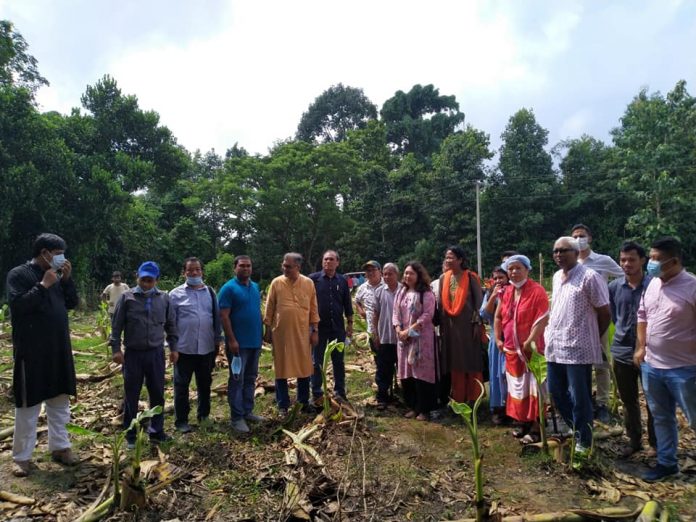 Hill Voice, 26 September 2020, Tangail: At the initiative of Bangladesh Indigenous Peoples’ Forum (BIPF), a civic delegation from Dhaka visited the site of the destruction of banana plantation of Basanti Rema by the Forest Department in Madhupur.

During the on-site visit, a public meeting was held in the premises of Basanti Rema’s house in Pegamari village of Madhupur. Speakers at the public meeting said that indigenous people have been living in Madhupur forest for ages. They have been living here since time immemorial, being intimately involved with the forest. Indigenous people are the real custodians of the forest. The speakers expressed the view that Basanti Rema should become a symbol of the resistance of the indigenous people in the future.

The speakers further said that the Constitution was drafted in 1972 at this Dokhala area in Madhupur. If Bangabandhu had survived till today, he would have shocked seeing sufferings of Basanti Rema. It is unthinkable that such a frenzy can be done by a state institution. The government is encouraging agricultural production. But the forest department has destroyed the plantation. Today, the destruction of Kalabagan means killing the indigenous people.