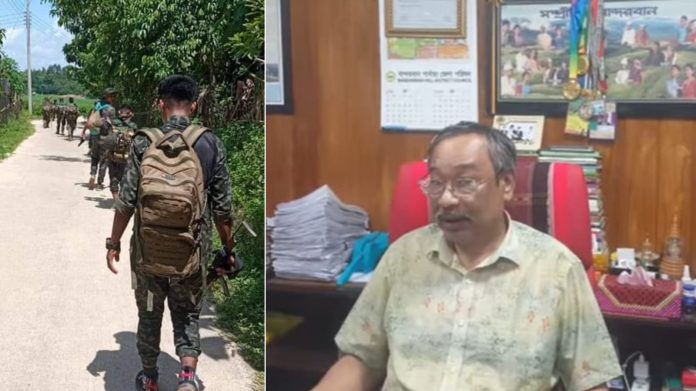 Yesterday, (Tuesday, 20 September) at 11:00 am, he organized this press conference at his office room of Bandarban Hill District Council. Journalists from all print and electronic media of Bandarban were present in it.

Ujani Para Government Primary School Headmistress Chingmayi Marma was also present there. At that time, the head teacher said that, “On September 18, I was with my students at the Bandarban Stadium for the school-based Bangabandhu Football Tournament. At this time the peon of my school phoned me and informed that an armed terrorist group had entered the school. They had many heavy weapons. Then I went to school immediately. Considering the situation, when I went to the school, the terrorist group told me that they would rest at Ujani Para Government Primary School for one night. Then I got scared and let them stay there and the next morning they left the school.”

In the press conference, the chairman Kyaw Shwe Hla said, “On Sunday, September 18, an armed terrorist group of the Mog Party stayed at Ujani Para Government Primary School in Bandarban district town between 3:00 pm and 4:00 pm. And panic spread in the area around. He earnestly appealed to the people of Bandarban as well as all the conscious people not to be panic.”

He added, “At that time I was on way to Dhaka and crossing Comilla. At around 5:00 pm, the mayor of Bandarban Municipality informed that an armed terrorist group was staying in Ujani Para Government Primary School in Bandarban Sadar. The Chairman of Rowanchari Union Parisad also informed me the matter. I also checked the authenticity of it. I informed the law enforcement agency immediately after receiving the news. I also called SP of Bandarban district, but did not get him. When I reached Dhaka the SP himself contacted me.”

He then told SP, “It is very disgraceful, terrible to have armed terrorists in a government primary school in the town. The law enforcement agency should see the mater. After that, the SP said to me, ‘I will see it’. Everyone says the terrorists are Mog Party members.”

He told reporters, “I tell SP that Ujani Para is located at the very navel center of the town. The school is just inside the village. Armed groups coming here, specially, in a government primary school is very disgusting, very sad. Not it is just disgusting but horrible and alarming too.”

At the press conference, a journalist asked that as he is the Chairman of the Bandarban Hill District Council and the Bandarban District President of the ruling Awami League, whether he has informed the government in written to take measures regarding the presence of such armed groups in the Bandarban town?

The Chairman of Hill District Council replied, “Bandarban is a peaceful district. People around the area are in fear as a terrorist group is there. But no one knows the reason for their staying. I would request you journalists to bring out the facts by writing of how they entered the town despite all the security measures are available.”

Meanwhile, a commander of Mog party named Mongthen Marma was firied with Chairman Kyaw Shwe Hla for holding a press conference on the unlawful activists of the Mog Party. Mongthen wrote on his Facebook that, “MNP members entered Bandarban district for the first time (September 16) on the request of Chairman Kyaw Shwe Hla. The next day (Saturday, 17 September) they stayed at his shelter in Ram Jati Tongpru Para of Bandarban Sadar Upazila. And on Sunday (18 September) night, MNP members were allowed to stay at Ujani Para Government Primary School in the district town of Bandarban to have meal. And now he is calling us as terrorists by holding a press conference.

Asking a question to Kyaw Shwe Hla, Mongthen further wrote, “How UPDF (Democratic) Party and MN Larma JSS get the opportunity to stay with arms in Bandarban district town?”

According to local sources, even though Kyaw Shwe Hla pretended not knowing about the Mog Party in the press conference, he is one of the main sponsors and supporters of this Mog Party. Besides, the Army and DGFI directly support and guide the Mog party terrorists.

It is also known that on 29 March 2022 at 10:00 AM, a secret meeting was held between the terrorists of the Mog Party along with Chairman Kyaw Shwe Hla. However, it was not confirmed who else was present in that meeting. The meeting is reported to have discussed plans for killing and kidnapping.

Then on 30 March 2022, 6 terrorists of Mog Party stayed in a residential hotel called ‘Four star Hotel’ located in front of DC office in Bandarban town. At that time, the chairman Kyaw Shwe Hla provided all the accommodation and food expenses. At that time, also the members of the army intelligence DGFI and NSI were in charge of constant security and care of the terrorists there.

It is to be noted that on September 18 at 4:00 PM, the said 25 armed terrorists of Mog Party were brought to Ujani Para Govt Primary School in Ujani Para of Bandarban town under the guidance of three intelligence members deployed by Bandarban Army Brigade.

Also, it is noteworthy that the Arakan Liberation Party (ALP) is an armed insurgent group in the Rakhine (Arakan) province of Myanmar. At one state, a ceasefire was reached with the Myanmar government for the dialogue to resolve the Arakan issue politically. Then most of the party’s leaders and workers, including the general secretary went to Arakan.

At that time a small number of ALP members (about 14-17) stayed in Indian state of Mizoram, instead of returning to Myanmar. Later, when their families faced various shortages including food, they came to Bolipara area of Thanchi in Bandarban district for extortion. They later recruited people from the local Marma community and changed the name ALP to Marma Liberation Party (MNP), which eventually became known as the Mog Party.

Later in 2018, prior to the parliamentary election, the local Awami League leadership brought and deployed them in Goba and Powaitu Para areas of Gaibanda Union of Rajasthali Upazila to use them in the elections. Since then it has been working for the ruling party Awami League candidates in various elections till now, it has been permanently based in Powaitu Para in Rajasthali upazila. 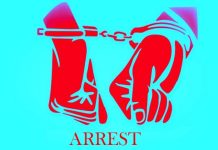 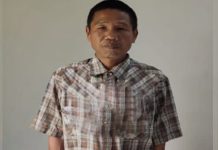