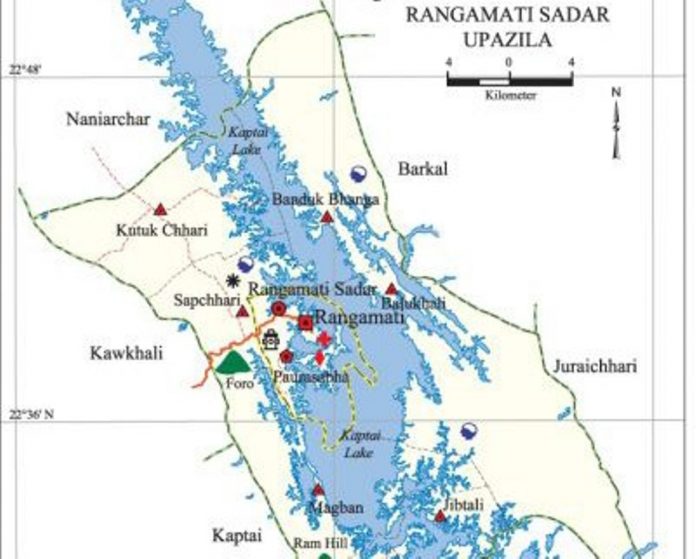 Hill Voice, 23 September 2021, Rangamati: It has been alleged that the Bangladesh army and members of the army-backed Reformist and UPDF (Democratic) terrorist groups often conduct joint patrols and military operations in Sadar Upazila, Jibtali Union and Magban Union under Rangamati upazila and Kaptai Union area of Kaptai Upazila. In these joint armed activities of the army and armed terrorists, people are often subjected to torture, harassment, house searches and threats.

A group of army personnel under the leadership of Subedar Md. Riaz in charge of S Band Army Camp and Capt. Md. Mahbub conducted patrolling operation in Bhaibonchhara area of Jibtali union at around 3:00 am on 22 September 2021. The army members were joined by a small group of Reformist and UPDF (Democratic) terrorists led by Hegera Chakma (35) and Bachchu Chakma (32), who were backed by the army and local Awami League. It is learnt that about 50 members of the army and terrorist groups took part in the operation.

It is learnt that during the patrolling, the army and terrorist group first conducted a massive search of the house of Dipak Chakma (38), son of Dinamoy Chakma in Baradhala village in Kaptai Union area and intimidated Dipak Chakma’s wife with vulgar language. Dipak Chakma was not at home at that time. He is known to be a member of the Kaptai Union Committee of the Parbatya Chattagram Jana Samhati Samiti (PCJSS).

After that, the army and terrorist members surrounded the house of Chiganya Chakma (45), son of Dilip Kumar Chakma of Kalamichara Mukh village of the same union and woke up the family members and searched the house. Chignya Chakma is known to be an innocent Jum farmer.

It is learnt that the army and terrorist members surrounded a nearby Jum (traditional farming) house and searched it. However, Sonamani Chakma (42), son of Umesh Chandra Chakma and Rangaiya Chakma (30) son of Dilip Kumar Chakma, who were there before army raid, were reportedly able to escape from there. However, at that time, the army members took away Sonamani Chakma’s driving license and smart phone and Rangaiya Chakma’s mobile phone and ID card.

On the other hand, a group of members of the UPDF (Democratic) terrorist group led by Prabesh Chakma and a group of army personnel from Kaptai army Zone jointly raided Harinchara of Kaptai Upazila and Reinkhyong Mukh, Dhalyachari and surrounding areas of Jibtali Union and fired indiscriminately. This caused great anxiety and panic among the people of the area.

It is learnt that at that time, the army members have severely beated up two innocent villagers namely Dipak Chakma, son of Binimoy Chakma and Kroliching Marma (30), wife of Dipak Chakma at Dhalyachhari village of Reinkhyang Mukh. It is also learnt that the mobile phones of some other Jumma villagers were also snatched. However, the details are not yet known.

Tonak Chakma (32) an innocent Jumma villager, was injured by firing of army indiscriminately while on patrol in Chowrachari village area of Jibtali union of Rangamati Sadar upazila under Rangamati hill district. It is learnt that some member of the UPDF (Democratic) terrorist group including Paran Dhan Chakma were seen with the army at that time on 31 August 2021,.

Three innocent Jummas named Amar Kumar Chakma (38), Rup Kumar Chakma (28) and Kajal Kumar Chakma (23) were abducted and beaten by Reformist and UPDF (Democratic) terrorists from Baghchhari Dozar area of Jibtali Union on 8 August 2021,. Two days after the abduction, they were handed over to a local army camp. It is learnt that the three villagers were released to their relatives on 9 August 2021 after being beaten by the army.

A joint team of 24 army and terrorists, including some members of the UPDF (Democratic) terrorists led by Adhir Chakma Hegera and Achentu Chakma, conducted searching operation at the nearby village of Guihabachara at around 4:00 am on 30 July 2021. Army interrogated Shanti Karbari whether there are terrorists in this village. Shobharaja Chakma of the same village was asked if he had to pay tribute and how much he had to pay. In this way, many more villagers were harassed by asking various questions, obstructing their movement.