Hill Voice, 26 June 2020, Dinajpur:  Allegations of irregularities and corruption have been reported against the Adivasi Unnayan Sangstha, Chairman and General secretary of Adivasi Cultural Academy in the distribution of stipends and educational materials among the Adivasi students allotted from the Prime Minister’s Office at Ghoraghat Upazila in Dinajpur district.

The aggrieved students lodged a complaint with their signatures at the Upazila Nirbahi Officer’s Office.

According to the deprived tribal students, the Prime Minister’s Office has allocated education stipends and educational materials and bicycles for the poor and meritorious indigenous students in the current financial year.

Shibli Sadiq, Member of Parliament for Dinajpur-6 constituency, inaugurated the distribution of bicycles as money and materials as education stipends.

Indu Mohan Mardi, Chairman of the Indigenous Cultural Academy, and George Hebram, General Secretary, and their associates Luich Mardi, Michael, Parimal, and Philip, in the name of giving bicycles and educational materials to the indigenous students have pocketed a sizeable amount of money from guardians and indigenous students in the name of providing stipend and bicycle as educational materials.

When the students protested about this, they were threatened to make them silent. The students demanded legal action against the chairman, general secretary and associates of the academy, including the refund of money taken from them.

It is to be noted that it has been reported that the students have kept video records as evidence while soliciting and taking bribes. 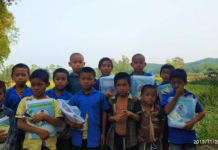 75% of indigenous students not able to take television classes