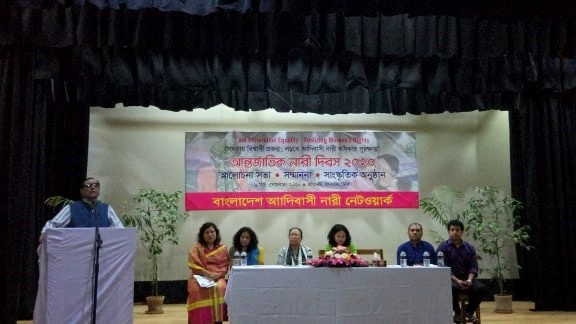 Hill Voice, 9 March 2020, Dhaka:  On the occasion of International Women’s Day 2020, an assembly of discussion, awarding honor and staging cultural function was organized by the Bangladesh Indigenous Women’s Network (BIWN) at Chhayanaut in Dhaka on 9 March 2020.

While addressing the meeting, the Workers’ Party President Menon said that at this juncture of women empowerment era, it is just due to having negative outlook and patriarchal social system, the women are still suppressed and oppressed. The condition of indigenous women even more horrible for, the indigenous peoples are dwelling at the brink. Hence, in order to safeguard the rights of indigenous women, the movement for rights of the indigenous women has to be linked with the mainstream movement of women rights. He said further that participation irrespective of males and females is a must in building a well-balanced statehood.

Former member of National Human Rights Commission, Nirupa Dewan said, despite aspiring for many things, the women cannot make their efforts fruitful in the existing reality of patriarchal society. Whereas, the role of woman is beyond question in forming up society, state and in developing human civilization. While alleging she said, in CHT, the authorities of army and civil administration thereof become die-hard to save the rapist when it comes to a case of raping an indigenous woman by a non-indigenous man. Apart from the social reality, it is due to such communal attitude of the administration, the magnitude of violence against indigenous women is getting heightened day by day.

Sanjeeb Drong, General Secretary of the BIPF said, the indigenous peoples have been discharging significant contribution for the earth, for the mankind and for making the planet worth-living ever since very birth of the earth. But with the passage of time, the basic rights of those indigenous peoples have been crippled. He said, though there is a lot of things said relating to rights of the indigenous peoples at global level but no reflection of those words is noticed at national level. Though as per declaration of independence, a state of humanitarian status is to be built, but it is absent as to this day. He called upon the youth generation irrespective of genders to count all the humans as humans and to construct the future world.

Mohammad Zahed Hossain, Program Manager of MJF, said, according to the MJF report, comparatively, degree of violence against indigenous women has been escalating throughout the country including the CHT. He called upon all the concerned to wage a movement together to get rid of the trend.

Before concluding speech of Tuli Labonyo Mrong, President of the discussion, three indigenous women were awarded honor for being successful in their respective positions. They were: Advocate Srijoni Tripura, the first indigenous woman lawyer; Bichitra Tirki, indigenous rights activist and the Entrepreneur of Hebang Restaurant.

At the end of the meeting, a magnificent cultural function was held directed by Bangladesh Indigenous Cultural Forum, Nabonita Chaudhury, U Mini Marma Su Chi and Kremlin Band – a Band Party of indigenous women.