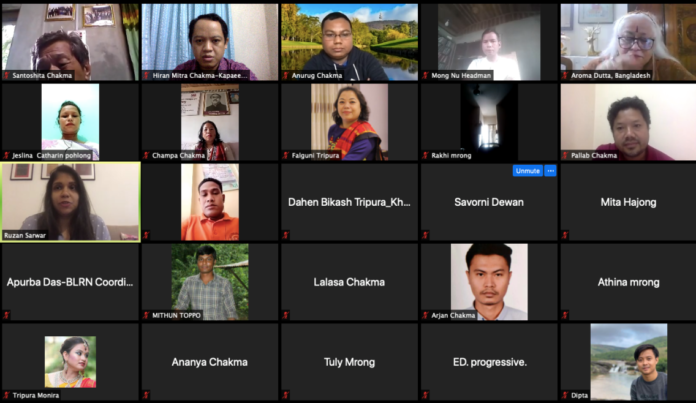 Hill Voice, 11 August 2021, Dhaka: Indigenous peoples of Bangladesh are still far behind in terms of enjoyment of human rights. The speakers expressed this opinion in an online discussion on “Human Rights Situation of Indigenous Peoples in Bangladesh” organized by the Kepaeeng Foundation with the support of the Netherlands Embassy in Bangladesh on the occasion of International Day of the World’s Indigenous Peoples on August 10, 2021,Tuesday.

Participating in the discussion, Rabindranath Soren said that the human rights reports by the Kapaeeng Foundation are published every year, but no action has been taken by the government. The government or the state is not indigenous friendly, which means there is no justice or legal action for human rights violations.

Shamsul Huda said the history of the indigenous peoples is a part of our heritage. Indigenous peoples are at the forefront of all struggles in this country. So, their human rights should be made respect and honor.

Sanjeeb Drong, general secretary of the Bangladesh Indigenous Peoples Forum, said the human rights report is very important for the indigenous peoples and the state. Indigenous peoples even need to have separate reports on each issue so that the government, media, administration and civil society can be informed and used in lobby-advocacyworks.

In her discussion, Aroma Datta, Member of Parliament and former member of the National Human Rights Commission, applauded the Kapaeeng Foundation for its human rights report. She said”We need to be more tactful. This report needs to be shared with various policy makers. The Ministry of Home Affairs, Ministry of Land, Ministry of Law and other ministries need to be contacted and discussed and thus a solution has to be reached.”