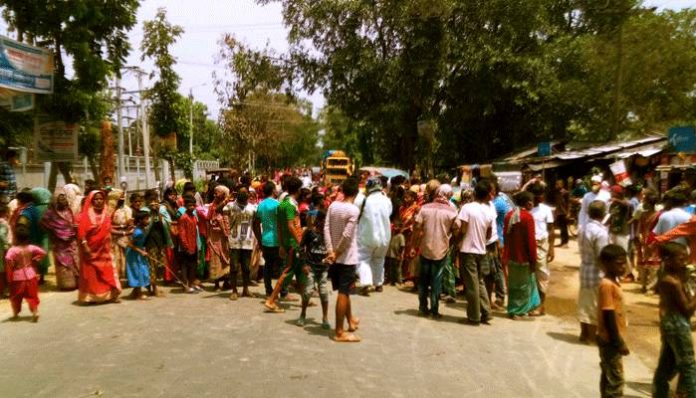 Hill Voice, 24 April 2020, Dinajpur: Indigenous people of No. 1 Chehelgazi Union Parishad of Dinajpur Sadar Upazila, have blocked roads and staged protests demanding relief who have lost their jobs due to the coronavirus.

Indigenous Peoples claimed that they did not get any help from the government and Union Parishad. They also said that the Union Parishad Members took photocopies of their voter IDs several times and also promised to help but later they did not contact with them.

At that time, they chanted slogans with different types of play cards in their hands demanding relief. Due to the road blockade, many emergency vehicles got stuck during the protest.

Gorjis Sohel, senior vice-president of Chehelgazi Union Awami League and Member of Ward No.7 of Chehelgazi Union Parishad, said, “I have personally provided food aid to 460 families, including 56 indigenous families. Many in the society are trying to help them as much as they can, he added”.

Jibon Kumar Ray, Member of Ward No. 3 of Chehelgazi Union Parishad said, “I have received 38 relief cards from the council among them 12 cards I have distributed to the indigenous community families and the rest I have given to the poor people”.

Magfurul Hasan, Upazila Nirbahi Officer of Dinajpur Sadar Upazila said, “We have already delivered food items to indigenous community.” The government is working to ensure relief for all.

Protesters lifted the roadblock after assuring that relief would be delivered to those who did not receive it in stages. Members of the army, police and law enforcement were present at the time.