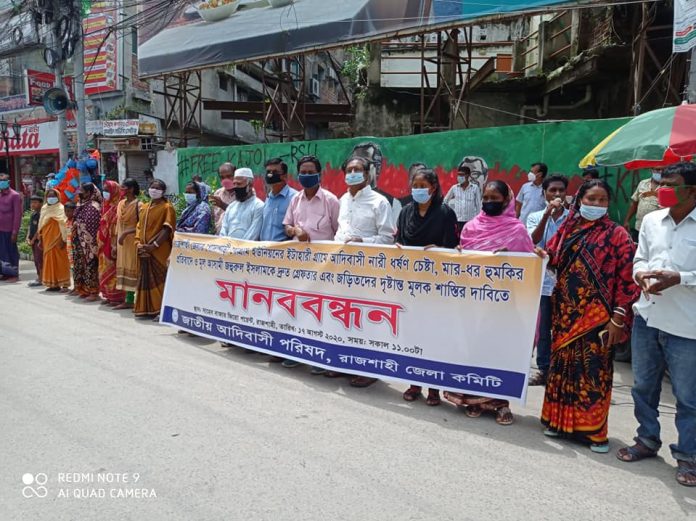 Hill Voice, 18 August 2020, Rajshahi:The Jatiya Adivasi Parishad has organized a human chain in Rajshahi to demand the arrest of the accused in the attempted rape of indigenous women in Godagari of Rajshahi district.

Speakers at the human chain said that 10 days have passed since the incident and the police have not yet arrested Zahurul Islam, the mastermind of the attempted rape. He and his terrorist forces must be brought under the law and punished quickly. The fact that the law enforcement agencies of the country are not able to punish a criminal is nothing but ridiculous. It cannot be happened that indigenous people will continue to be tortured in this way and the state will just continue to see that. The government and the state have repeatedly failed to ensure the safety of the indigenous people.

Eyewitness Sumitra Munda said, “We are scared when we are attacked. We can’t get out of the house for fear. The police told us to call 999. We, the citizens of Bangladesh, have equal rights to legal aid.”

Luchi Munda, the victim of the attack, said, “The people of Zahurul are threatening us on the streets with chopper. The road is blocked. They are threatening to beat us.”

It is to be mentioned that on the night of 8 August 2020, when the neighbor Zahurul Islam (45) entered the house of an indigenous woman and tried to rape her, the people of the area grabbed Zahirul Islam by the hand and detained him. In this incident, on 10 August 2020, the indigenous woman filed a case with Godagari police station.

Police arrested 3 people. But police have not yet arrested the main accused Zahurul Islam. However, Anikul and Sentu (40) were released on bail on August 15, 2020. Now there is panic in the indigenous village along with the family of the victimized woman. The accused parties are constantly threatening the family of the victim and the indigenous people.