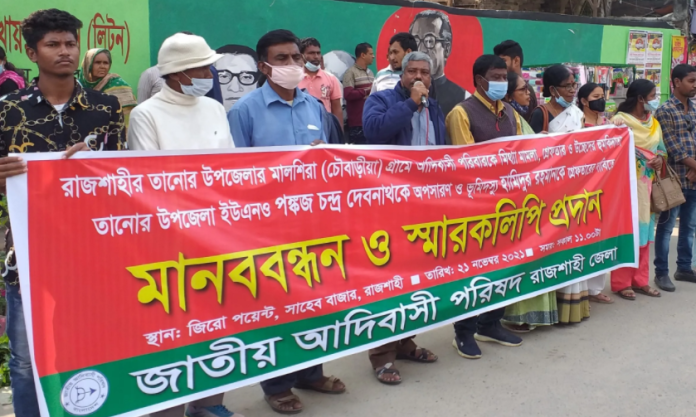 Speakers at the human chain demanded the immediate removal of Tanore Upazila Nirbahi Officer (UNO) Pankaj Chandra Debnath and the immediate arrest of Hamidur Rahman, a land grabber who tried to attack, vandalize and seize land. The speakers strongly demanded the security of the affected indigenous families of Tanore and the indigenous family of Malshira village. It also demanded a proper investigation into the distribution of allotments for indigenous peopels in Tanore upazila.

On 17 November, UNO Pankaj Chandra Debnath called the victim of indigenous family in the name of resolving the issue and on behalf of land grabber Hamidur Rahman, and falsely threatened, the victim Deban Murmu to file case, to arrest and to evict. Murmu said addressing to UNO Deben that you are the liar, conspirator and told Hamidur to file a case against victims and order the police to arrest victims. Indigenous people of the area including the families of the victims are living in insecurity.