Home International How Covid-19 could destroy indigenous communities
Facebook
Twitter
Pinterest
WhatsApp
Hill Voice, 31 julay, 2020: Indigenous peoples tend to be at higher risk from emerging infectious diseases. Covid-19 is no exception – and some experts say it could destroy whole nations and communities.

When Victoria Tauli-Corpuz stepped off the plane in Geneva in February, it was supposed to be her first stop in a multi-country mission in her role as the United Nations Special Rapporteur on the rights of indigenous peoples. Instead, new – and quickly changing – quarantine rules meant it was her last stop. The rest of the trip was cancelled.

Instead, Tauli-Corpuz flew home to the Philippines to concentrate on Covid-19. The impacts of the novel coronavirus on indigenous peoples, she had realised, “could wipe us off the map”.

Indigenous peoples around the globe tend to be at higher risk from emerging infectious diseases compared to other populations. During the H1N1 pandemic in Canada in 2009, for example, aboriginal Canadians made up 16% of admissions to hospital, despite making up 3.4% of the population.

Covid-19 is no exception. In the US, one in every 2,300 indigenous Americans has died, compared to one in 3,600 white Americans – making them the second most at-risk ethnic category in the US after black Americans. In mid-May, the Navajo Nation, whose reservation spans 27,000 square miles (70,000 sq km) in the south-western US, surpassed New York state for the highest Covid-19 infection rate in the US.

“We have fewer hospitals, doctors, ventilators – everything necessary to survive the crisis,” Tauli-Corpuz said. “Indigenous peoples also have higher rates of pre-existing conditions and poorer nutrition that leave us more susceptible.”

Amazonian indigenous groups are particularly vulnerable to dying from Covid-19 because they often live days away from professional medical help. As of 28 July, the disease had killed 1,108 indigenous people and there had been 27,517 recorded cases, with the majority in Brazil, according to data published by Red Eclesial Panamazonia (Repam). The disease has affected at least 38 indigenous nations in Amazonia. 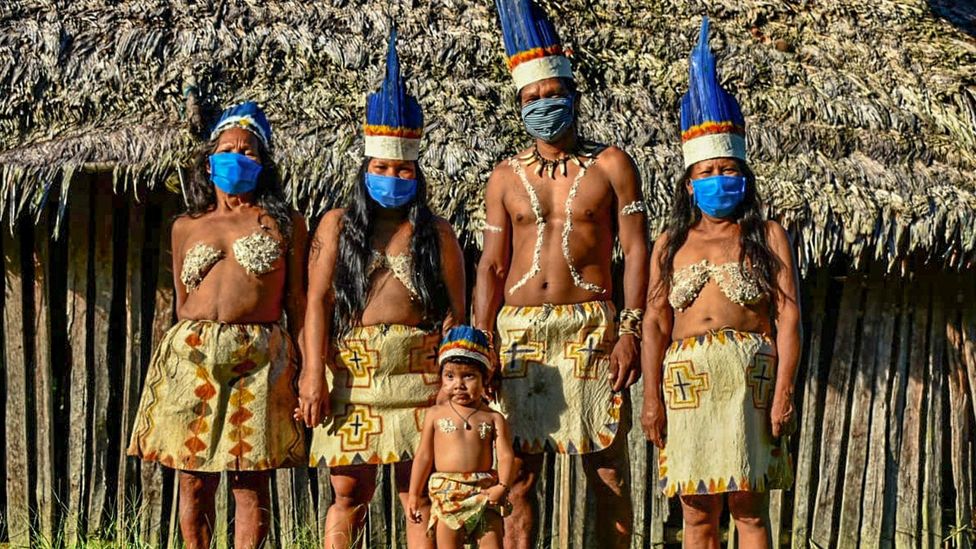 From once having 50,000 members, the Amazon’s Huitoto tribe now has less than 1,000; Covid-19 could threaten the survival of tribes like this (Credit: Getty Images)

“Now, the pandemic has created one more crisis, and as each day passes, the risk of ethnocide becomes more real.”

Indigenous communities are fighting back.

“I am amazed to see the ways that indigenous peoples are stepping up to provide support where governments have not,” Tauli-Corpuz said. “They are providing PPE and sanitation, making their own masks, and ensuring that information on Covid-19 is available in local languages, and are distributing food and other necessities.” 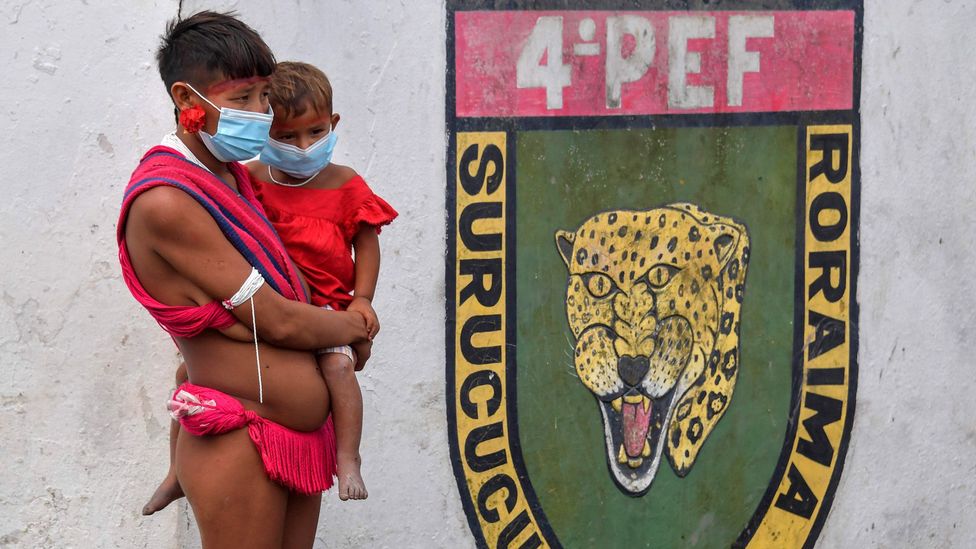 A woman and baby from the Amazon’s Yanomami tribe wear face masks at a Covid-19 testing centre (Credit: Getty Images)

They are also choosing to isolate. In Ecuador’s Siekopai nation, about 45 indigenous elders, adults and children traveled deep into the forest to their ancestral heartland of Lagartococha to escape exposure to the coronavirus, says the nation’s president Justino Piaguaje.

One grandfather died, Piaguaje says. But since their isolation, no more have died.

In Alaska, where many indigenous nations still remember the devastation of the 1918-19 influenza pandemic, more than 200 remote and subsistence Alaska communities have isolated themselves. In the South Pacific, the nation of Rarotonga, the largest of the Cook Island chain, shut down and isolated their entire island. 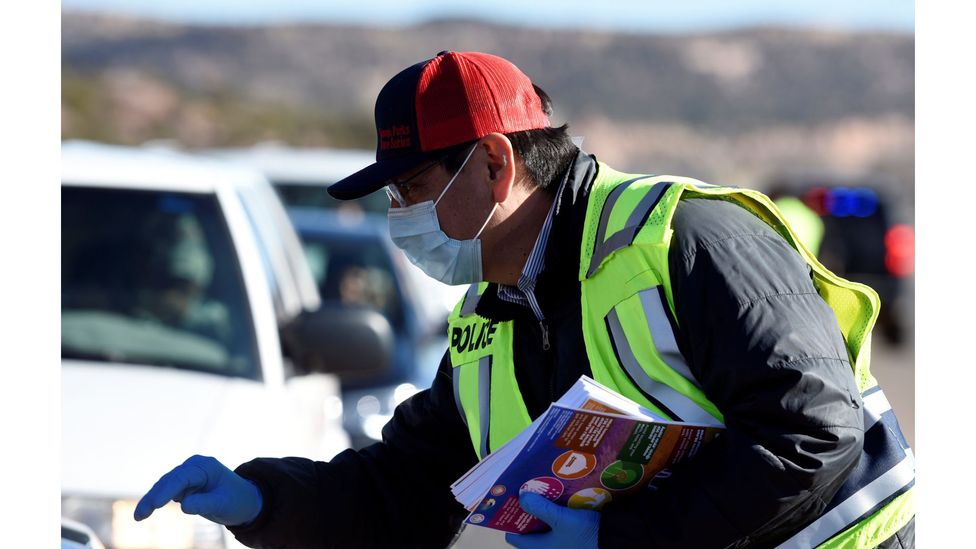 Navajo Nation President Jonathan Nez distributes educational material to drivers on how to prevent the spread of Covid-19 (Credit: Reuters)

In the US, the Navajo, like many other tribal nations, closed their borders and implemented a curfew. They also tested more than 40,000 Navajo people. “That’s over 20% of the population,” says Navajo President Jonathan Nez. “We have tested more people than any other state in the US – even many countries.

The US National Park Service reopened the Grand Canyon on 15 May, part of which lies within the Navajo Nation, against the nation’s wishes.

At the bottom of the canyon live the Havasupai, about 15% of whom are tribal elders. Many are diabetic or asthmatic, making them especially vulnerable to Covid-19. They rely on tourism to feed their families and animals, tribal leaders say, and have resorted to a GoFundMe to make up for their loss of income. 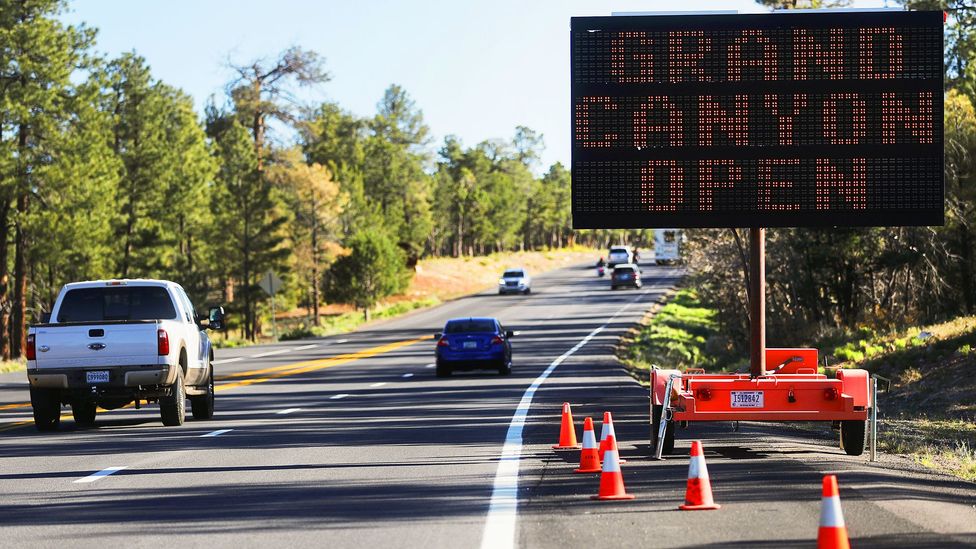 The Grand Canyon re-opened on 15 May 2020, despite concerns that visitors could contribute to the spread of Covid-19 among the Navajo nation (Credit; Getty Images)

Indeed, while Covid-19 is a major risk to communities, isolation and quarantines lead to other problems. “Communities who have been cut off from markets may not be able to get what they need to survive,” Tauli-Corpuz says.

In Africa, indigenous communities are vulnerable to Covid-19 due to a fragile healthcare system and problematic sanitation, says Hindou Oumarou Ibrahim, coordinator of the Association of Peul Women and Autochthonous Peoples of Chad. But social distancing and lockdowns could cause other problems, since people need to go to the market to buy and sell their products.

“If they don’t, they basically don’t have any food for the day,” Ibrahim says. “Our agriculture is already vulnerable due to climate change impacts and now this crisis is adding poverty to poverty.”

An additional challenge is communicating, and enforcing, lockdowns within indigenous communities. In Australia, a ban on “non-essential outings” in New South Wales means a fine of up to 11,000 Australian dollars (£6,000) and prison time for individuals that violate the ban. Aboriginal Australians, whose per capita income is 33% lower than other ethnic groups, might find it more difficult to pay these fines. Their remote locations also might mean they are less informed about pandemic policies.

Indigenous peoples and local communities can better protect themselves from the virus when they have legally recognised rights to their lands, Tauli-Corpuz says: “they can better enforce lockdowns and govern the resources they need to survive.” 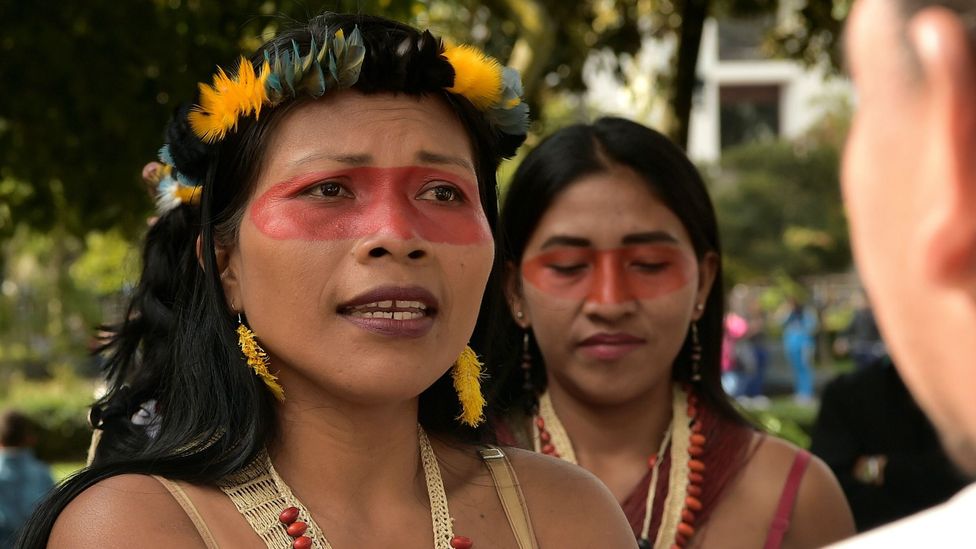 Yet there are concerns that states and private sector actors using the pandemic as an excuse to accelerate land-grabbing and human rights violations against indigenous peoples and local communities, Tauli-Corpuz says.

“Environmental regulations are being lifted in places like Indonesia and Brazil,” she says. “And in Kenya and Uganda, there has been more land-grabbing.”

Another concern for indigenous peoples everywhere is the risk to their elders.

“Our elders have expert knowledge of our plant medicines and shamanic healing, but not all of their knowledge has been passed on to the younger generations,” says Nemonte Nenquimo, president of the Coordinating Council of the Waorani Nationality of Ecuador-Pastaza. 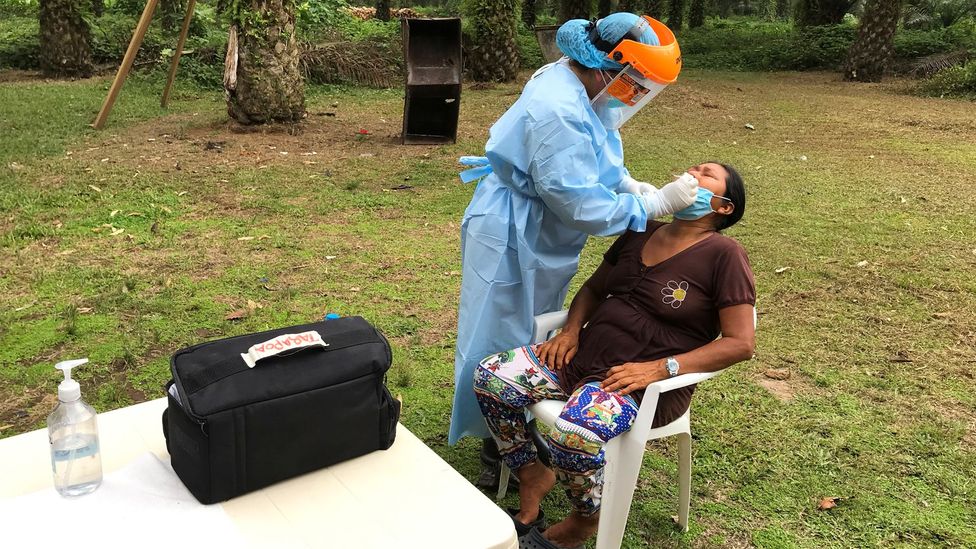 A member of the Siekopai nation is tested for Covid-19 in Ecuador (Credit: Amazon Frontiles y Alianza Ceibo via Reuters)

Because their knowledge is passed down through their oral traditions and culture, when elders die before they have had a chance to teach what they know, it can be lost forever.

“It is learned from the web of life, which every living being has taught us in order to build and live a harmonious life,” says 80-year-old Delfin Payaguaje, shaman of the Siekopai from Waiya in eastern Ecuador and northern Peru.

“Without our knowledge, we lose our identity, our culture and our cosmovision.”

“We are concerned about this situation we face. The grandfather who died took with him his traditional knowledges. We fear we could lose an entire historical memory of a people.”

Indigenous peoples around the world already faced a myriad of threats. Those like Salazar-Lopez worry that, more than an additional crisis, the pandemic could be the one that some nations cannot survive.

* This article has been updated on 31 July 2020 to correct an error in the number of indigenous people in Amazonia that have been killed and infected with Covid-19. The earlier version of this article inaccurately reported that the disease had killed 19,329 indigenous in Amazonia and that there had been another 677,719 confirmed cases. The correct values are 1,108 deaths and 27,517 confirmed cases. The BBC values the accuracy of its reporting extremely highly and make every effort to double check sources of information. We would like to apologise to our readers for the error on this occasion.