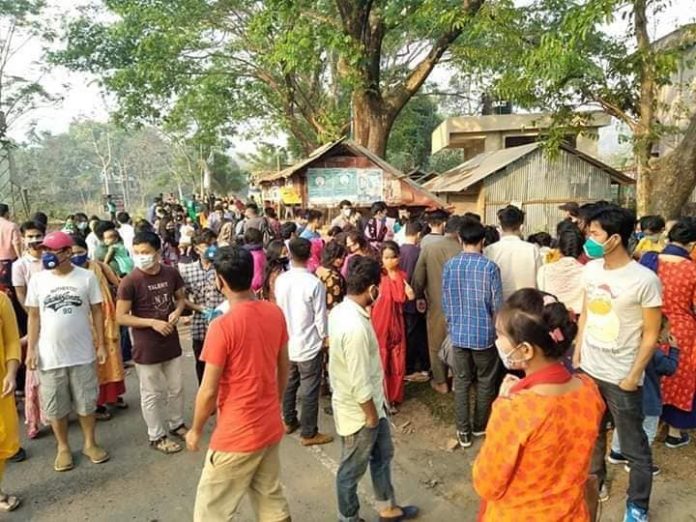 Hill Voice, 16 April 2020, Khagrachari:  At Nayabazaar, on the border line of Fatikchhari Upazila of Chittagong district and Manikchhari Upazila of Khagrachhari hill district, the army and cops barricaded almost 1000 home-bound Jumma workers who, putting their lives at stake, were returning from Dhaka, Savar, Chittagong and Comilla to their own homesteads in various areas of Khagrachari hill district, amid ‘Lockdown’ due to COVID-19 pandemic.

The cops meted out random baton-charge upon the Jumma laborers while they protested against the blockade at 11:00 a.m. on 16 April 2020. At this, a good number of workers including the women sustained injuries. It is learnt that the condition of Sumita Dewan (21), Rita Chakma (19), Shanti Priyo Chakma (22), Shewli Chakma (16) and Rima Chakma (19) were critical among the persons injured. Among them, Sumita Dewan’s house is in Mubachhari under Mahalchhari Upazila of Khagrachhari hill district and Rita Chakma’s house is in Baghaihat of Baghaichhari Upazila under Rangamati Hill district. It was known that during that moment, as the two injured Jumma women were taken to the local pharmacy for treatment. As per the source of information, Tamanna Mahmud, on behalf of Khagrachhari District Administration was present in the spot during the mayhem.

It is to be worth mentioning that following the first detection of COVID-19 virus infected expatriate worker coming from abroad on 8 March 2020 and the subsequent situational developments, the Bangladesh government, instead of ‘Lockdown’ declared nation-wide ‘Public Holiday’ in steps. Accordingly, the educational institutions, offices and other government and non-government agencies were supposed to re-open after 4 April 2020. But the span of ‘Public Holiday’ was further extended up to 14 April 2020, which has been further extended till 25 April 2020 since when the Ramadan begins.

With the first declaration of ‘nation-wide public holiday,’ thousands of the garment wage earners began to leave their industries by roads and waterways despite imposition of restrictions over the public transports of distant destinations. The Jumma garment wage earners of CHT were also of no exception. They had also left their working industries and returned back to their homes in safe and sound health.

Meanwhile, the COVID-19 infection began to show its probable gravity of which, the government, apparently was in a state of confusion and indecision. The garment owners declared opening of their industries and issued a short notice to their workers asking them to join for duties by 4 April 2020 sharp failing of which could lead to dismissal from their jobs. This prompted thousands of wage earners to go back to the major cities including Dhaka with bag and baggage while man-packing their children, as all the means of transports had already been suspended. After arrival through hazardous journeys amid the COVID-19 panic, the wage earners were shocked to find fresh closure notices hanging from the gates of their working industries, as the garment owners had taken a U-turn and decided to close their industries in the face of nation-wide criticism. The government disowned the claim of garments owners stating about receipt of the government official consent for re-opening the industries. Now, as the garment owners denied to pay salaries, the stranded wage earners have landed in a fix.

In the meantime, the ‘nation-wide public holiday’ has got transformed into a nationwide ‘lockdown’ preventing inter-district in-going and out-going without declaration on part of the government. In this critical juncture, the Jumma wage earners, instead of taking to street along with their fellow brothers and sisters, went in for own arrangement for going back to their homes in CHT.

As meanwhile, the District Administration has closed all the entrances to Khagrachhari to prevent the COVID-19 infection, these hundreds of Jumma workers have been blockaded at Naya Bazaar, the district boundary area. Many of them are females. The Jumma workers who have been held up allege that they are neither being allowed to go to Khagrachhari nor to go back to the cities from where they came.

It is learnt that at the army Check Post by Khagrachhari-Fatikchhari boundary point Nayabazaar, the army and cops held several hundred home-bound garment workers of Jumma people origin moving from Chittagong to Khagrachhari on 15 April 2020. Earlier, some people were also held at Zero Mile area- the entrance point of Khagrachhari town.

However, though directive includes maintaining of social distance, yet they people held there were kept in cramping. As a result, the people of conscience consider the measure to be a risk for increase of infection. They are criticizing such mismanagement of the District Administration. The concern civic society urged the Administration to send those hundreds of working people for quarantine immediately at their respective native villages. 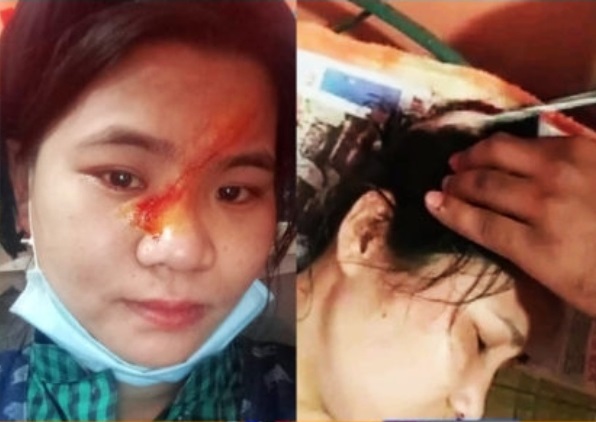 The distinguished scientist and American expatriate Mong Sanu Marma Bathowai, in his Face Book Status expressed his resentment saying: “What sort of kidding is this! What has the administration done to the working people, laborers and ordinary masses? Thousands of people are stuck at various entrance points of Khagrachhari, Rangamati – Manikchhari and Ranirhat. They are not being allowed to enter own homesteads and the administration has no arrangement for food and shelter for them there. Some cops have begun realizing of money under extortion from them. By baton charge, the cops caused serious injuries to many including one cute girl. In the cities, their working industries are locked off and no salary they received. On returning back to own villages, they may survive and this journey is for that purpose. Scenario of the kind is to be seen throughout the world. One day, the world will be free from the global disaster due to Corona Virus. But will we ever be able to get rid of our conscience for doing such irrational acts? How can we hide this shame? In rolling tears, my heart-breaking words, right at this hours, photographs of such kind are too unbearable and painful to me…” he mentioned. 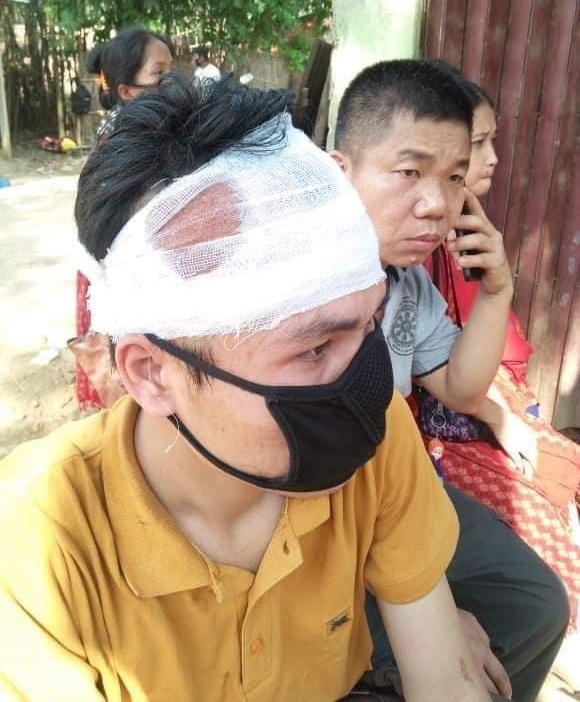 Another person named ‘Samma Ditti’ wrote on his/her Face Book wall: “If hundreds of people can enter Bangladesh by air line, then, why can’t we go back to our own mother land, the CHT? I want an answer from the District Administration and the government of Bangladesh. I convey strong protest and condemnation against such actions of the army and police administration. I want safe return to my home. Why can’t we be allowed to enter our own areas? I want an answer.” – He mentioned.

One user named Manti Chakma CHT gives a status on her FB wall saying: “This situation with the Jumma workers has risen up due to wrong decision on part of the government. Instead of finding a solution, a certain quarter seated in the power is perpetrating all this so as to make the situation more complicated.

Another FB user named Shanti Priyo Bhikkhu writes in his FB status: “Closure declaration of the Garment industries has been promulgated at such a moment when the whole country has already been under undeclared ‘lockdown.’ In this circumstance, the garment laborers can neither go back to own homes nor can they stay back in the cities. Under such situation, while bidding their lives at stake, the laborers had to face another battle of life risking their lives. 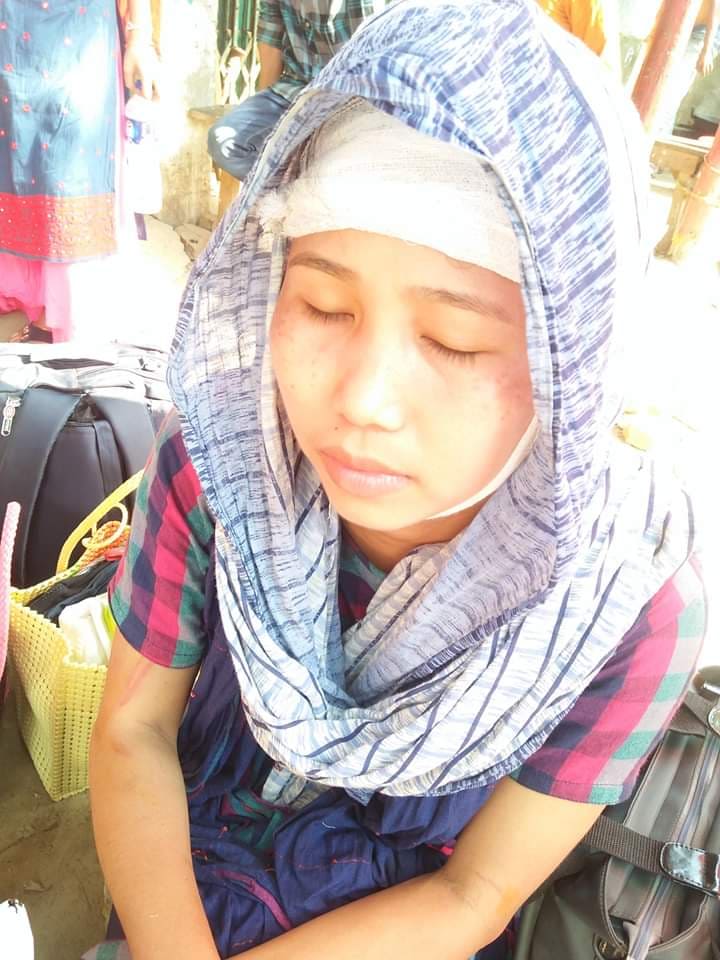 Bachchu Chakma, another FB user writes a status saying: “It is due to wrong done by the garment industry owners and the government, this kind of situation has risen up. The irresponsible move of the garment owners and government can never be acceptable. Even being so, why such brutal attack was meted out upon the working-class people? – He threw a question.

Kalayan Talukder writes in his FB status that while the laborers made a walk for twice to proceed towards their own homesteads, the cops randomly carried out baton charge and beating at Naya Bazaar of Khagrachari-Manikchhari roadside and at Ramgarh-Sonaipul army Check Post leaving many people severely injured. At present, the EPZ workers are passing sub-human life under various threat including that of COVID-19. He appealed to the Prime Minister and all the 3 Members of the Parliament of CHT to consider their going own homes on humanitarian ground and keep them under quarantine surveillance.