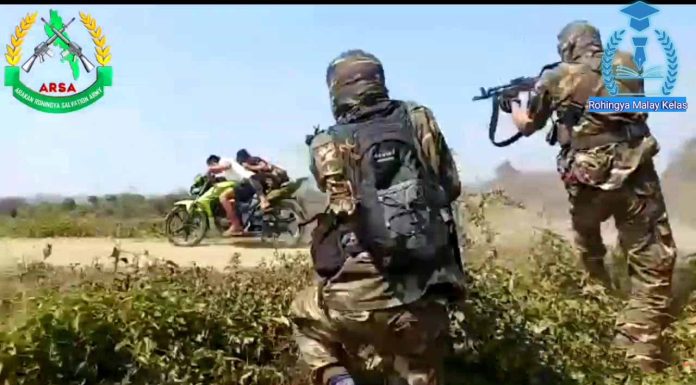 Hill Voice, 20 January 2022, Special Correspondant: Reliable source reveals that fatal conflicts have been being taking place over a couple of months between the armed Rohingya Muslim Militant groups and Arakan armed rebels staying along the Bangladesh-Myanmar borderline of Ghundhum Union of Naikhyongchari upazila in Bandarban. This has claimed lives of several dozens of fighters belonging to the Rohingya Muslim armed organizations namely, Arakan Rohingya Salvation Army (ARSA) and Rohingya Solidarity Organization (RSO) while, on the other hand, leaving many fighters of the Arakanese Guerrilla force killed in the conflicts – the source stated. At this, inhabitants of the border line areas are being obliged to pass their days in extreme fear.

The local sources affirm wide-spread battles for two days between the Rohingya Muslim militant organizations namely, ARSA/RSO and Arakanese rebels along the areas of Bangladesh-Myanmar Border Pillars-37 and 38 of Ghundhum Union on 13 and 14 January 2022.

It is further known that in the morning of 12 January 2022, one member of the Arakanese rebels was held by the ARSA/RSO men while he was collecting brinjals from a Jum (hill slope of shifting cultivation) plot. The ARSA/RSO militants met out inhuman beating upon him. Later on, the Arakanese man could somehow enable to escape from the captivity.

Afterward, hundreds of Arakanese rebels went out and attacked the ARSA/RSO camps. The conflict lasted till the evening on 14 January 2022 and many ARSA/RSO militants were killed and injured – the source said. Even many ARSA/RSO militants were sighted leaving military uniform and fleeing in civil attire via Baishari area of Ghundhum union – the source added.

On the other side, it was learnt that towards the early November 2021, the ARSA/RSO militants had taken control over the surrounding area of the International Border Pillar No. 42 from the hands of one Arakanese rebel group, adjacent to Gachhbania Tanchangya Para of Ghundhum Union under Nakhyongchari Upazila.

A little Northward from the Gachhbania village, there stands a BGB camp at Nikuchhari under the care of which the ARSA/RSO armed members had been camping. Towards the end of October 2021, a huge number of ARSA/RSO militants had amalgamated there. On 30 October 2021, an open-hood jeep (locally called ‘vehicle of the moon’) was heavily loaded with rice and various consumer goods meant for the ARSA/RSO militants was brought to the Gachhbania village and on 31 October a truck loaded with rice was also brought to the village.

It was learnt that the ARSA/RSO militants conducted an attack on the big Brigade of Arakanese rebels at wee hours of 1 November 2021 near Border Pillars 39 and 41. Sounds of heavy exchange of firings were heard for more than an hour towards 3:00 to 4:00 am that day. The attack was carried out during the time when the Arakanese rebels were busy with dancing and drinking.

The Gorjanbania village, even being the main center of communication to the Arakanese rebels, no member of them was found available there to collect goods on the next day of 2 November 2022. The ARSA/RSO blocked their approaching road to Gorjanbania that day. It was learnt that the Arakanese rebels could not carry their wounded members to nowhere for medical treatment. Even, no villager could go for work in the Jum and plantain plants due to prevention of the ARSA/RSO militants, that day.

It was learnt that approximately a dozen of Arakanese rebels were killed in the attack. Of them, most were female fighters while 13 members of the attackers were also killed. Approximately, 150 members of ARSA/RSO took part in the attack while some groups having 30-40 members in each took position at various locations by the roadside in the hills.

In order to take retaliation of the ARSA/RSO attack, the Arakanese rebels carried out an attack on the ARSA/RSO camps located at the east of Thoyainga Jhiri BGB camp, at dawn on 2 November 2021. Some dozen members of ARSA/RSO militants were reportedly killed during the attack and many were taken as captives. In order to escape from the Arakanese attackers, some 70-80 ARSA/RSO militants fled away and took shelter in the plantation of former Ghundum Union Chairman Khairul Bashar and Aunga Mraung near Kutupalong Barua Para.

On the other end, following the incident, 5 more barracks were erected inside the ARSA/RSO camp under control of Nikuchhari BGB camp near Border Pillar-42. The ARSA/RSO members who fled away during attack are estimated to have found their shelter in these newly built camps. The local sources stated that firing sounds were also heard coming from the areas of Jamirtali Para Khal and the nearby hills where the ARSA/RSO were camping. Sounds of heavy firing were also heard coming from the surroundings of Border Pillar-42 at night of 5 November 2021.

It has been learnt that the Arakanese rebels had been requested by the Bangladesh Army Intelligence Agency not to attack upon the ARSA/RSO militants.

Photo: Major Rashed in white shirt, Major Zia in army uniform and the old Maulana is the citizen of Afghanistan.

From a reliable source, on 15 December 2021, it was learnt that 2 Major ranking military officers of Bangladesh Army and 1 Pakistan-born Afghan citizen have been found staying at ARSA/RSO camp near Nikuchhari BGB camp adjacent to Gachhbania Tanchangya village close to the Border Pillar 42.

Major Rashed and Major Zia are the two Bangladesh Army Officers who are known as Engineers in the ARSA/RSO camp. The two Major ranking officers had fled away from the Sylhet Cantonment in 2020 and now, they have been found conducting militant activities in association with the BGB personnel of Nikuchhari BGB camp of 268 No. Reju Mauza under Nakhyongchhari Upazilla, during the 2/3 months. In November 2021, the ARSA/RSO militants conducted house searching in several Tanchangya community villages including Jamirtali village. During such a search, 7-8 member group of ARSA/RSO group led by Major Zia conducted the search in the Gachhbania village and another house searching campaign was conducted by a Special Patrolling Party of Reju Para BGB camp jointly with ARSA/RSO militants, escorted by two motor-cyclists.