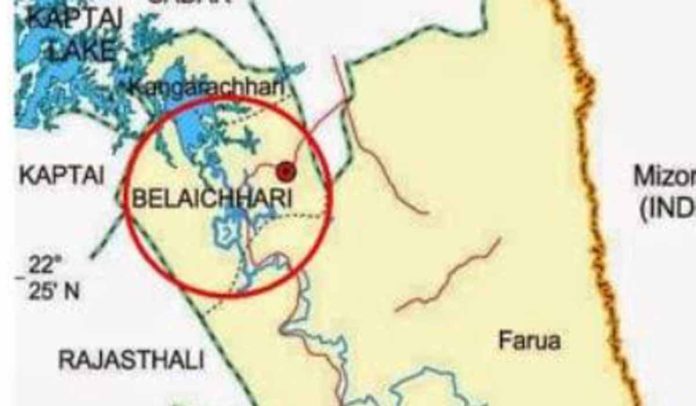 Hill voice, 29 December 2021, Rangamati: It is learnt that eviction panic is prevailing among the villagers in Digholchari Adarsha village of Ward No. 4 of Bilaichari union of Bilaichari upazila in Rangamati district due to approval of project of Development Board for construction of bridge over lake for Bilaichari army zone.

Alok Jyoti Chakma (38), son of late Dirbo Chan Chakma, one of owners of land, has already been ordered by the zone commander to vacate their recorded homesteads.

On the other hand, the land documents of some families of permanent residents of the same area includingin 1. Uttam Chakma (45), Secretary of the no1 Bilaichari Union Parishad, 2. Anil Kanti Tanchangya (56), son of late Herod Moni Tanchangya, 3. Rabindranath Tanchangya (52), 4. Swarna Kumar Chakma, son of late Kalachitti Chakma, and 5. Bappi Chakma (32), son of late Koi Da Prue Chakma have already been investigated. At present, most of the families in Digholchari Adarsha village, including the above families, are said to be in fear of eviction.

On condition of anonymity, some villagers said that the innocent Jumma people of the area have been living in fear of eviction ever since the contruction of first bridge by Bhadrasen Chakma, former UP member of Bilaichhari Union Parishad and former chairman of UP committee of Awami League.

There is intense anger and panic among the locals about the issue.