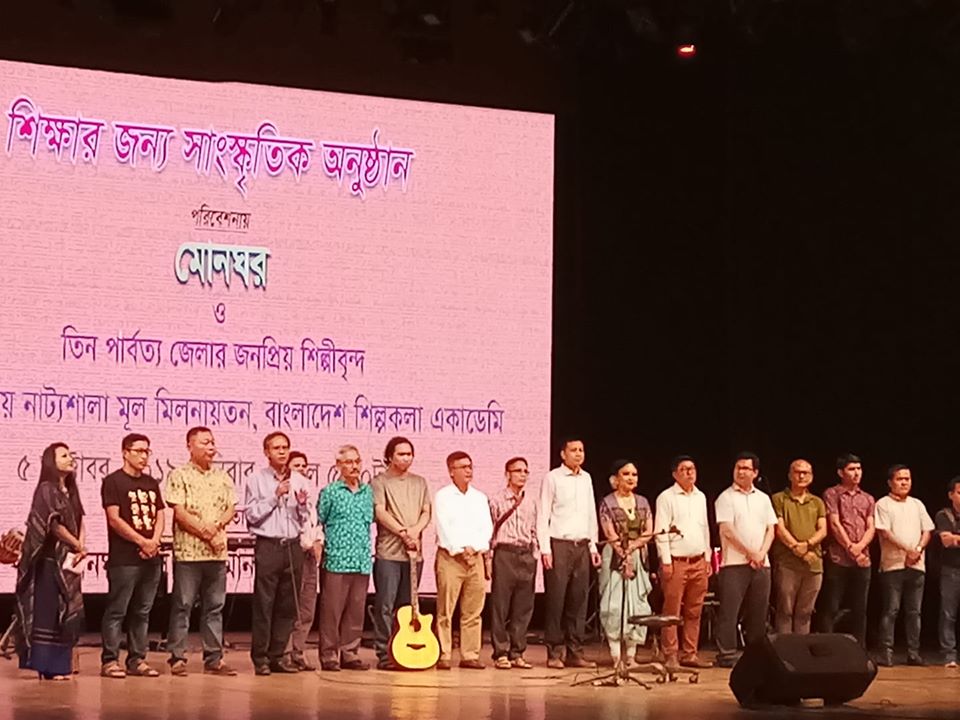 The Moanoghar, a popular educational institution in CHT, has sparkled its light of education in remote areas in the hill. Many more orphans have taken their place in the country as well as in abroad studying from this institution. This institution established in 1974 has a good reputation but it has numerous challenges too. It has been conducting through mass-donation since its birth/foundation. Besides, this institution is being supported by humanitarian aid by many well-wishers across the country and the abroad specially the ex-students of Moanoghar who are conducting the Moanoghar Help Program. Almost 86 students who are poor but brilliant studying in different higher educational institutions are given a monthly fund through this program which was started with only 15 students in 2011. The organizers said that this cultural program is for the expansion of the humanitarian fund.

Kirti Nishan Chakma, ex-student of Moanoghar and general secretary of Moanoghar Management Committee delivers his inaugural speech before starting the colorful cultural program which was took place in the central auditorium of Shilpokola Academy. He said that Moanoghar teaches her students to dream high and to respect the diversity. Different languages and cultures of indigenous communities in CHT are the main symbol of diversity that every student of Moanoghar practice. This cultural program is a function/gathering with creative artists of Moanoghar and the famous singers and Bands of CHT, he added.

Executive director of Moanoghar, Ashok Kumar Chakma, told this reporter that this is the first program of Moanoghar in Dhaka city. He also expressed that there are three aims in this program. Firstly, to encourage the Jumma service holders and mainstream peoples across the country in humanitarian actions. Secondly, making responsibilities and liabilities for the root and future generation. And finally, to introduce the cultural diversity of CHT in Dhaka.

Attack on Pujomandap in Comilla, Unity council demands arrest and punishment of miscreants

Human chain with slogan ‘want schools in Jumma-inhabited areas, not mosques’ in Sajek and Baghaichari